Chemical Composition of the Human Body 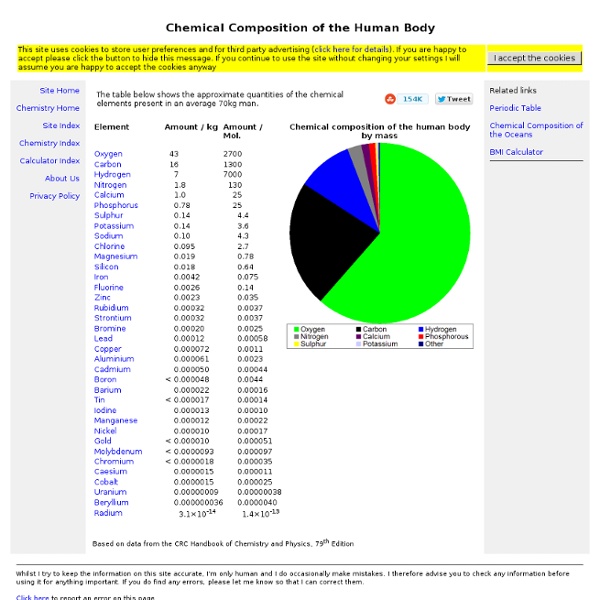 It's All About Carbon If you have questions about climate change, please e-mail them to All Things Considered or call the show at 202-898-2395. When the subject is global warming, our mood is usually "uh-oh." Which makes sense, because a warmer Earth will lead to all kinds of disruptions and expensive adjustments that we could do without. NPR and National Geographic take a year-long journey around the globe to explore how climate is shaping people and people are exploring climate. Odd Todd But there is another way to think about all of this. What we have done here is a chemistry lesson, one that begins with the elemental cause of global warming: the behavior of the carbon atom. And since carbon atoms are rather small, we have turned our atom into a cartoon. This is the introductory segment of a five-part series that explains how carbon atoms form bonds, break apart and create the conditions that can lead to global warming. In this, the first lesson, we introduce our atom. So take a look.

Ten things you don’t know about the Earth Look up, look down, look out, look around.— Yes, "It Can Happen" Good advice from the 70s progressive band. Look around you. Unless you’re one of the Apollo astronauts, you’ve lived your entire life within a few hundred kilometers of the surface of the Earth. There’s a whole planet beneath your feet, 6.6 sextillion tons of it, one trillion cubic kilometers of it. Below are ten facts about the Earth — the second in my series of Ten Things You Don’t Know (the first was on the Milky Way). 1) The Earth is smoother than a billiard ball. Maybe you’ve heard this statement: if the Earth were shrunk down to the size of a billiard ball, it would actually be smoother than one. OK, first, how smooth is a billiard ball? The Earth has a diameter of about 12,735 kilometers (on average, see below for more on this). The highest point on Earth is the top of Mt. Hey, those are within the tolerances! But would it be round enough to qualify? 2) The Earth is an oblate spheroid The Earth is round! Bummer. Mt.

Chemical Bonds Selected by the SciLinks program, a service of National Science Teachers Association. Copyright 2001. For an explanation of the significance of this logo go to: Because of the tendency of atoms to complete their outer energy shells with the stable number of electrons for each shell, atoms with incomplete shells have a tendency to gain electrons, lose electrons or share electrons. Atoms that have gained or lost electrons become ions. Oppositely charged ions form ionic bonds. Ionic bonds The following animation shows how ions of sodium and chlorine are formed. The oppositely charged ions in the animation will be attracted to each other and form an ionic bond. Covalent bonds Atoms can fill their outer shells by sharing electrons. In the animation, two hydrogen atoms share each other's electrons and form a molecule of hydrogen. Covalent bonds can be nonpolar, or polar. Hydrogen bonds Back to Chemistry Back to Steinberg Web Pages © Dr.

What would happen if I drilled a tunnel through the center of th" Want to really get away from it all? The farthest you can travel from home (and still remain on Earth) is about 7,900 miles (12,700 kilometers) straight down, but you'll have to journey the long way round to get there: 12,450 miles (20,036 kilometers) over land and sea. Why not take a shortcut, straight down? Of course, you'd be in for a rough ride. For sake of argument (and survival) let's pretend the Earth is a cold, uniform, inert ball of rock. At the Earth's surface, gravity pulls on us at 32 feet (9.8 meters) per second squared. You're still moving at a heck of a clip, though, so don't expect to stop there. Of course, reality has a tendency to intrude on even the best thought experiments.

Types of Bonds Custom Search Bonding Links <-- Back to electronegativity Electronegativity Differences between atoms can be used to determine the type of bonding that occurs. If the difference between 2 atoms is small (less than 1.7) the bond is covalent. If the difference is large (greater than 1.7) the bond is considered ionic. Exceptions- HF is covalent not ionic (difference of 1.9) BF3 is covalent (difference of 2.0) BeF2 is covalent (difference of 2.5) Covalently bonded atoms will share their electrons in order to form a stable outer electron shell that has 8 electrons. This is called an octet of electrons. Ionic is 1 minute in. Ionic bonded atoms will transfer one or more electrons from the less electronegative element (a metal) to the more electronegative element (a nonmetal) as to achieve an octect of electrons. This results in the formation of 2 ions. The bond is a strong electrostatic attraction formed by 2 opposing ions. Chemical Demonstration Videos

Hours of daylight vs latitude vs day of year.png - Wikipedia, the free encyclopedia DNA-RNA-Protein DNA carries the genetic information of a cell and consists of thousands of genes. Each gene serves as a recipe on how to build a protein molecule. Proteins perform important tasks for the cell functions or serve as building blocks. The flow of information from the genes determines the protein composition and thereby the functions of the cell. The DNA is situated in the nucleus, organized into chromosomes. The document has two levels, basic and advanced. Learn how to navigate in the document io9 Membranes Organize Cellular Complexity Membranes organize proteins and other molecules enabling the cell to run much more efficiently than if everything were floating freely. Mitochondrial membranes, for example, keep protein assembly lines together for efficient energy production. And the lysosome safely holds enzymes that would destroy essential proteins if released into the cytoplasm. Membrane-enclosed vesicles form packages for cargo so that they may quickly and efficiently reach their destinations. Real life complexity inside an insulin-producing pancreas cell. Image courtesy of Dr. Phospholipids provide the framework for all membranes in the cell. When phospholipids are placed into water, they organize themselves into a structure called a bilayer. The shape and chemical nature of phospholipids drives them to organize themselves one level further. Phospholipid membranes form a barrier that most molecules cannot cross. Membrane proteins represent a large number of proteins with diverse functions.

Ask a Physicist: How long does it take for you to fall into a black hole? - io9 @Pants McCracky: What our friendly physicist didn't explain is that the difference is perceptual. Time doesn't "slow down" as you approach the event horizon because time isn't a universal thing. Okay, so imagine you're carrying a big clock as you approach the event horizon, and I'm carrying a synchronized clock with me. As you fall closer to the event horizon, it will look like your clock is running slower than mine. But from your perspective it's totally different.

The Cytoskeleton Cells contain elaborate arrays of protein fibers that serve such functions as: establishing cell shape providing mechanical strength locomotion chromosome separation in mitosis and meiosisintracellular transport of organelles The cytoskeleton is made up of three kinds of protein filaments: Actin filaments (also called microfilaments) Intermediate filaments and Microtubules Actin Filaments Monomers of the protein actin polymerize to form long, thin fibers. These are about 8 nm in diameter and, being the thinnest of the cytoskeletal filaments, are also called microfilaments. (In skeletal muscle fibers they are called "thin" filaments.) Intermediate Filaments These cytoplasmic fibers average 10 nm in diameter (and thus are "intermediate" in size between actin filaments (8 nm) and microtubules (25 nm)(as well as of the thick filaments of skeletal muscle fibers). There are several types of intermediate filament, each constructed from one or more proteins characteristic of it. Microtubules

Cloning mammoths may lead directly to prehistoric zombie apocalypse Royal BC Museum, Victoria, British Columbia. Here's an excellent idea that hasn't ever been illustrated as a catastrophic example of scientific hubris in a series of incredibly popular action-horror movies in which people innocently sitting in the john are savagely eaten by giant prehistoric things with big teeth: A researcher at Kyoto University has announced plans to clone, produce and raise a wooly mammoth of a species that died out more than 5,000 years ago, then do it again, enough times to create a kind of Ice-Age version of Jurassic Park, probably without all the screaming and running. There's some debate about the project. The group of Japanese scientists on the cloning team -- led in the mammoth-making effort by Akira Iritani of Kinki University's School of Biology Oriented Science and Technology -- think the cells are actually from more of a wooly rhinoceros sort of thing. Mammoths aren't the only things being cloned, of course. To these I say: Shut up. Or we slaughtered them all.

Cell Size and Scale Some cells are visible to the unaided eye The smallest objects that the unaided human eye can see are about 0.1 mm long. That means that under the right conditions, you might be able to see an ameoba proteus, a human egg, and a paramecium without using magnification. A magnifying glass can help you to see them more clearly, but they will still look tiny. Smaller cells are easily visible under a light microscope. It's even possible to make out structures within the cell, such as the nucleus, mitochondria and chloroplasts. To see anything smaller than 500 nm, you will need an electron microscope. Adenine The label on the nucleotide is not quite accurate. How can an X chromosome be nearly as big as the head of the sperm cell? No, this isn't a mistake. The X chromosome is shown here in a condensed state, as it would appear in a cell that's going through mitosis. A chromosome is made up of genetic material (one long piece of DNA) wrapped around structural support proteins (histones). Carbon

Parts of the Cell - Cells Alive! For life all cells have basic needs. Cells have diverged in their structure and function to accommodate these survival requirements. Here are some KEY TERMS to help you think, explore and search for similarities and significant differences that have become the characteristics of eukaryote (animal, plant) and prokaryotic (bacteria) cells. Examples might be searching: eukaryote prokaryote reproduction or animal plant cell energy. Reproduction / cell division Energy trapping, storage and consumption Form / shape / structure Cell specialization Compartmentalization of cell functions Communication within and beyond the cell Cell / organism survival