50 Most Influential Books of the Last 50 (or so) Years 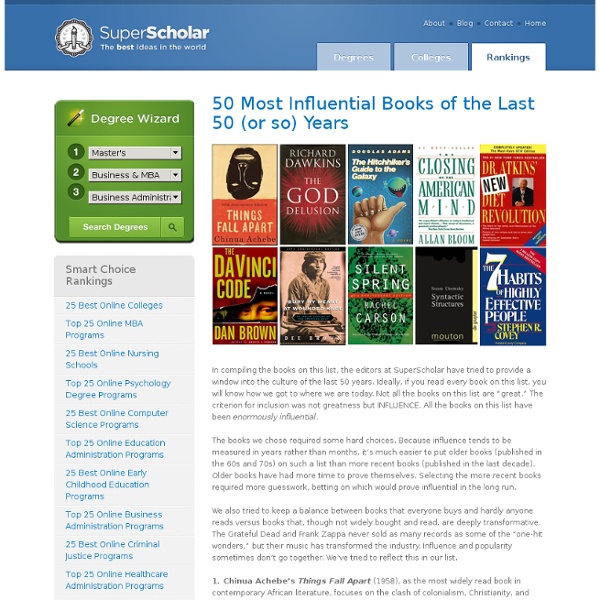 18 Great Reads That Changed My Life It’s fairly easy to find a well written book or online article. But it’s not always easy to find one with genuine value that you connect with. That’s because, these days, books and online articles are a dime a dozen. While Some Are Shocked by ‘Go Set a Watchman,’ Others Find Nuance in a Bigoted Atticus Finch “Whether you’ve read the novel or seen the film, there’s this image you have of Atticus as a hero, and this brings him down a peg,” said Adam Bergstein, an English teacher in Queens whose 10th- and 11-grade students read “Mockingbird.” “How do you take this guy who everybody looked up to for the last 50-plus years, and now he’s a more flawed individual?” In this version, Atticus is 72 years old, suffering from arthritis and stubbornly resistant to social change. He stands in sharp contrast to the gentle scholar in “Mockingbird,” who tells Scout, when explaining why he has gone out on a limb to defend a black man, that “I do my best to love everybody.” In “Watchman,” which comes out Tuesday, Atticus chides Scout for her idealistic views about racial equality: “The Negroes down here are still in their childhood as a people.”

30 Books I’m Glad I Read Before 30 In various ways, these 30 books convey some of the philosophy of how Angel and I live our lives. I honestly credit a fraction of who I am today to each title. Thus, they have indirectly influenced much of what I write about on this site. A medley of both fiction and nonfiction, these great reads challenged my internal status quo, opening my mind to new ideas and opportunities, and together they gave me a basic framework for living, loving, learning and working successfully. If you haven’t read these books yet, I highly recommend doing so. They will enrich your library and your life.

handwriting tips You’ve decided you want to improve your handwriting and you’re probably hoping a fountain pen will do the trick -- maybe a friend told you it would. Maybe you’re just adventurous and you want to try your hand at calligraphy (or you might, once your handwriting improves). Good for you! A fountain pen may make your writing look a bit better, but if your writing looks as if frenzied chickens got loose on the page, chances are this won’t be enough.

24 Books You’ve Probably Never Heard Of But Will Change Your Life Here’s the problem with reading the books that everyone else has read. It makes you more like everyone else. Checking off the various books from your high school curriculum, and then, perhaps the “100 Greatest Books Ever Written” is the educational equivalent of skating to where the puck is and not where it’s going. Reading is about insight into the human experience, about understanding.

It's Time to Read! - Book reviews and news Thank you for all the comments on this page! This is a collection of books mentioned or read on Gilmore Girls! Some of them might have been films instead of the books themselves but I see no problem in reading them either! Here is the list of books (taken from THIS forum and your comments- thanks!). I have removed the travel and cooking booking. I have marked the ones I have read or started and not finished:

My hero: Mary Shelley by Neil Gaiman The cold, wet summer of 1816, a night of ghost stories and a challenge allowed a young woman to delineate the darkness, and give us a way of looking at the world. They were in a villa on the shores of Lake Geneva: Lord Byron – the bestselling poet, too dangerous for the drawing rooms of England and in exile; his doctor, John William Polidori; Percy Shelley, poet and atheist, and his soon-to-be wife, 18-year-old Mary Shelley. Ghost stories were read, and then Byron challenged everyone in the group to come up with a new story.

The Strange Stories Behind Famous Writers' Pen Names How authors came up with pseudonyms like Dr. Seuss, O. Henry, and more Wikimedia Commons Pen names speckle literary history and our modern bookshelves. 7th Grader mimics Nature 13 year old copies Nature to Improve Solar Performance Thirteen year old Aidan Dwyer was walking in the woods in Upstate New York in the winter and noticed a spiral pattern to tree branches. Aidan realized the tree branches and leaves had a mathematical spiral pattern that could be shown as a fraction. After some research he also realized the mathematical fractions were the same numbers as the Fibonacci sequence. 17 of the Most Literary Science Fiction Novels By now we all acknowledge that science fiction isn’t pulpy wish-fulfillment for nerds and literary novels aren’t pretentious bore-fests for academics. Well, I mean, they are that, sometimes. But they can also be so much more.

50 Amazing and Essential Novels to Enrich Your Library Post written by Leo Babauta. I recently ran into a couple of reading lists (I’ll share them at the end) and realized that I LOVE reading book recommendations. I can’t get enough of them. So I decided to compile my own (somewhat eclectic) list of novels I think are amazing and essential to every library. Top 10 first lines in children's and teen books The boy and the old man arrived at the port at night. That's the first line in my debut novel, Close to the Wind, and I'm rather proud of it. The line doesn't shout out at you, but it does a lot of work establishing the tone of the book and giving you the setting and characters without any fuss. It's always difficult to know how to begin a book. Originally, I had a much bolder first line but during an editorial meeting it was suggested I lose it and start with the second line in.