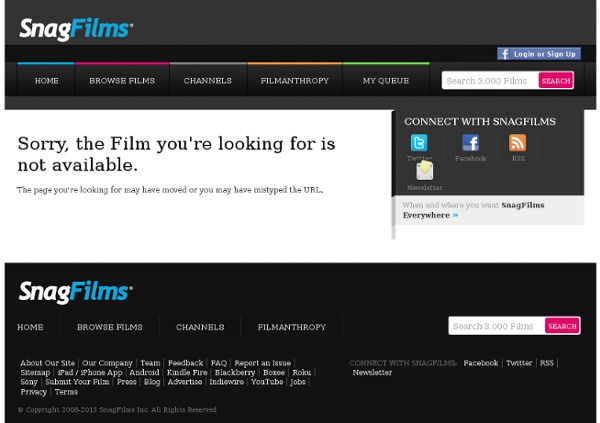 Best World War 2 Documentaries Thanks to the valiant efforts of television producers the world over (and a few dubious cable channels), you don't have to learn about the past through books. Instead, you can sit back, relax and have your history accompanied by genuine footage from the time. This is my list of the best World War 2 documentaries you can buy: some great series haven’t been released. 1. World at War: The Complete Set The World at War is quite simply the best documentary ever made.

Hydroponics in soda bottles (Kidsgardening) Read at : kidsgardening Floating Gardens and Soda Bottles Sixth Graders Build Better Bottles fulldocumentary.com - First to purchase will own this one of a kind asset 1,538 Customers shopping on HugeDomains right now! 73% of all domains registered on the Web are .coms. The reason is simple: .com is the where most of Web traffic happens. Owning a premium .com gives you great benefits including better SEO, name recognition, and providing your site with a sense of authority.

The Cost of a Coke Coca Cola, we've found out, has actually been cooperating with paramilitaries in Colombia to execute workers in their own bottling plants that are trying to form unions and trying to demand better working conditions. So we've been able to bring this to the attention of Universities and say 'if Coca Cola doesn't stop doing this and if Coca Cola doesn't adopt different practices, then our University is no longer willing to have anything to do with Coca Cola. In the world of the Coca-Cola Company, whenever there's a union there's always a bust, whenever there's corruption there's always the real thing, yeah!! Justice Productions second release, The Cost of a Coke: 2nd Edition is the updated version to Matt Beard's first documentary, The Cost of a Coke. The Cost of a Coke: 2nd Edition explores the corruption and moral bankruptcy of the world's most popular soda, and what you can do to help end a gruesome cycle of murders and environmental degradation.

Microbial Life - Educational Resources Teaching and learning about the diversity, ecology and evolution of the microbial world; discover the connections between microbial life, the history of the earth and our dependence on micro-organisms. The expansive Sunset Lake of the Black Sand Basin is one of the largest thermal bodies of water in Yellowstone National Park. Details Watch Confessions of an Undercover Cop Documentary Online Free The inside story of Mark Kennedy, the police officer who spent eight years undercover as a dedicated activist, having infiltrated the environmental movement and Europe’s left-wing extremist political groups. Now, with his cover blown, Kennedy has lost his wife and children, and the friends he made during his time with the protesters have labelled him a traitor. In this Cutting Edge film, he discusses the consequences of his actions, as police bosses claim he has forgotten who he really is. With exclusive access to Mark Kennedy, Britain’s most controversial undercover police officer, this gripping and revelatory documentary tells the definitive, inside story of Mark Stone/Kennedy. Directed by Bafta Award-winner Brian Hill and narrated by Kennedy, the Cutting Edge film also features interviews with the police to reconstruct the story of how Mark Kennedy went from being a regular south London police officer, with a wife and two children, to becoming Mark Stone.

Top 10 Universities With Free Courses Online #1 UC Berkeley Ranked as the #1 public school in the United States, Berkeley offers podcasts and webcasts of amazing professors lecturing. Each course has an RSS feed so you can track each new lecture. For printable assignments and notes you can check the professors homepage, which is usually given in the first lecture or google his name. Even though the notes, homework and tests are not directly printed in the berkeley website, as they are in MIT and other courseware sites, it's not a problem to find them. I personally tried to use it for John Wawrzynek's machine structures class and the nutrition courses.

End of Liberty End of Liberty exposes from a real life perspective how the U.S. is headed for a complete societal collapse. All Americans are now experiencing countless warning signs on a daily basis that a societal collapse is near. Unfortunately, most Americans don't understand the significance of these warning signs. Each warning sign by itself doesn't appear to have a lot of meaning, but together these warning signs present a very detailed picture of the current state of the U.S. economy and where this country is soon headed. The documentary is over an hour long and features Gerald Celente, the most accurate trends forecaster in U.S. history. End of Liberty also features the National Inflation Association's president Gerard Adams, who on February 5th purchased call options in the silver ETF at $0.89 (NIA publicly announced his purchase to NIA members on February 8th) that he sold last week at $4.25 for a gain of 378% in a little over eight months.

LEAKED NORTH KOREAN DOCUMENTARY ‘EXPOSES WESTERN PROPAGANDA’ (AND IT’S SCARY HOW TRUE IT IS) Sabine is a YouTube user who, during a visit to family living in South Korea in April of this year, was given a DVD by a man and a woman claiming to be North Korean “defectors”, and was asked to translate the film so it could be posted on the internet and reach a wider audience. What the DVD turned out to be was something much more than Sabine, or anyone else, probably would’ve imagined, and something that certainly has found a widespread audience on the internet over the last month or so – it was a film called “PROPAGANDA”, a documentary about capitalism, imperialism, mass manipulation of western culture for the purpose of commodification, and how it permeates every aspect of the lives of blissfully ignorant, borderline zombie masses. And jesus, is it on the fucking money. From the video’s description - North Korea in the 1980s

Top 10 Shocking Documentaries Movies and TV As a visual medium, documentaries frequently succeed in portraying the unimaginable far better then any book alone could do. Beaming everything from the consequences of child abuse to the horrors of nuclear warfare into the homes of millions, the following infamous documentaries shock the viewer and challenge perceptions. Please note: Almost all the videos featured contain graphic and disturbing content, relevant to the topic at hand. Warning: some of these documentaries contain disturbing footage. From E-Learning to We-Learning The corporate training industry is undergoing some major changes. Over last few months we have been involved in many discussions with organizations about the tremendous needs to build, manage, and formalize their social and collaborative learning programs. This is being driven by many factors: the slowing economy, the "always-connected" nature of the workforce, and the explosion of social software tools and platforms now available.

Assange: Facebook, Google, Yahoo are Spying Tools In Julian Assange’s exclusive interview with RT he discusses everything from the uprisings in MENA, to his extradition fight, the Guantanamo and US Cable files, his relationship with The Guardian and The New York Times, global political youth movements, the current state of mainstream media and Bradley Manning. He famously warns that social media and in particularly Facebook, Google, Yahoo are among the greatest spy machines ever invented. Once again Mr. Assange demonstrates his intelligence, authenticity and consciousness.

How Virtual Reality Meets Real Life Learning With Mobile Games Participatory games let students see archival footage of events that happened in the places where they stand. (Rosenfeld Media/Flickr) The buzz around games and learning has mostly focused on how educators can learn from game structure to create engaging learning experiences. Or else, educators are experimenting with video games meant to help students practice academic skills. Less attention has been paid to a niche of mobile gaming seeking to bridge the gap between the screen and the real world — pervasive gaming.