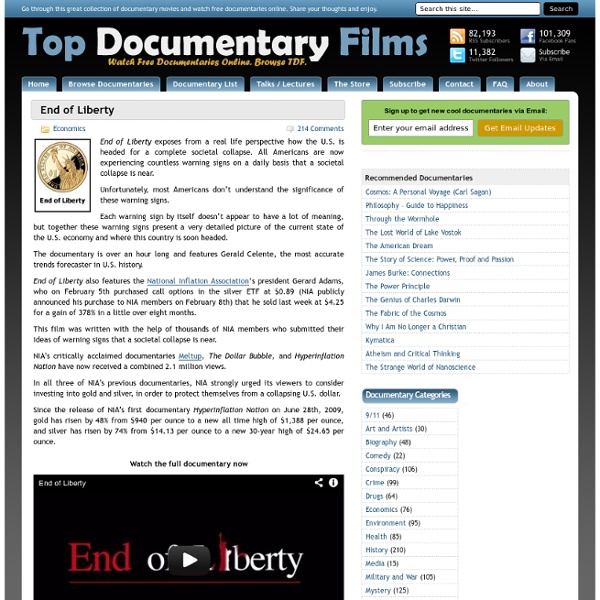 End of Liberty exposes from a real life perspective how the U.S. is headed for a complete societal collapse. All Americans are now experiencing countless warning signs on a daily basis that a societal collapse is near. Unfortunately, most Americans don't understand the significance of these warning signs. Each warning sign by itself doesn't appear to have a lot of meaning, but together these warning signs present a very detailed picture of the current state of the U.S. economy and where this country is soon headed. The documentary is over an hour long and features Gerald Celente, the most accurate trends forecaster in U.S. history. End of Liberty also features the National Inflation Association's president Gerard Adams, who on February 5th purchased call options in the silver ETF at $0.89 (NIA publicly announced his purchase to NIA members on February 8th) that he sold last week at $4.25 for a gain of 378% in a little over eight months. Watch the full documentary now Related:  Most Interesting Documentaries

Overdose: The Next Financial Crisis When the world's financial bubble blew, the solution was to lower interest rates and pump trillions of dollars into the sick banking system. The solution is the problem, that's why we had a problem in the first place. For Economics Nobel laureate Vernon Smith, the Catch 22 is self-evident. But interest rates have been at rock bottom for years, and governments are running out of fuel to feed the economy. The governments can save the banks, but who can save the governments? The storm that would rock the world, began brewing in the US when congress pushed the idea of home ownership for all, propping up those who couldn't make the down payments. The years of growth had been a continuous party. Have you taken out a mortgage, invested capital or bought shares? Watch the full documentary now

Watch Documentaries Online The Cost of a Coke Coca Cola, we've found out, has actually been cooperating with paramilitaries in Colombia to execute workers in their own bottling plants that are trying to form unions and trying to demand better working conditions. So we've been able to bring this to the attention of Universities and say 'if Coca Cola doesn't stop doing this and if Coca Cola doesn't adopt different practices, then our University is no longer willing to have anything to do with Coca Cola. In the world of the Coca-Cola Company, whenever there's a union there's always a bust, whenever there's corruption there's always the real thing, yeah!! Justice Productions second release, The Cost of a Coke: 2nd Edition is the updated version to Matt Beard's first documentary, The Cost of a Coke. The Cost of a Coke: 2nd Edition explores the corruption and moral bankruptcy of the world's most popular soda, and what you can do to help end a gruesome cycle of murders and environmental degradation. Watch the full documentary now

The Secret of Oz In 1996, in a documentary called The Money Masters, we asked the question why is America going broke. It wasn’t clear then that we were, but it is today. Now the question is how can we get out of this mess. Foreclosures are everywhere, unemployment is skyrocketing – and this is only the beginning. America’s economy is on a long, slippery slope from here on. The bubble ride of debt has come to an end. What can government do? Though most people don’t realize it the government can’t just issue it’s own money anymore. The economy of the U.S. is in a deflationary spiral. 1. 2. 3. 4. Watch the full documentary now Best World War 2 Documentaries Thanks to the valiant efforts of television producers the world over (and a few dubious cable channels), you don't have to learn about the past through books. Instead, you can sit back, relax and have your history accompanied by genuine footage from the time. This is my list of the best World War 2 documentaries you can buy: some great series haven’t been released. 1. World at War: The Complete Set The World at War is quite simply the best documentary ever made. 2. I've not been able to see many of these documentaries so far, but they come highly recommended by a reader (which is how I first learnt of them) who says they are excellent. 3. The attraction of this DVD is simple: it's WWII in colour. 4. The single greatest propaganda film ever made, Leni Riefenstahl's account of the 1934 Nuremberg Rally is a masterpiece which partly forged the seductive and powerful image of Nazism. 5. 6. 7. 8. 9. 10. Do you like tanks?

Jaman: Your Home for Movies Online Documentary List - The best documentaries to watch online The Viking Warriors The Vikings (from Old Norse víkingr) were seafaring north Germanic people who raided, traded, explored, and settled in wide areas of Europe, Asia, and the North Atlantic islands from the late 8th to the mid-11th centuries. The Vikings employed wooden longships with wide, shallow-draft hulls, allowing navigation in rough seas or in shallow river waters. The ships could be landed on beaches, and their light weight enabled them to be hauled over portages. These versatile ships allowed the Vikings to travel as far east as Constantinople and the Volga River in Russia, as far west as Iceland, Greenland, and Newfoundland, and as far south as Nekor. Watch Free Documentaries Online - DocumentaryWIRE

Top 10 Shocking Documentaries Movies and TV As a visual medium, documentaries frequently succeed in portraying the unimaginable far better then any book alone could do. Beaming everything from the consequences of child abuse to the horrors of nuclear warfare into the homes of millions, the following infamous documentaries shock the viewer and challenge perceptions. Please note: Almost all the videos featured contain graphic and disturbing content, relevant to the topic at hand. High on Crack Street Following the struggle of three crack addicts, ‘High on Crack Street’ digs deep into the complex daily lives of individuals striving to obtain their next fix. Aokigahara / Suicide Forest Lying at the base of Mount Fuji, Aokigahara Forest has a rather unsettling reputation as a suicide hotspot . Vicious, ruthless, remorseless, brutal, fearless, violent, disturbed and callous are just some of the words which can be used to describe serial contract killer Richard “The Iceman” Kuklinski. Nuit et Brouillard The Killing of America