Attack of the cute 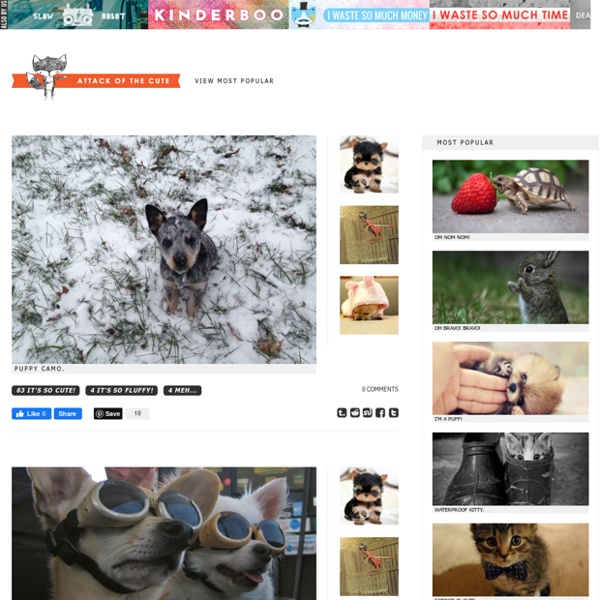 47 Mind-Blowing Psychology-Proven Facts You Should Know About Yourself I’ve decided to start a series called 100 Things You Should Know about People. As in: 100 things you should know if you are going to design an effective and persuasive website, web application or software application. Or maybe just 100 things that everyone should know about humans! The order that I’ll present these 100 things is going to be pretty random. So the fact that this first one is first doesn’t mean that’s it’s the most important.. just that it came to mind first. Dr. 8 Great Apps for Married Couples Technology. Love it, or hate it … or both. It can enhance and improve life. It can also be a distraction. More and more apps are available that can improve your relationship/marriage by helping you connect (or stay connected) better with your spouse. So why not harness the power of technology for your marriage?

Printables Printable Mini Super Stars by Alix Sorrell I recently returned from a trip to India where beautiful paper stars (leftover from Christmas) were hanging everywhere! Depression Infographic - Treatment Effectiveness vs Popularity Depression (11,742 members) StatsSurveyDiscussInfographic This infographic is based on a total of 30,359 treatment effectiveness ratings. Read the blog post for this infographic or Take the survey yourself Notes x-axis = fraction of respondents who tried a given treatment y-axis = average rated effectiveness of a given treatment vertical blue line = average fraction of respondents who tried each treatment horizontal blue line = average rated effectivenss of all treatments 17 Multi-Player iOS Games To Kill Boredom Do you like to play games on your iOS device in your free time, or maybe in your not-so-free time? I’m sure we’re all guilty of playing a game or two when we should be doing other things, like paying attention in class or working. I know I am, anyway.

tokyobikeuk.tumblr.com tokyobike x Ace Hotel London - East London bike tour Earlier in the year, we were lucky enough to host a workshop on the ancient Japanese art of Kintsugi. This short film captured some of the people and the craft involved. Spin London 2014 was bigger and better than ever. A big thank you to everyone who came to see us. Blog Archive » 6 Surprisingly Effective Treatments for Depression Click here for the live-updated, interactive version of this infographic, with all the dots labeled. This is how it happened. When my amazing CureTogether co-founder Daniel Reda flipped his screen around to show me this infographic, my excitement at how beautiful it looked was quickly replaced by my curiosity for what it showed. I knew exercise, sleep, and therapy were popular and effective treatments for depression. But a few things surprised me.

Cult Movies - Top 10 List - Top Ten List - Top 10 Films About Nonconformists - Nonconformity Quotes - Nonconformist Quotes - Nonconformists in Film - Barfly Top 10 Films About Nonconformists "This is a world where everybody's gotta do something. Ya know, somebody laid down this rule that everybody's gotta do something, they gotta be something. You know, a dentist, a glider pilot, a narc, a janitor, a preacher, all that . . . Sometimes I just get tired of thinking of all the things that I don't wanna do. All the things that I don't wanna be. From Kant to Hegel and From Hegel to Marx - the Great Leap Immanuel Kant, born the second son of a leather worker in Konigsberg, Germany, in 1724, is regarded as the father of classical German philosophy. He is mostly remembered for his most important work, Critique of Pure Reason, published in 1788, in which he analyses the work of earlier philosophers such as Descartes, Spinoza, Leibnitz and Hume. His compatriot Hegel was born in 1770, and his most important work was The Science of Logic, published in 1812. There is a vitally important connection between these two great works, a historical process which was begun by the first and continued by the second, a historical process not in the physical sense, but in the mental sense, the history of human thought.

tombucher Tom Bücher © My Wall Publication A-separatist ..First Meme "Ever"? I've always been fascinated by the idea of Internet Memes.. a small inside joke, an embarrassing video, or even a random lolcat that spreads through the internet like fire in a haystack.. And it's even more interesting to know the source of these memes that can trace to prehistoric ages (the 80's mainly), and how they still find their way into the present day.. A couple of days ago, I came across a meme that, apparently, is the oldest meme known to man kind.. No, not the middle finger (though it can be traced to the first cave man's fight with his neighbor), but it's a small audio inside joke that has been passing around for years.. and by years, I mean "since-the-50's" years.. That is really something..

Style LA is a city of big dreams, but also some small homes. This gallery of some of our smallest homes from Los Angeles readers is brimming with inspiration and creativity. Filled with art, light, and carefully collected treasures, these homes are a testament that size does not inhibit style. You're in for a treat. Impostor syndrome The impostor syndrome, sometimes called impostor phenomenon or fraud syndrome, is a psychological phenomenon in which people are unable to internalize their accomplishments. Despite external evidence of their competence, those with the syndrome remain convinced that they are frauds and do not deserve the success they have achieved. Proof of success is dismissed as luck, timing, or as a result of deceiving others into thinking they are more intelligent and competent than they believe themselves to be. Background[edit] The term "impostor syndrome" first appeared in an article written by Pauline R.

9 Sites That Find People and Their 'Sensitive' Information At one time or another, you might need to get the goods on a stranger, like a prospective nanny or a business contact. Public records and people-finder sites are often the place to look; we list the best ones here. These sites use cool, Web 2.0 techniques to help you locate people, then (if need be) dig deep to find the "sensitive" intel about them you need.