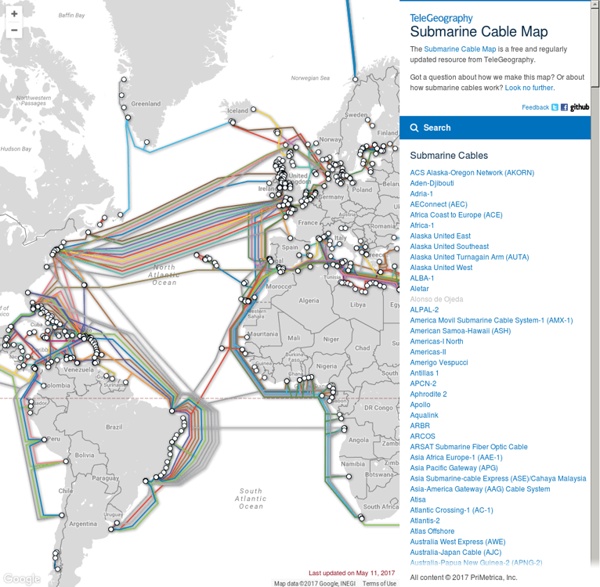 How Browsers Work: Behind the scenes of modern web browsers - HTML5 Rocks Web browsers are the most widely used software. In this primer, I will explain how they work behind the scenes. We will see what happens when you type google.com in the address bar until you see the Google page on the browser screen. Working out the Left-right-left combination to a lock Conventionally, a combination lock is opened by turning the dial two turns to the right, then to the first number, one turn left, and left to the second number, and then right again to the last number. This series of turns causes the rotors of the locks to have their notches aligned with each other (see wooden combination lock model) However, there's nothing that prevents you from starting the combination counterclockwise instead of clockwise, and conventional combination locks can indeed be opened this way.

Living Light Sculpture Reveals Air Quality of Seoul Check out how a retro glass sculpture maps the city’s air quality ! In the center of Seoul ’s Peace Park , which is located across from the Korean World Cup Stadium, lies a very extraordinary sight: an outdoor glass canopy called the Living Light Sculpture. Created by Soo-in Yang and David Benjamin of The Living , and commissioned by the Korean Ministry of Environment, this amazing sculpture is more than just a fantastic piece of art. It actually projects up-to-date information about surrounding cities and their air quality. The glass skin on the sculpture is a map that covers 27 local neighborhoods, and every 15 minutes certain sections light up to tell you which city has the best and worst air quality.

Light and illumination - DIY In this article you will find out why the photographic studios do not use the fluorescent lighting, as well why LEDs have not taken over the world yet, and has it been worth to use them for street lighting. Let's go! Color and spectrum We all know that our eyesight is primitive and ternary: we have three types of color receptors, such as red, blue and green. However, the life is more complicated as usual, and the color is determined by the length of wave / energy of a light quantum. Accordingly, we get into our eyes a light quantum in the middle between red and green, and these types of receptors will react to it in half of force.

Connecting Two PCs Using a USB-USB Cable A very easy way to connect two PCs is to use a USB-USB cable. By connecting two PCs with a cable like this, you can transfer files from one PC to another, and even build a small network and share your Internet connection with a second PC. In this tutorial, we will explain you how to connect two PCs using this type of cable. The first thing you should be aware of is that there are several different kinds of USB-USB cables on the market. The one used to connect two PCs is called “bridged” (or “USB networking cable”), because it has a small electronic circuit in the middle allowing the two PCs to talk to each other.

The Brain Is Not Computable A leading neuroscientist says Kurzweil’s Singularity isn’t going to happen. Instead, humans will assimilate machines. February 18, 2013 Miguel Nicolelis, a top neuroscientist at Duke University, says computers will never replicate the human brain and that the technological Singularity is “a bunch of hot air.” Kill Your Darlings There is nothing like the moment when you suddenly come upon the answer to a design problem. Whether it is a particular interaction or the perfect design element, it is a moment of pure elation. However, in that moment, there is a always a risk of an emotional attachment being formed. Essentially, we have the potential to surrender our ability to see beyond the “perfect solution” we have just created. Arthur Quiller-Couch, a British journalist, critic, and novelist once said,"Murder your darlings." While this quote was aimed at aspiring writers, I believe that it is equally relevant to designers.