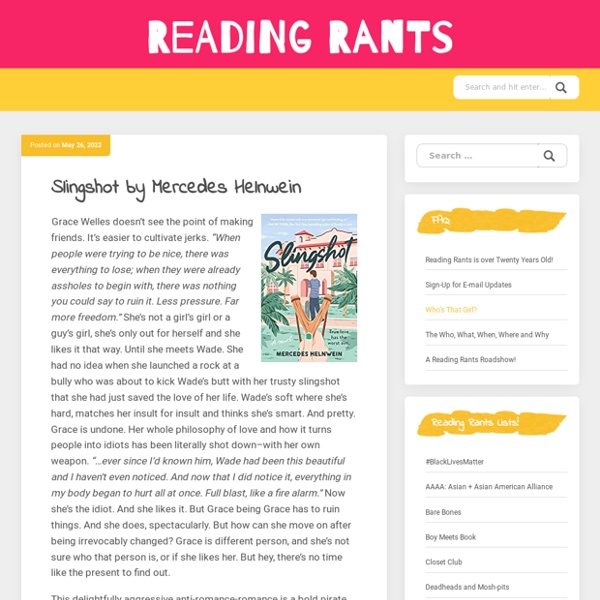 April Publishingpalooza 2014 Holy moly, is there anything more difficult than waiting for a new book to come out?! I don’t think so. So for those of you who hate to wait as much as I do, (especially for THIS ONE TO THE RIGHT) here are some good sites for cyber-stalking your favorite up and coming titles. YALit: Young Adult Book Release Dates 2014 YA Fiction Preview from BookRiot

Blog - Pat Mora Sor Juana Inés de la Cruz was a 17th century nun who devoted her life to writing and learning and words. Though she died in 1695, Sor Juana Inés is still considered one of the most brilliant writers in Mexico’s history: her poetry is recited by schoolchildren throughout Mexico and is studied at schools and universities around the world. Original cover Best Young Adult Books For Grown-Ups In honor of National Support Teen Literature Day, we've collected the best books to pick up if you're in the mood for a little young adult lit. YA has only gotten more popular in the seven years since The Hunger Games came out in 2008. Blockbuster adaptations of stand-alone novels and series like The Fault in Our Stars, The Maze Runner, and Divergent have made YA familiar even to those who haven't picked up a book written for teens since they were a teen themselves. But just because the box office is dominated by dystopian landscapes and John Green doesn't mean that's all YA has to offer. Recent titles destined to become classics represent all sub-genres. There's everything from historical fiction to magical realism and literary fiction.

Fantasy novels dominated children's reading in 2013 From The Hobbit to the Hunger Games and Harry Potter, the list of books that the UK's children loved the most last year is almost entirely stuffed with fantasy novels. Early findings from the biggest annual survey of UK children's reading habits were released today, showing a marked preference for dragons, magic and dystopia over novels set in the real world. According to the What Kids Are Reading report, the most-loved books of last year were JK Rowling's tales of a magical schoolboy, Harry Potter and the Order of the Phoenix and Harry Potter and the Goblet of Fire, which came in joint first place in the list, together with Suzanne Collins's Catching Fire, the second book in the dystopian Hunger Games trilogy. The only non-fantasy title to make the list of most-loved books was John Green's The Fault in Our Stars, about a terminally-ill teenage cancer patient who falls in love. "It is wonderful what reading highly-motivating books does for children.

YALSA's Book Awards and Booklists Looking for great teen books? Look no further than YALSA's Book Awards and Selected Booklists. While these books have been selected for teens from 12 to 18 years of age, the award-winning titles and the titles on YALSA's selected lists span a broad range of reading and maturity levels. We encourage adults to take an active role in helping individual teens choose those books that are the best fit for them and their families. Book Awards Learn more about the Alex Awards, Edwards Award, Morris Award, Odyssey Award, Nonfiction Award, and Printz Award and read speeches from winners Ready, Set, Action! Great Adventure Fiction - Louisville Free Public Library The Final Hour By Klavan, Andrew 2011-07 - Thomas Nelson Publishers 1595547150 Check Our Catalog The Homelanders are attacking-and it's Charlie's last chance to stop them. Charlie West was an ordinary high school kid who went to bed one night and woke up in the clutches of terrorists and wanted by the police for murder. He also woke up with no memory of the events of the last year. His memory is returning now and has brought the terrible realization that he "knows "when the terrorists are going to strike next. Whatever it takes, Charlie knows he can't give in or give up until they're stopped . . . even when the final hour is ticking away.

Book Reviews, Bestselling Books & Publishing Business News Parts of this site are only available to paying PW subscribers. Subscribers: to set up your digital access click here. To subscribe, click here. PW “All Access” site license members have access to PW’s subscriber-only website content. Coming of Age Online: Social Media in YA Literature Teens today are coming of age in an environment saturated with social media, so it’s no surprise it’s featured prominently in the plots of many young adult novels. When I started noticing a trend of books that explore the impact that social media has on the lives of teens, I decided it would be interesting to compile a list showcasing the various ways that teens’ use of Facebook, Twitter, blogging, and other social media are depicted in young adult literature. Lauren Myracle’s Internet Girls series is inventive in structure and form, but the story of girls chatting online and communicating in a virtual space is also groundbreaking in the way it examines the social lives of teens.

Young Adult Book Reviews Genre: Historical Fiction # of Pages: 293 RAC: Yes Margaretha lives on her father’s estate in Germany and knows she must choose a suitor to marry soon. The ALAN Review The ALAN Review (TAR) is a peer-reviewed (refereed) journal published by the Assembly on Literature for Adolescents of the National Council of Teachers of English (ALAN). It is devoted solely to the field of literature for young adults. It is published three times per academic year (fall, winter, and summer) and is sent to all ALAN members, individual and institutional. Members of ALAN need not be members of NCTE.

Top Tuesday: Top Ten Most Anticipated Releases for the Rest of 2015 It’s pretty early for me to think about new releases coming out this year since many new books are released in the fall. But I do love sharing what new books I’m waiting for and there are quite a few that are published this summer. I love waiting for new releases and as I have three Chapters gift cards to spend, this will be an excellent opportunity to look at books that I would like to pre-order. 19 Young Adult Authors To Follow On Instagram Give your Instagram stream a literary makeover with this definitive list of young adult authors whose accounts you should be following. No seriously, go follow them and thank us later. If you like your InstaGs with a side of snark, then make sure to give these authors’ pics a double tap. Sara Benincasa Dude, she is hilarious and GREAT. (Pun intended.)

CCBC Links Here you will find direct links to lists of annual awards and distinctions. Whenever possible, we have tried to link directly to the official page created by the sponsoring organization. To search by subject, author, title or grade level try the Database of Award-Winning Children's Literature Some of the websites linked to below are best viewed in Explorer. Awards for Children's and YA Literature By State Links to U.S. Readers'-Choice & Other-Criteria Awards, by state CYALR is honored to host this list with permission. The links to sites about children's literature awards by states were originally compiled by Melissa Depper of Colorado's Blue Spruce Young Adult Book Award Committee in January 2000 for PUBYAC, a discussion list for Children's and Young Adult Librarians in Public Libraries. It was not intended to be comprehensive. Melissa updated the list in May 2005.

Young Adult Book Reviews Genre: Fantasy # of Pages: 298 RAC: Yes Rio and her twin, Bay, were born in the underwater town of Atlantia and it is now their chosen time to decide if they wish to stay below or go up to the surface for the rest of their lives. People in the underwater city believe that life above ground is dangerous, labor intensive, and fairly short while residents of Atlantia are believed to have an easy life where most people live a very long time.

The Reading Rants displays its purpose as an “Out of the Ordinary Booklist.” The blog’s author is a middle school librarian in Manhattan, and she publishes several YA book reviews each month. Many of these reviews include links to more information about the book and/or author. It also includes an extensive list of recommendations organized by genre. • Students can email the blogger to request that she read and a review a book that have read. Then, compare her review to their own. • Students can get ideas for books to read according to their interests. • Students can comment on the bloggers reviews and interact with other blog readers. by cheryllr5 Oct 11