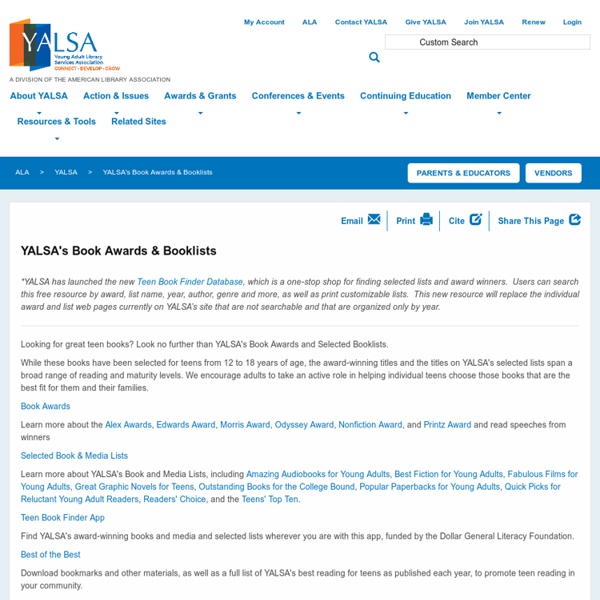 *YALSA has launched the new Teen Book Finder Database, which is a one-stop shop for finding selected lists and award winners. Users can search this free resource by award, list name, year, author, genre and more, as well as print customizable lists. This new resource will replace the individual award and list web pages currently on YALSA’s site that are not searchable and that are organized only by year. Looking for great teen books? Look no further than YALSA's Book Awards and Selected Booklists. While these books have been selected for teens from 12 to 18 years of age, the award-winning titles and the titles on YALSA's selected lists span a broad range of reading and maturity levels. Book Awards Learn more about the Alex Awards, Edwards Award, Morris Award, Odyssey Award, Nonfiction Award, and Printz Award and read speeches from winners Selected Book & Media Lists Teen Book Finder App Best of the Best Selection List Contacts Use and Reproduction of YALSA's Awards and Lists

YALSA's Best of the Best *YALSA has launched the new Teen Book Finder Database, which is a one-stop shop for finding selected lists and award winners. Users can search this free resource by award, list name, year, author, genre and more, as well as print customizable lists. This new resource will replace the individual award and list web pages currently on YALSA’s site that are not searchable and that are organized only by year. Find the best books and media for youth each year through YALSA's Best of the Best!

2014 Notable Children's Books Each year a committee of the Association for Library Service to Children (ALSC) identifies the best of the best in children's books. According to the Notables Criteria, "notable" is defined as: Worthy of note or notice, important, distinguished, outstanding. As applied to children's books, notable should be thought to include books of especially commendable quality, books that exhibit venturesome creativity, and books of fiction, information, poetry and pictures for all age levels (birth through age 14) that reflect and encourage children's interests in exemplary ways. According to ALSC policy, the current year's Newbery, Caldecott, Belpré, Sibert, Geisel, and Batchelder Award and Honor books automatically are added to the Notable Children's Books list.

Female Protagonists in Multicultural Young Adult ... Female Protagonists in Multicultural Young Adult Literature: Sources and Strategies Judith Hayn and Deborah Sherrill In today's classrooms the teaching of multicultural literature featuring female protagonists is vital. The reasons are two-fold: teachers should not only emphasize the commonalties between all people from diverse backgrounds, but also bring females to the forefront of the study of literature because the texts studied have typically featured only males in multicultural settings and/or with differing ethnic roots. Classrooms where the traditional classics dominate seldom give students of diverse backgrounds the opportunity to read about those like themselves. In addition, the American and British literature focus of the standard junior and senior (English III and IV) high school curriculum content rarely offers a female as writer or heroine. The canon may now include works by ethnic writers, but they are most often male such as James Baldwin or Richard Wright.

Dia de los Libros A list of awards and grants that might be of interest to those who celebrate Día in their library and community is compiled below. Américas Award –The Consortium of Latin American Studies founded the Américas Award in 1993 to encourage and commend authors, illustrators and publishers who produce quality children’s and young adult books that portray Latin America, the Caribbean, or Latinos in the United States, and to provide teachers with recommendations for classroom use. CLASP offers up to two annual book awards, together with a commended list of titles. Center for the Study of Multicultural Children’s Literature Día grant – The Center for the Study of Multicultural Children’s Literature awards an annual grant to a library whose Día program has an African American Focus.

Basic search help - Web Search Help Learn a few tips and tricks to help you easily find information on Google. Tip 1: Start with the basics No matter what you're looking for, start with a simple search like where's the closest airport?. You can always add a few descriptive words if necessary. If you're looking for a place or product in a specific location, add the location. For example, bakery seattle. We Need Diverse Books and SLJ Release Booktalking Kit The We Need Diverse Books (WNDB) Booktalking Kit is now available for download. WNDB and School Library Journal (SLJ) have partnered to produce the kit, which is designed to highlight children’s literature about diverse characters and/or written by diverse authors, according to an announcement by WNDB. The kit gives teachers, librarians, and booksellers the tools they need to discuss these works with their students, patrons and customers.

Closing the Diversity Gap in Young Adult Literature From the Harry Potter series to the Hunger Games trilogy, fiction geared to the tween and teen sets can regularly be found at the top of best-seller lists. But no amount of reimagining of Hermione Granger as black can erase the reality that youths of color rarely see themselves represented as the main characters of young adult novels—even though they’re the fastest-growing demographic group in the United States. The diversity of the authors writing young adult literature isn’t much better. In a collaborative effort, the National Education Association Foundation, publishing house Lee & Low Books, and the nonprofit First Book will provide thousands of diverse books to schools and students in low-income communities.

Newbery Medal Home Click here for Newbery Medal and Honor Books, 1922-Present The Newbery Medal was named for eighteenth-century British bookseller John Newbery. It is awarded annually by the Association for Library Service to Children, a division of the American Library Association, to the author of the most distinguished contribution to American literature for children. 2021 Medal Winner An overview of Google Docs - Google Docs Help What are Google Docs, Sheets, and Slides? Google Docs, Sheets, and Slides are productivity apps that let you create different kinds of online documents, work on them in real time with other people, and store them in your Google Drive online — all for free. You can access the documents, spreadsheets, and presentations you create from any computer, anywhere in the world. (There's even some work you can do without an Internet connection!) This guide will give you a quick overview of the many things that you can do with Google Docs, Sheets, and Slides.