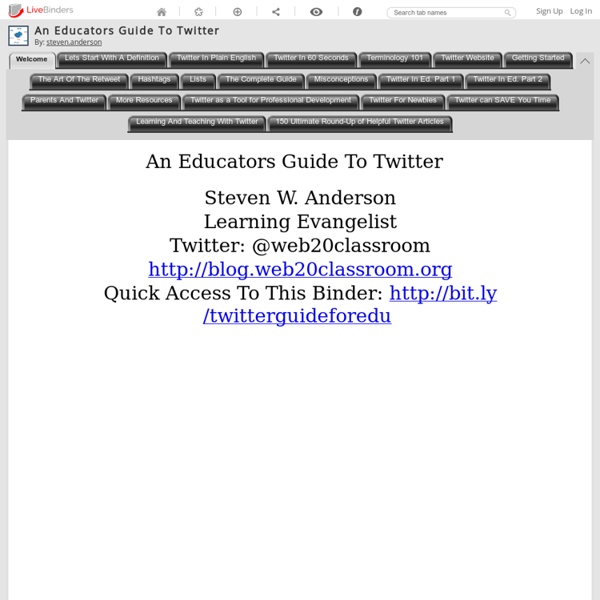 A Beginner's Guide to Twitter Many of ReadWriteWeb’s readers are old hands at Twitter, but the service gets thousands of new users every day. That includes a lot of folks who suddenly need to use Twitter as part of their job. If you’re just being introduced to the joys of Twitter (or introducing it to another user), here’s a short and friendly primer on what you need to know about using the site. After posting “10 Tips on Using Twitter Wisely” in December, I had a few notes from folks who said (basically) “thanks for the tips, but I didn’t know all the jargon.” Digging deeper, I realized that what seems obvious after using Twitter for several years isn’t so obvious to new users. Alphabet Soup Tech folks tend to love acronyms and jargon. Follow If you’re on Twitter you probably get this one already, but let’s cover it for the sake of completeness. Why 140 Characters? Believe it or not, there is a logical reason behind the 140 character limit. Why not 160? How to Tweet You know how to tweet, right? Clients

Forget demographics. It’s all about the socialgraphics By Neicole Crepeau, Contributing {grow} Columnist Traditionally, marketers have researched their customers’ demographics to have a clear idea of their age, gender, income, location, and other traits. Marketers added psychographics to the mix, allowing them to take into account customer’s interests, values, and attitudes. A step up from the very general information that demographics provide, psychographics enable marketers to speak to customers in a way that resonates with them. Socialgraphics capture the attitudes, characteristics, behavior, and, most important, motivations of customers online. Socialgraphics helps move your message The new world of digital marketing requires the kind of research that user experience teams routinely do, but marketers have not always accessed. Demographics and pyschographics may have been enough when marketers were focused simply on online advertising — finding the right keywords to target an audience was enough. Levels of socialgraphics

Twitter_At_A_Glance - IMPROVED! The Ultimate Guide to Mastering Pinterest for Marketing Over the past few months, you may have heard some chatter about a brand new social network called Pinterest. Not surprising. According to Compete, unique visitors to Pinterest.com increased by 429% from September to December 2011, and the social network already boasts a user base of 3.3 million. The short answer? What is Pinterest, and How Does it Work? Pinterest is a social network that allows users to visually share, curate, and discover new interests by posting (AKA 'pinning') images or videos to their own or others' pinboards (i.e. a collection of 'pins,' usually with a common theme) and browsing what other users have pinned. As with most other social networks, users can perform standard social networking functions such as following the boards of their friends, liking and commenting on other users' pins, re-pinning content to their own boards, sharing others' pins on Facebook and Twitter or via email, and even embedding individual pins on their website or blog. Pinterest Etiquette 1.

Tutorials on social media A roundup of guides on how to use blogs, Facebook, Twitter & more Here are tutorials our team has created to help show nonprofits, cause organizations, businesses and individuals how to effectively use social media, divided by subject area. For even more, see the Sharing Center, our posts on resources, tools and video interviews. • Social media • Blogs • Facebook • Twitter • Video & multimedia • Fundraising • Mobile • LinkedIn • Google Plus • Pinterest Social media How to build awareness for your campaign Guest post by Mary Joyce March 2013 Tools & tips: Whether you run a nonprofit, a social enterprise or a cause organization, it’s likely that at some point you run up against the barrier we’ve all faced: How do I get the word out about this amazing campaign? Attracting young people to your nonprofit Guest post by Alison Richmond easyfundraising.co.uk March 2013 How to successfully harness your email list for your cause Guest post by Susannah Vila February 2013 Tutorial: Why measure?

Can You Teach Emotional Intelligence? Behind the Movement for Social and Emotional Learning The Secretary of Education isn’t the only one who thinks so. Behind the growing movement for social and emotional learning. posted Jul 22, 2010 Social and Emotional Learning, SEL, focuses on teaching children the skills and strategies to recognize and moderate their own emotions and to manage conflicts with others. Photo Courtesy of the Jefferson County Kentucky Public Schools. In a dimmed classroom in Spanish Harlem’s P.S. 112, thirteen kindergarteners were on a journey through the Woods of Wonder. “I saw lots of seashells,” whispered one boy. “I saw a reindeer and an owl,” said another. “You fed the owl and he was happy,” said Roepke. “I saw a little bird that was blue and had a flat beak and sharp claws.” “I saw a purple salamander,” Sophie’s neighbor offered. “I’ve been hoping to see one of those!” Soon enough it was time to build a cellophane campfire. “He just spotted it in the woods over there,” Roepke told the class. A Peaceful Place SEL in Action "These are learned skills. Interested?

Favorite Tweets of 2011 I would like to take a moment to thank all of the outstanding educators who are part of my PLN and invest in making me better each and every day. The 10 people who influence me the most and on a daily basis...... I have never met! As this year comes to a close, I wanted to take a moment to share my 5 favorite tweets of 2011 and a brief explanation as to why. Mary Beth Hertz offers some important advice when she tweeted, "Be patient but relentless in helping colleagues build connections!" Tom Whitby shares some meaningful advice in his blog, My Island View, in which he defines What's A Connected Educator? I could not agree more with Nancy and her straightforward tweet about technology integration. Thank you David for sharing this outstanding quote. Wow! "It's about your kids' future, not yours! There is nothing like a tweet that speaks the indisputable truth.