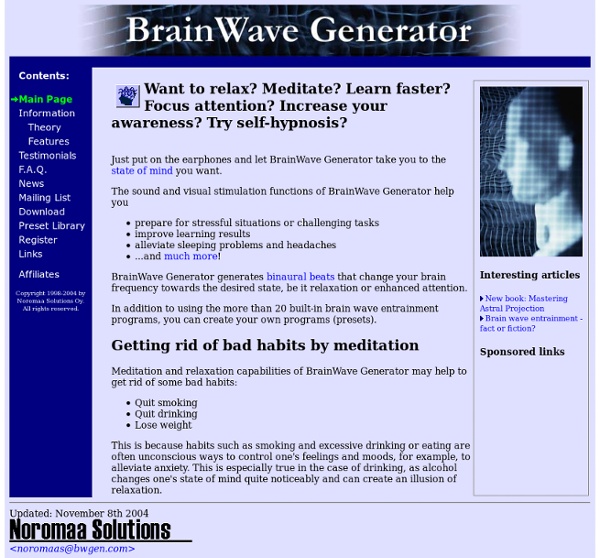 Frequency spectrum Any signal that can be represented as an amplitude that varies with time has a corresponding frequency spectrum. This includes familiar concepts such as visible light (color), musical notes, radio/TV channels, and even the regular rotation of the earth. When these physical phenomena are represented in the form of a frequency spectrum, certain physical descriptions of their internal processes become much simpler. Often, the frequency spectrum clearly shows harmonics, visible as distinct spikes or lines at particular frequencies, that provide insight into the mechanisms that generate the entire signal. Light[edit] Sound[edit]

Vibrational Science Library (Source Materials Studied Before Designing The ASRCR) (Title First For Easy Identification) 1. Mystery of the Seven Vowels, Jocelyn Godwin, Phanes Press, Grand Rapids, MI. 1991 2. “Bioacoustics, Sharry Edwards”, Ohio (lifespirit.org). How Quantum Suicide Works" ­­A man sits down before a gun, which is pointed at his head. This is no ordinary gun; i­t's rigged to a machine that measures the spin of a quantum particle. Each time the trigger is pulled, the spin of the quantum particle -- or quark -- is measured. Depending on the measurement, the gun will either fire, or it won't. If the quantum particle is measured as spinning in a clockwise motion, the gun will fire. If the quark is spinning counterclockwise, the gun won't go off.

how binaural beats induce brainwave entrainment Squareeater uses a combination of binaural beats and psychostrobic flicker effects to attempt to induce brainwave entrainment in the viewer. Binaural beats are achieved by putting a tone in one ear of the listener and a slightly different tone in the other. For example, if the left ear is hearing a sine wave tone of 397hz (cycles per second) and the right is hearing 403hz, the brain perceives a pulse of 6hz, the difference in the frequencies. Under ideal conditions, frequency following response occurs in brainwave functions, meaning the brain starts to function at the same frequency as the binaural stimulus. Different frequencies of stimulus correspond to different brainwave states, for example 4-7hz correspond to theta waves, a brain state associated with deep meditation or early stages of sleep.

Trance Trance denotes any state of awareness or consciousness other than normal waking consciousness. Trance states may occur involuntarily and unbidden. Etymology[edit] Trance in its modern meaning comes from an earlier meaning of "a dazed, half-conscious or insensible condition or state of fear", via the Old French transe "fear of evil", from the Latin transīre "to cross", "pass over". This definition is now obsolete.[1]

John Stuart Reid rexresearch.com Hans JENNY Cymatics Cymatics Cymatics is the study of wave phenomena. It is typically associated with the physical patterns produced through the interaction of sound waves in a medium. A simple experiment demonstrating the visualisation of cymatics can be done by sprinkling sand on a metal plate and vibrating the plate, for example by drawing a violin bow along the edge, the sand will then form itself into standing wave patterns such as simple concentric circles. The higher the frequency, the more complex the shapes produced, with certain shapes having similarities to traditional mandala designs. History of Cymatics The study of the patterns produced by vibrating bodies has a venerable history. John S.

Hyperchaos A hyperchaotic attractor is typically defined as chaotic behavior with at least two positive Lyapunov exponents. Combined with one null exponent along the flow and one negative exponent to ensure the boundness of the solution, the minimal dimension for a (continuous) hyperchaotic system is 4. The first hyperchaotic system Figure 1: Plane projection of the hyperchaotic attractor solution to the 4D Rössler system. Figure 2: First-return map to the Poincaré section of the hyperchaotic attractor solution to the 4D Rössler system. The first 4D flow was proposed in 1979 by Rössler. Star Wars In The Form Of Mexican Traditional Art « Bit Rebels Once again the brainchild of someone else has completely taken me by surprise. No wonder we have something called a viral social media phenomenon. It’s amazing what people come up with and how inspiring it is every time you manage to cross roads with something new and fresh. Even though this art style isn’t exactly new, it is for the Star Wars brand. It’s so fresh as a matter of fact that I haven’t even thought about the connection until I saw these wonderful drawings.

The Science Of Binaural Beat Brainwave Entrainment Technology - for meditation relaxation stress management and achieving altered states of consciousness What are Binaural Beats? The Discovery Of Binaural Beats Altered States Resonant entrainment of oscillating systems How it works on the brain Synchronized brain waves Gamma wave Gamma waves A gamma wave is a pattern of neural oscillation in humans with a frequency between 25 and 100 Hz,[1] though 40 Hz is typical.[2] According to a popular theory, gamma waves may be implicated in creating the unity of conscious perception (the binding problem).[3][4][5] However, there is no agreement on the theory; as a researcher suggests: Whether or not gamma wave activity is related to subjective awareness is a very difficult question which cannot be answered with certainty at the present time.[6] History[edit] Gamma waves were initially ignored before the development of digital electroencephalography as analog electroencephalography is restricted to recording and measuring rhythms that are usually less than 25 Hz.[1] One of the earliest reports on them was in 1964 using recordings of the electrical activity of electrodes implanted in the visual cortex of awake monkeys.[7]

Unisonic Ascension - Beyond Meditation - Solfeggio These Solfeggio meditations are a modern adaptation of the ancient Solfeggio scale. They are combined with Unisonic Ascension’s: Gamma, Alpha, Theta and Delta binaural beat brainwave entrainment, precisely tuned to these Solfeggio frequencies. Composing music in the full ancient Solfeggio scale, as these tracks are, means having to tune each musical note and frequency separately. Great care has been taken to make sure these tunings are 100% accurate. 396 Hz – Releasing emotional patterns. 417 Hz – Breaking up crystallized emotional patterns.

Quantum Entanglement Quantum Entanglement It is possible for a particle to interact with another particle in such a way that the quantum states of the two particles form a single entangled state. The definition of an entangled state is that it is not entirely independent of other states: its state is dependent on another state in some way. Because of this dependency it is a mistake to consider either state in isolation from the other. Rather we should combine the states and treat the result as a single, entangled state.