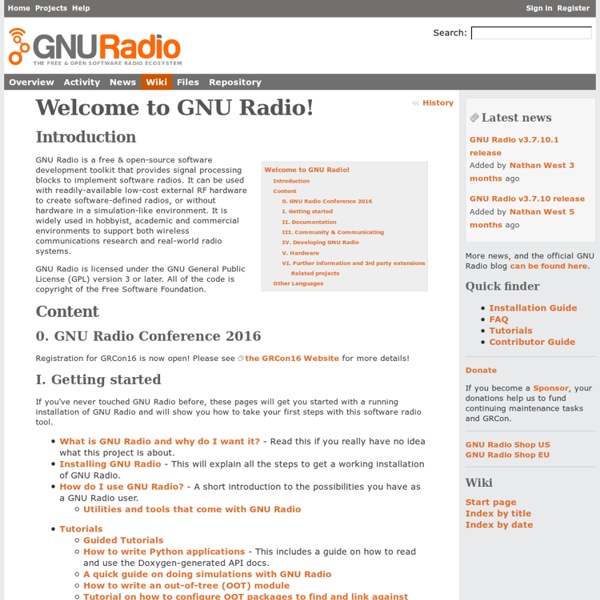 Introduction¶ GNU Radio is a free & open-source software development toolkit that provides signal processing blocks to implement software radios. It can be used with readily-available low-cost external RF hardware to create software-defined radios, or without hardware in a simulation-like environment. It is widely used in hobbyist, academic and commercial environments to support both wireless communications research and real-world radio systems. GNU Radio is licensed under the GNU General Public License (GPL) version 3 or later. Content¶ 0. Registration for GRCon16 is now open! I. If you've never touched GNU Radio before, these pages will get you started with a running installation of GNU Radio and will show you how to take your first steps with this software radio tool. II. GNU Radio has two manuals: one for the C++ API and another for the Python API. The Sphinx documentation fills in some holes in the C++ docs where there is Python-only code: Sphinx-based Documentation III. IV. V. VI.

Josh Knows | Introductory Tour of the GNU Radio Project Before you read too far, I have produced a coding guide: Blocks Coding Guide. Don't overlook it. Introduction I am writing this guide because GNU Radio is a great tool that can easily be overlooked. The documentation is poor and just getting started is not obvious. GNU Radio is a set of signal processing tools for the computer. GNU Radio is... An API for creating signal blocks (C++/Python) A runtime environment for signal processing A library of signal processing blocks User scripts and applications Hardware drivers (USRP/USRP2/VRT) An application for creating flow graphs (GRC) The USRP is big ADC/DAC with a USB plug, with a decent price (under $1k). Buy USRPs Here Installing GNU Radio Installing GNU Radio is probably the biggest leap for a beginner. Windows GNU Radio definitely works in Windows. Follow these instructions Linux Ubuntu Linux is very nice for GNU Radio because all the dependencies can be easily met. Using GNU Radio Introdution Python Helpful Python References Learning By Example

data structures and software dependability | Software / Snoopy latest update: April 14, 2014, at 01:02 PM Please use the following reference to give credits to Snoopy:M Heiner, M Herajy, F Liu, C Rohr and M Schwarick:Snoopy – a unifying Petri net tool;In Proc. PETRI NETS 2012, Hamburg, Springer, LNCS, volume 7347, 398–407, June 2012 News Downloads Windows version snoopy-stable-windows-2014-04-01.msiafter download finished double click on the *.msi and the installation starts start snoopy, e.g. by double click on the icon on your desktop Linux version Mac OS X version (10.5+, Intel only) snoopy-stable-macosx-intel-2014-04-01.dmgopen the dmg and drag snoopy to your favorite location start snoopy, e.g. by double click on the name For our faithful long-term friends, who want to transfer their PED-files, we provide here a ped2snoopy converter, and some useful hints to use it. Here are some examples to get used to the tool: There is no all-covering manual available, but you will hopefully not miss it. General Description Basic Properties Main Features Upcoming

Satellite Tracking System: Orbitron by Sebastian Stoff / Satellite tracking easiest ever! The first artificial satellite was put in the space on October 4, 1957 by the Russians. It was named Sputnik 1, and spent 92 days in Earth orbit. Since then man has launched thousands of rockets, and put thousands of satellites in orbit. There are more than 8000 objects in orbit now, including operational, non-operational, rocket bodies, and debris. They are orbiting at an altitude from 150, up to several thousands kilometers. Due to predictable conditions of satellite movement in space (lack of atmosphere) computer software can calculate a satellite's position for given moment. To keep tracking software working precisely, one should update elements periodically. You must remember that TLE data for an object that has maneuvered since the last elset is no longer any good. Why do we track satellites? So even if you're a beginner, don't hesitate to download satellite tracking software like Orbitron. Remember, satellite tracking is the easiest ever with Orbitron!

Meet Snoopy: The DIY drone that tracks your devices just about anywhere Seven months ago, Ars documented CreepyDOL, a low-cost, distributed network of Wi-Fi sensors that stalks smartphone-toting people as they move about neighborhoods or even entire cities. As each node is small enough to be slipped into an overlooked nook at the nearby gym, cafe, or break room, the system can assemble a shockingly detailed dossier of personal data, including the schedules, e-mail addresses, personal photos, and current or past whereabouts of the person or people it monitors. Now, CreepyDOL—short for Creepy Distributed Object Locator—is about to be outdone by a newly updated DIY stalker device that has the potential to collect orders of magnitude more data from people. Dubbed Snoopy, it can track not only Wi-Fi, but also signals based on radio frequency identification (RFID) and the Bluetooth and 802.15 specifications. Digital terrestrial footprint It was also possible to know if any devices within range of Snoopy had previously visited other monitored locations.

KiCad EDA Software Suite - Kicad EDA - KiCad EDA KiCad is an EDA software suite for the creation of professional schematics and printed circuit boards up to 32 copper layers with additional technical layers. KiCad runs on Windows, Linux and Apple OS X and is released under the open-source GNU GPL v2 free of charge. If you like KiCad or are making a good living using KiCad in your toolset, you should consider donating funds used for development. CERN has put up a place to collect donations which will be used directly to support a developer. With KiCad you can create schematic diagrams and printed circuit board up to 32 copper layers. Eeschema, schematic editor.Pcbnew, printed circuit board editor, with a 3D viewer.Gerbview, Gerber file viewer. And then some other auxiliary tools: Pl_editor, a page layout editor.Bitmap2component, make you convert bitmap images to footprints.PCB calculator, provides some nifty calculators. KiCad is under heavy development. Since its birth, in 2007, KiCad has shown a great level of acceptance among users.

GSoC - GNU Radio - gnuradio.org GSoC is a Google-sponsored event to get students involved in Open Source projects (Website). GNURadio has participated in GSoC 2012 and 2013, and has 5 students accepted for GSoC 2014. Students interested in participating, read the student instructions and the rules of conduct. List of ideas¶ This is the list of project ideas for GSoC 2014 within GNU Radio. All of these projects have mentors, so if you have any questions, feel free to contact them! Students who do not find a fit among these projects are encouraged to engage with us and suggest new ones. Reviewing the Google FAQ page for a broader understanding of project, mentor, and student responsibilities is recommended. If you need a USRP to complete the project, we will be able to arrange something. Signal Processing¶ GSM analysis tool (replacement for airprobe)¶ Airprobe is a tool that was used to analyse GSM signals a while back. Objectives¶ Create an OOT module which decodes GSM signals. Potential mentor(s)¶ Sylvain Munaut Radar toolbox¶

RFID IO tools News October 2012: Migrated source code to I realised one of the reasons I haven't been doing many updates is because it's always such a faff getting a new tarball together, updating the webpage etc., etc. Now, should you be vaguely interested, you can simply watch the project on github and get notified whenever a change is committed... I will follow my usual practice of 'commit early, commit often', so whenever I'm working on something, expect daily updates... September 2011: Added Throwing Star LAN Tap to shop. March 2011: Added ubertooth-one to shop. December 2009 : Beta release 1.0b-beta integrates new version of libnfc wrapper (pynfc ver 0.2), which works with the latest libnfc SVN repo (r245). November 2009: Release 1.0a - Started integrating Nick von Dadelszen's libnfc wrapper so we can support the new generation of usb stick readers which are practically given away with digital cash products such as Snapper. Contents What is RFIDIOt? Hardware