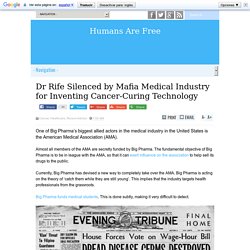 Almost a... One of Big Pharma’s biggest allied actors in the medical industry in the United States is the American Medical Association (AMA). Almost all members of the AMA are secretly funded by Big Pharma. The fundamental objective of Big Pharma is to be in league with the AMA, so that it can exert influence on the association to help sell its drugs to the public. Currently, Big Pharma has devised a new way to completely take over the AMA. Big Pharma funds medical students. Big Pharma has therefore succeeded in creating an atmosphere in which medical students have come to value the industry’s input in patient care, which in turn can lead to patient and societal harm. The pharmaceutical industry and the medical field are inextricably entangled. However, this immoral practice that strangles the healthcare sector didn’t start today. By Amando Flavio, Anonhq.com. 7 Suppressed Inventions That Would Have Changed The World : Waking Times. 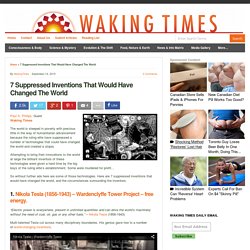 Nikola Tesla (1856-1943) – Wardenclyffe Tower Project – free energy. “Electric power is everywhere, present in unlimited quantities and can drive the world’s machinery without the need of coal, oil, gas or any other fuels.” – Nikola Tesla (1856-1943) Multi-talented Tesla cut across many disciplinary boundaries. His genius gave rise to a number of world-changing inventions. One of his most famous experiments /inventions was the Wardenclyffe Tower Project. However, Tesla’s funding was stopped.

Tesla died a poverty-stricken lonely and forgotten man in New York City. 1. “Electric power is everywhere, present in unlimited quantities and can drive the world’s machinery without the need of coal, oil, gas or any other fuels.” – Nikola Tesla (1856-1943) Multi-talented Tesla cut across many disciplinary boundaries. One of his most famous experiments /inventions was the Wardenclyffe Tower Project. However, Tesla’s funding was stopped. Scalar Energy Healing Cancer - Breakthrough Discovery Shows That Resonant Frequencies Can Kill Cancer Cells.

Anna Hunt, StaffWaking Times An important breakthrough may prevent people from suffering from cancer or the aggressive radiation and chemotherapy treatments used to kill cancer cells. 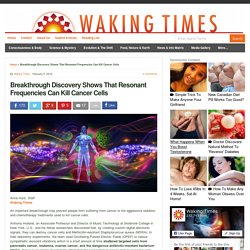 Anthony Holland, an Associate Professor and Director of Music Technology at Skidmore College in New York, U.S., and his fellow researchers discovered that, by creating custom digital electronic signals, they can destroy cancer cells and Methicillin-resistant Staphylococcus aureus (MSRA). In their laboratory experiments, the team used Oscillating Pulsed Electric Fields (OPEF) to induce sympathetic resonant vibrations which in a short amount of time shattered targeted cells from pancreatic cancer, leukemia, ovarian cancer, and the dangerous antibiotic-resistant bacterium MSRA. Below is an image showing the effect that the resonant frequencies had on leukemia cells.

Below is a TED talk by Anthony Holland during which he reveals his discoveries. Rife Machines - Holistic Cancer Research. Gregg Prescott, M.S., In5D GuestWaking Times Please note: Any information presented in this article is for educational research ONLY. 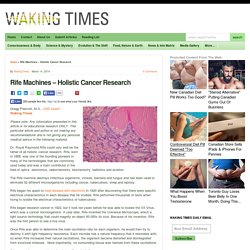 This particular article and author is not making any recommendations and is not giving any personal medical advice in the following material. Dr. Royal Raymond Rife could very well be the father of all holistic cancer research. Rife, born in 1888, was one of the founding pioneers in many of the technologies that are commonly used today and was a main contributor in the field of optics, electronics, radiochemistry, biochemistry, ballistics and aviation. The Rife machine destroys infectious organisms, viruses, bacteria and fungus and has been used to eliminate 52 different microorganisms including cancer, tuberculosis, strep and leprosy.

Rife began his quest to treat disease with electricity in 1920 after discovering that there were specific electrical characteristics in each disease that he studied. Cancer & The Healing Power of Sound. Bill Thompson, Gong Sound HealingWaking Times Note: Following is a fascinating interview with Dr. 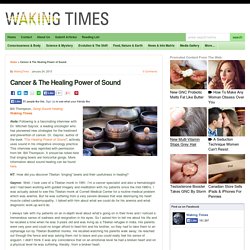 Mitchell Gaynor, a leading oncologist who has pioneered new strategies for the treatment and prevention of cancer. Dr. Gaynor, author of the book “The Healing Power of Sound”, actively uses sound in his integrative oncology practice. This interview was reprinted with permission from Mr. NT: How did you discover Tibetan “singing” bowls and their usefulness in healing? Gaynor: Well, I took care of a Tibetan monk in 1991. I always talk with my patients on an in-depth level about what’s going on in their lives and I noticed a tremendous sense of sadness and resignation in his eyes.

He left the hospital about 2 weeks later and he gave me as a gift a metal Tibetan singing bowl. I started working with the bowls with my patients and the results were phenomenal. Sound can change our immune function. NT: Are the metal singing bowls the ones you usually use? Gaynor: I also use quartz crystal bowls.