Frequency Chart II. NCH Audio Tone Generator. Untitled. The 81 Lo Shu Tones. One of the main contributors to the Lo Shu Tone research goes by the nick of j00lz at abrahadabra.com and he has compiled several graphic charts that demonstrate how the tones can be derived by counting out different 'beats' around the Enneagon: Each subset has a different set of 'polarity reversals' or patterns of smallest/largest leading frequency. 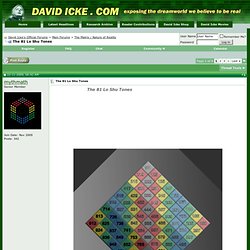 Source Vibrations. Gamma wave. Gamma waves A gamma wave is a pattern of neural oscillation in humans with a frequency between 25 and 100 Hz,[1] though 40 Hz is typical.[2] According to a popular theory, gamma waves may be implicated in creating the unity of conscious perception (the binding problem).[3][4][5] However, there is no agreement on the theory; as a researcher suggests: Whether or not gamma wave activity is related to subjective awareness is a very difficult question which cannot be answered with certainty at the present time.[6] History[edit] Gamma waves were initially ignored before the development of digital electroencephalography as analog electroencephalography is restricted to recording and measuring rhythms that are usually less than 25 Hz.[1] One of the earliest reports on them was in 1964 using recordings of the electrical activity of electrodes implanted in the visual cortex of awake monkeys.[7] Linked to unity of consciousness? 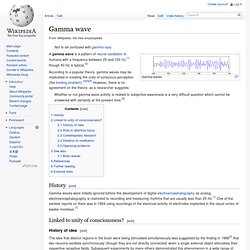 History of idea[edit] A lead article by Andreas K. Gamma: Insight and Consciousness... Or just Microsaccades? : Developing Intelligence. The cognitive neurosciences have had high frequency oscillations on the brain: so called “gamma-waves”, as recorded on the scalp, have been linked to working memory processes (via their interaction with slower “theta waves”), to cognitive insight, and even to consciousness. 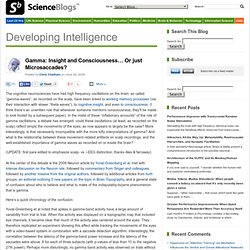 (I think there’s an unwritten rule that whenever someone mentions consciousness, they’ll be made to look foolish by a subsequent paper). Trance. Trance denotes any state of awareness or consciousness other than normal waking consciousness. 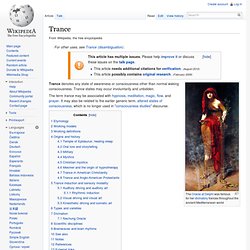 Trance states may occur involuntarily and unbidden. Etymology[edit] Trance in its modern meaning comes from an earlier meaning of "a dazed, half-conscious or insensible condition or state of fear", via the Old French transe "fear of evil", from the Latin transīre "to cross", "pass over". This definition is now obsolete.[1] Working models[edit] Wier, in his 1995 book, Trance: from magic to technology, defines a simple trance (p. 58) as a state of mind being caused by cognitive loops where a cognitive object (thoughts, images, sounds, intentional actions) repeats long enough to result in various sets of disabled cognitive functions. Working definitions[edit] The following are some examples of trance states: Castillo (1995) states that: "Trance phenomena result from the behavior of intense focusing of attention, which is the key psychological mechanism of trance induction. Origins and history[edit] 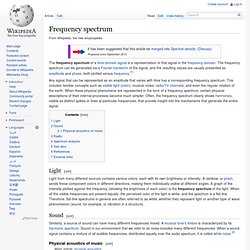 This includes familiar concepts such as visible light (color), musical notes, radio/TV channels, and even the regular rotation of the earth. When these physical phenomena are represented in the form of a frequency spectrum, certain physical descriptions of their internal processes become much simpler. Often, the frequency spectrum clearly shows harmonics, visible as distinct spikes or lines at particular frequencies, that provide insight into the mechanisms that generate the entire signal.