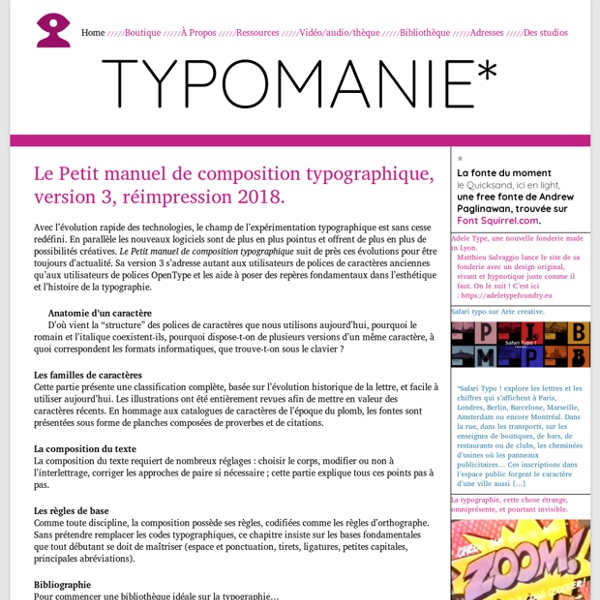 How To Create Outstanding Modern Infographics In this tutorial you will learn that data doesn't have to be boring, it can be beautiful! Learn how to use various graph tools, illustration techniques and typography to make an accurate and inspiring infographic in Adobe Illustrator. Start by using the Rectangle Tool (M) to draw a shape. Franchise Franchise Animated is an animated typeface by 1 type designer and 110 animators. For this specific animated typeface we have round up 110 talented animators from all over the world. We asked every animator to pick a glyph and animate it using no more than 4 colors, 25 frames and a 500 x 600 px canvas in Adobe After Effects. The animators had complete freedom to work their magic within those 25 frames.

History - Peter Bilak Design concept Typotheque’s project History has been in development longer than any other project the foundry has ever undertaken. Its beginnings can be traced to the early 1990s when Peter Biľak experimented with decorative layering systems inspired by 19th century Tuscan types. Years later the project took a new twist when Biľak worked on proposals for the Twin Cities typeface.

Video - Girl Effect Here are three solid reasons why we want you to invest your time, energy and capital in an adolescent girl 1. Girls are agents of change They play a crucial role in solving the most persistent development problems facing the world today. By investing in their economic potential through education and by delaying child marriage and teen pregnancy, issues such as HIV and AIDS can be resolved and the cycle of poverty can be broken. 16 CV "graphiques" (It’s actually up to 18 now.) A number of designers have attempted to design a visual, infographic resume, and while this is certainly not mainstream (yet), it is gaining some momentum. I wanted to highlight some of the great examples available on the web, but the line between an infographic resume and a designer resume is tough not to cross.

Moshun Moshun is an animated typeface created in Adobe After Effects. It was published in the following magazines and blogs; - Motionographer - Design - FastCo Design - The Globe and Mail m jealous of javier piñón i’m jealous of javier piñón Oh boy, I think I have a new crush… yep, I do. Brooklyn based artist Javier Piñón {and his cowboys} had me at howdy. These boys are from three different series: Chairs, Chandeliers, and Floods… and I love them all very, very much.