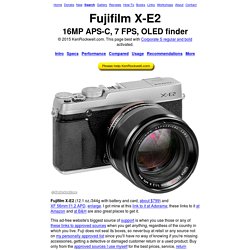 This page best with Corporate S regular and bold activated. Intro Specs Performance Compared Usage Recommendations More Fujifilm X-E2 (12.1 oz./344g with battery and card, about $799) and XF 56mm f/1.2 APD. enlarge. I got mine at this link to it at Adorama; these links to it at Amazon and at B&H are also great places to get it. This ad-free website's biggest source of support is when you use those or any of these links to approved sources when you get anything, regardless of the country in which you live. 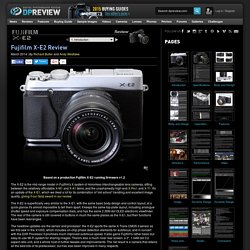 It's an update of the X-E1, which we liked a lot for its combination of 'old school' handling and excellent image quality, giving it our Gold award in our review. The X-E2 is superficially very similar to the X-E1, with the same basic body design and control layout; at a quick glance it's almost impossible to tell them apart. It keeps the same top-plate layout, including analogue shutter speed and exposure compensation dials, and has the same 2.36M dot OLED electronic viewfinder. The rear of the camera is still covered in buttons in much the same places as the X-E1, but their functions have been rearranged. DigiDIRECT Australia. Find out more * Offer valid for a limited time. 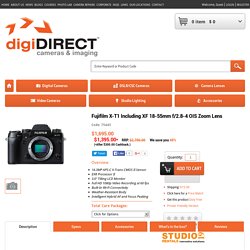 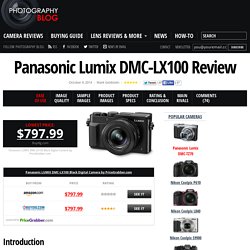 Sony RX100 III Review: The Best Pocket Point-And-Shoot (For A Price) For the last few years, Sony’s RX100 point-and-shoot camera line has been king of the compact mountain. 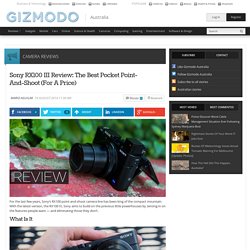 With the latest version, the RX100 III, Sony aims to build on the previous little powerhouses by zeroing in on the features people want — and eliminating those they don’t. Sony RX100 III Review: The Best Pocket Point-And-Shoot (For A Price) Australian Review: Panasonic Lumix G7 - A bit like magic. Performance The G7's big point of difference is its "time-travelling" burst mode, where you're presented with a sequence of 60 images starting from one second before you pulled the trigger to one second after. 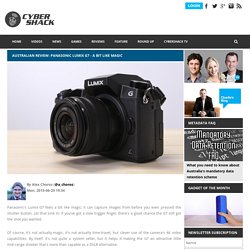 Rather than actually taking 60 photographs, the G7 is actually recording high-resolution 4K video for the two second period, giving you the ability to pick and choose stills after. Of course, this comes with its own compromises; images are only shot at eight megapixels; half the resolution the G7 is capable of. Despite the decrease in size, the photos captured using the G7's 4K photography modes are still surprisingly detailed. You might be out of luck if you want to blow them up to larger sizes, but they're perfect for smaller prints and digital usage. However, as convenient as the functionality is, it's not entirely foolproof. After you're done taking a 4K burst, you're able to select the images you want to keep. Australian Review: Panasonic Lumix LX100 - Retro chic. Performance Coming from a DSLR, the first difference you'll notice performance wise is that the Lumix LX100 takes about two or three seconds to power on. 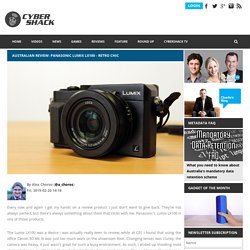 This isn't too inconvenient, but feels a little clunky when compared to many DSLR's instant-on capabilities. Being able to shoot with the aperture as wide as 1.7 gives you nice shallow depth of field, as well as reasonable low light capabilities. In terms of ISO, noise doesn't start to become an issue until above 1600. 2000 can be passable, but I wouldn't want to be shooting at 3200 or higher in most circumstances (although, the grain isn't as noticeable when shooting in low light). The useable ISO range still gives you a lot of flexibility when shooting, just not quite as much as a comparably priced DSLR. Because the sensor is only 12.8 megapixels, you can lose some of the finer details in an image when you blow up an image, especially at maximum zoom, but this certainly isn't a deal breaker. Hands-on: Panasonic Lumix LX100 review. It's finally happened: Panasonic has created a compact camera with a large Micro Four Thirds sensor on board. 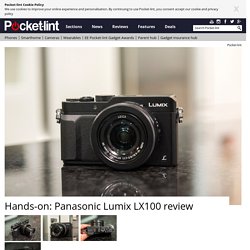 It's called the Panasonic Lumix LX100 and we here at Pocket-lint had hands-on time with the forthcoming camera ahead of its official Photokina announcement. Is it a high-end compact to get more excited about than all the competition? Because, let's face it, the competition has rapidly advanced in the high-end compact camera sector in recent years. Fujifilm and Sony have considerable products ranging from the Fujifilm X20 and Sony Cyber-shot RX100 III, through to the pricier Fujifilm X100S.

Panasonic has largely been leaning on its ageing Lumix LX7 for a few years now and, as much as we think the LX7 is a great little camera for a number of reasons, it's the larger sensor that now seems to be the biggest lure in the compact camera world. Canon Powershot G7 X: Screen and Features. Canon PowerShot G7 X: Screen The Canon PowerShot G7 X has a 3-inch display of 1040k dots – a reasonable resolution sitting between the 921k-dot Panasonic Lumix LX100 and the 1229k-dot Sony RX100 III. 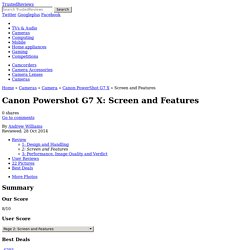 It’s a good display, and needs to be, because there’s no viewfinder built into the camera. Both the Panasonic and Sony rivals use one – but both are significantly more expensive. Best compact cameras 2014: 21 we recommend. There are hundreds of digital compact cameras on the market, with advanced, superzoom and rugged camera options all being available, which makes finding the right one quite tricky. 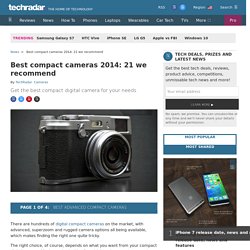 The right choice, of course, depends on what you want from your compact digital camera. Maybe you're looking for a high-end compact camera to take the place of your SLR, or perhaps you want something more basic to get a few snaps on vacation. Whichever type you are looking for, we've pulled together a selection of what we believe are the best compact cameras on the market now.

Not to mention the hundreds (if not thousands) of legacy lenses you could adapt. Need more speed? Utilize the Speedbooster adapters and gain a full stop of light. I’ve already reviewed the sharpest lenses for Micro 4/3, the best lenses under $500, as well as portrait lenses. For a preview, take a look at the table of contents, and feel free to jump to your section of choice: Table of Contents. Panasonic Lumix LX100. What is the Panasonic Lumix LX100? The Panasonic Lumix LX100 might be considered a natural evolution of the Sony RX100 series.

This, too, is a small compact that offers performance comparable with a compact system camera. Panasonic has moved the genre on by packing an even larger Micro Four Thirds sensor into a slightly larger body that offers much better manual control than on any camera of this large-sensor-in-small-body class. At £699, it may seem expensive for what initially appears to be a normal compact camera. But rarely do you see small solutions like this that are so geared towards the real enthusiast. Panasonic Lumix DMC-GM5 review. What is the Panasonic Lumix DMC-GM5? The Panasonic Lumix DMC-GM5 is a second go at a formula established last year with the DMC-GM1: an absolutely tiny camera body that offers a fairly large Micro Four Thirds sensor and interchangeable lenses. Starting at £699 with a kit lens, Panasonic hasn’t dumbed down the features to meet a lower price in this second attempt.

Instead, the Lumix GM5 adds an EVF and bulks up the body a bit to try and address the main criticism of the GM1 – that it's just too fiddly. For all its efforts, the DMC-GM5 is still pretty cramped, and awkward at times, but if a slim and light frame is at the top of your list, this is about as petite as compact system cameras with large sensors get. Sony Cyber-shot DSC-RX100 review. It's one thing to be fashionably late to the party, but it's another altogether to be just plain late. The RX100 is Sony's first large-sensor compact camera, and while it definitely falls in the latter camp, it comes bearing many gifts that make up for the wait. Design and features Quite aptly given its raison d'être, the RX100 is small, fitting comfortably in your hand or pocket. It feels particularly well made and sturdy, thanks to its aluminium frame, though its exterior is rather slippery.

This means that you will most definitely need to attach the included wrist strap to ensure that it doesn't fall out of your grip. Buttons are on the small side, which adds a nice, refined feel to the shooting experience, but some users might find them a little too small for comfort. The 3-inch LCD screen is quite something to behold. Panasonic Lumix DMC-LX100 Digital Camera (Silver) DMC-LX100S B&H. The silver Panasonic Lumix DMC-LX100 Digital Camera is an advanced Four Thirds format point-and-shoot with manual controls designed to enable and inspire creativity. It features a large multi-aspect 4/3" type MOS sensor to produce 12.8MP still images (4:3) and 4K Ultra HD video at 30 and 24 fps. You also have the ability to extract high-resolution 8MP images from the 4K video, letting you capture entire scenes without missing a shot. The built-in Leica DC Vario-Summilux zoom lens provides a 35mm-equivalent focal length range of 24-75mm, covering wide-angle to portrait-length perspectives.

With a fast maximum aperture of f/1.7-2.8, the lens lets you work in lower light situations and provides selective focus control for shallow depth of field imagery, enhanced by a nine-bladed aperture for smooth out-of-focus rendering. When more light is needed, the camera features an integrated hot shoe, letting you use external flash units. Fuji X Buyer’s Guide. I have been a Fuji fan boy since the original X100 and, as you can see from the photo above, I have continued to drink the Fuji juice.

Whether you're looking for the best DSLR, best compact system camera or even the best compact camera, our best camera round-up has a camera for you. Our list of the best cameras in 2015 is split into broad categories to make it easier for you to narrow down your choice, but each one includes cameras of different sizes and price. In our most recent update, we've removed two cameras and added two new ones.

10 best compact cameras of 2015. Canon EOS M Body Only + EF Lens Adapter > Canon Compact System Cameras - Ted's Cameras. Perfect for budding photographers who want to step up from their compact camera, but don’t want to get bogged down with complicated DSLR modes and functions, the EOS M combines DSLR quality with easy-to-use functionality. PowerShot S120 Canon Australia. Canon PowerShot S120 (Black) - Kogan.com. Canon S120 review. Canon generally releases its S range of premium compact cameras at the same time as it updates the G series, and it's no different this year with the introduction of the Canon PowerShot S120 to replace last year's Canon PowerShot S110.

As with its bigger sibling, much of the outward design of the S120 remains unchanged from its predecessor, but internally there have been some significant upgrades. It is the first S series camera to feature a lens with an f/1.8 aperture. Its diminutive dimensions also make it the slimmest camera in the world to feature an f/1.8 optic. It's still a 5x optical zoom, starting at 24mm. It also shares the same new 12.1 million pixel back-illuminated CMOS sensor as the Canon G16. Spot - Test du Nex-5 par Cédric Chassagne.