The Dawning Virtual Age. Editor’s note: Sasa Marinkovic is the head of software marketing for the computing and graphics group at AMD. 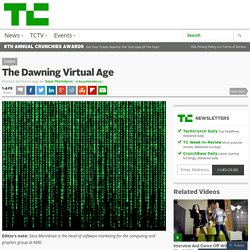 We all experienced a colorless world not too long ago — a colorless computing world. The arrival of graphics processing for personal computers 30 years ago banished monochrome and grayscale displays and triggered a revolution in computer-graphics-enabled applications, gaming and entertainment. This revolution continues today thanks to the tremendous advancements in computer processing power, graphics, video and display technologies. Those advancements are fundamentally transforming personal computing and catapulting users into an ultra-realistic realm of visual possibilities that only sci-fi writers imagined two or three decades ago. Television and PC image quality has steadily improved to today’s incredibly detailed, vivid, and lifelike Retina and Gorilla Glass and high-resolution 4K displays.

Virtual Reality: Beyond the Headset. The World Cracks Down on the Internet. In September of last year, Chinese authorities announced an unorthodox standard to help them decide whether to punish people for posting online comments that are false, defamatory, or otherwise harmful: Was a message popular enough to attract five hundred reposts or five thousand views? 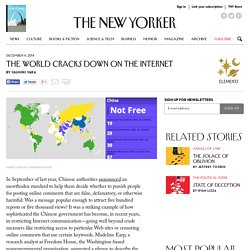 It was a striking example of how sophisticated the Chinese government has become, in recent years, in restricting Internet communication—going well beyond crude measures like restricting access to particular Web sites or censoring online comments that use certain keywords. Legal Pot in the US Is Crippling Mexican Cartels. Marijuana has accounted for nearly half of all total drug arrests in the US for the past 20 years, according to the FBI’s crime statistics. 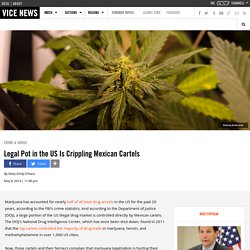 And according to the Department of Justice (DOJ), a large portion of the US illegal drug market is controlled directly by Mexican cartels. Inside the ‘DarkMarket’ Prototype, a Silk Road the FBI Can Never Seize. LSD, Reconsidered for Therapy. Photo. That Six-Serving Bar of Marijuana Chocolate? My Son Ate It. Legal Marijuana Businesses Should Have Access to Banks, Holder Says. Photo Attorney General said Thursday that lawful marijuana businesses should have access to the American banking system and that the government would soon offer rules to help them gain it. 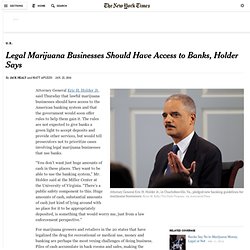 The rules are not expected to give banks a green light to accept deposits and provide other services, but would tell prosecutors not to prioritize cases involving legal marijuana businesses that use banks. TEDification versus Edification. Essay: Simon Sadler Top left: Buckminster Fuller. 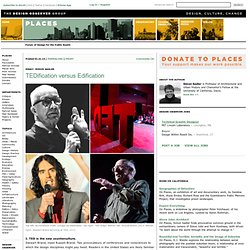 [Image via Wikimedia]. Graham Hancock Tries Changa. Obama Says Marijuana Is Less Dangerous Than Alcohol. Outrageous HSBC Settlement Proves the Drug War is a Joke. Active ingredient in pot sets off a feedback that reduces intoxication. As far as marijuana is concerned, most of the attention has recently focused on the start of commercial sales of the drug. 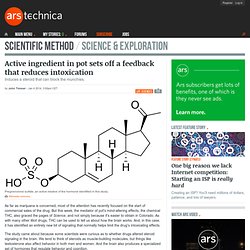 But this week, the mediator of pot's mind-altering effects, the chemical THC, also graced the pages of Science, and not simply because it's easier to obtain in Colorado. As with many other illicit drugs, THC can be used to tell us about how the brain works. And, in this case, it has identified an entirely new bit of signaling that normally helps limit the drug's intoxicating effects.

The study came about because some scientists were curious as to whether drugs altered steroid signaling in the brain. We tend to think of steroids as muscle-building molecules, but things like testosterone also affect behavior in both men and women. So, to find out whether drug use altered the brain's steroid signaling, a large international team of researchers started feeding a variety of drugs to mice and rats: cocaine, morphine, nicotine, alcohol—and THC. 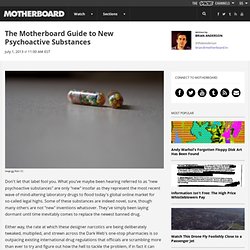 Few Problems With Cannabis for California. But at a time when polls show widening public support for legalization — recreational marijuana is about to become legal in Colorado and Washington, and voter initiatives are in the pipeline in at least three other states — California’s 17-year experience as the first state to legalize medical marijuana offers surprising lessons, experts say. 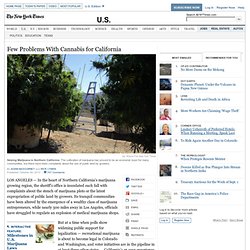 Warnings voiced against partial legalization — of civic disorder, increased lawlessness and a drastic rise in other drug use — have proved unfounded. Instead, research suggests both that marijuana has become an alcohol substitute for younger people here and in other states that have legalized medical marijuana, and that while driving under the influence of any intoxicant is dangerous, driving after smoking marijuana is less dangerous than after drinking alcohol. Although marijuana is legal here only for medical use, it is widely available. What We Can All Learn from G-Cloud and the Singapore Government. Dr. Sanjay Gupta: Why I changed my mind on weed. Dr. 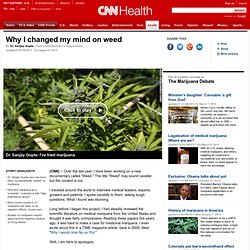 Sanjay Gupta says we have been "systematically misled" on marijuanaDEA lists marijuana as a schedule 1 substance with "high potential for abuse"Most recent research on marijuana has been on its negative effects, Gupta saysStudies on marijuana require approval from National Institute on Drug Abuse (CNN) -- Over the last year, I have been working on a new documentary called "Weed. " The title "Weed" may sound cavalier, but the content is not. I traveled around the world to interview medical leaders, experts, growers and patients. I spoke candidly to them, asking tough questions. Long before I began this project, I had steadily reviewed the scientific literature on medical marijuana from the United States and thought it was fairly unimpressive. Well, I am here to apologize. I apologize because I didn't look hard enough, until now.