The Hidden Dangers of Benzodiazepines. Foundations Recovery Network, one of the nation’s leading organizations for treating a dual diagnosis of substance addiction and mental health disorders, recently put together an infographic on the risks associated with benzodiazepine abuse. 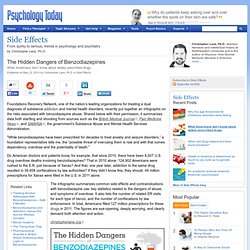 Shared below with their permission, it summarizes data both startling and shocking from sources such as the British Medical Journal, Pain Medicine News, and SAMHSA, the government’s Substance Abuse and Mental Health Services Administration. "While benzodiazepines have been prescribed for decades to treat anxiety and seizure disorders,” a foundation representative tells me, the “possible threat of overusing them is real and with that comes dependency, overdose and the potentiality of death.”

Do American doctors and patients know, for example, that since 2010, there have been 6,507 U.S. drug overdose deaths involving benzodiazepines? That in 2010 alone, 124,902 Americans were rushed to the E.R. just because of Xanax? Can Cannabis Cause Psychosis? A Hard Question to Answer. Cannabis, commonly known as marijuana and also by many other names, is one of the most popular recreational drugs in the world. 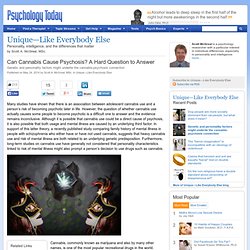 Although many people try it without apparent ill effects, a large amount of evidence exists that individuals who engage in heavy cannabis use before the age of 18 have an increased risk of developing a psychotic mental disorder later in life (McLaren, Silins, Hutchinson, Mattick, & Hall, 2010). Testing whether or not cannabis use actually causes people to become psychotic is difficult to do, because the only truly conclusive way to do so would involve performing an experiment in which a bunch of people were randomly picked to become either users or non-users for a long period of time, and assessing their mental health status before and after.

Due to ethical constraints this is not possible (especially in the current climate of political correctness) so researchers have had to make do with alternative study methods. Oreos May Be As Addictive As Cocaine. If you have ever found yourself unable to resist just one more Oreo, you’re not alone. 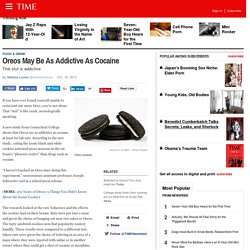 That “stuf” is like crack, neurologically speaking. A new study from Connecticut College shows that Oreos are as addictive as cocaine, at least for lab rats. According to the new study, eating the iconic black and white cookies activated more neurons in the rat brain’s “pleasure center” than drugs such as cocaine. “I haven’t touched an Oreo since doing this experiment,” neuroscience assistant professor Joseph Schroeder said in a school press release.

(MORE: 100 Years of Oreos: 9 Things You Didn’t Know About the Iconic Cookie) The research looked at the rats’ behaviors and the effects the cookies had on their brains. The rats in the study liked the cookies about as much as they liked the drugs, congregating near the cookie side of the maze as much as they would on the drug side. Much like humans, rats also prefer the delicious creamy center to the cookie. A Full List of ADHD Medications - Health and Life. This is a full list of medications that are currently used for treating ADHD. 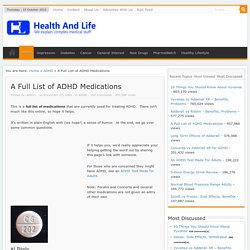 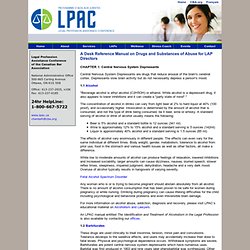 Depressants slow brain activity but do not necessarily depress a person's mood. 1.1 Alcohol "Beverage alcohol is ethyl alcohol (C2H5OH) or ethanol. While alcohol is a depressant drug, it also appears to lower inhibitions and it can create a "party state of mind". " The concentration of alcohol in drinks can vary from light beer at 2% to hard liquor at 40% (100 proof), and occasionally higher. Beer is 5% alcohol and a standard bottle is 12 ounces (341 ml) Wine is approximately 12% to 15% alcohol and a standard serving is 5 ounces (142ml) Liquor is approximately 40% alcohol and a standard serving is 1.5 ounces (85 ml) The effects of alcohol vary enormously in different people.

Fetal Alcohol Spectrum Disorder. 'Bath Salt' Drugs May Be More Addictive Than Meth. "Bath salts," the recently popular stimulant drugs made with synthetic chemicals, may be more addictive than methamphetamine, one of the most addictive drugs of abuse, a new study on rats suggests. 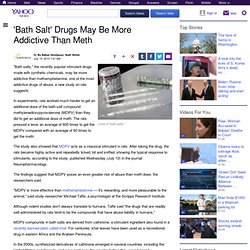 The findings suggest that MDPV poses an even greater risk of abuse than meth does, the researchers said. How Gambling Can Kill You Faster Than Drug Abuse or Alcoholism. September 13, 2012 | Like this article? 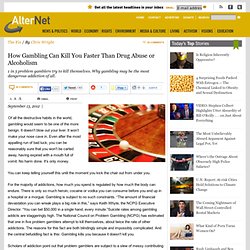 Join our email list: Stay up to date with the latest headlines via email.