Can ‘magic’ mushrooms help terminally ill patients? - News on Heart.org. By AMERICAN HEART ASSOCIATION NEWS Psilocybin, the active ingredient in hallucinogenic “magic” mushrooms, is playing a mystical role for terminally ill patients by helping them come to terms with unresolved problems, emotions and even their imminent death, according to those who have worked with such individuals. 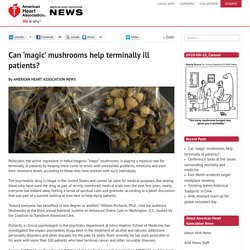 The psychedelic drug is illegal in the United States and cannot be used for medical purposes. But among those who have used the drug as part of strictly monitored medical trials over the past few years, nearly everyone has walked away feeling a sense of spiritual calm and gratitude, according to a panel discussion that was part of a summit looking at how best to help dying patients. “Almost everyone has benefited in one degree or another,” William Richards, Ph.D., told the audience Wednesday at the third annual National Summit on Advanced Illness Care in Washington, D.C., hosted by the Coalition to Transform Advanced Care. Viral photo shows face of heroin America needs to see. In posting the photo to Facebook, the East Liverpool Police in Ohio performed a service: It showed the hideous face of a crisis in American culture. 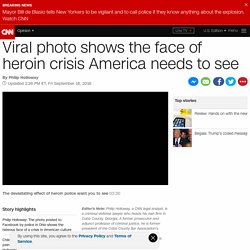 Public reaction has ranged from shock and outrage at the adults pictured, to anger at the police for the public shaming of these people who are supposed to be caring for a small child. Many I've heard from think it's bad that the police department who put this child's picture on display for the world to see. From my perspective as a practicing lawyer, police advisor, and parent, I don't agree that releasing such a picture is a mistake. Heroin addiction is a slow-rolling disaster in America. Heroin overdose deaths nearly quadrupled across the U.S. between 2002 and 2013. Jay Z: 'The War on Drugs Is an Epic Fail' - Video. Campaign To Control Club Drug Ketamine Could Curb Its Role As An Effective Anesthetic : Goats and Soda. 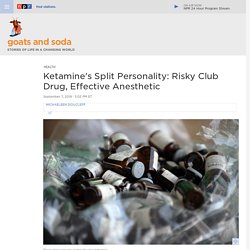 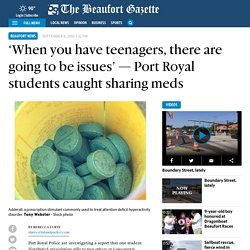 Chief Alan Beach said the department heard from the Port Royal charter school’s director, Amy Horn, on Aug. 25 about an anonymous caller who told Horn an unknown 10th-grader may try to sell the stimulant Adderall at the school the next day. CDC to Doctors: Cool It With the Painkiller Prescriptions. Adderall ADHD drug misuse rising among young adults. The stimulant Adderall, widely prescribed for attention deficit-hyperactivity disorder (ADHD), is the drug of choice misused by students and young professionals who believe they need it to focus while studying all night for an exam or to help them learn faster. 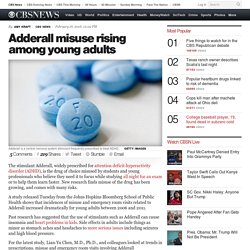 New research finds misuse of the drug has been growing, and comes with many risks. A study released Tuesday from the Johns Hopkins Bloomberg School of Public Health shows that incidences of misuse and emergency room visits related to Adderall increased dramatically for young adults between 2006 and 2011. Past research has suggested that the use of stimulants such as Adderall can cause insomnia and heart problems in kids. Side effects in adults include things as minor as stomach aches and headaches to more serious issues including seizures and high blood pressure.

Artist Creates Psychedelic Illustrations While On 20 Different Drugs. At some point, I think we’ve all wondered how drugs would change our perception of the world around us. 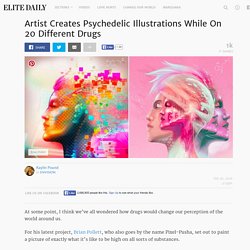 For his latest project, Brian Pollett, who also goes by the name Pixel-Pusha, set out to paint a picture of exactly what it’s like to be high on all sorts of substances. Literally. That’s right. Fatal Overdoses of Common Anxiety Meds Are Spiking. More Than 47,000 Americans Died of Drug Overdoses in 2014, Setting Record. More than 47,000 Americans died from drug overdoses in 2014, setting a new record, according to the Centers for Disease Control and Prevention (CDC). 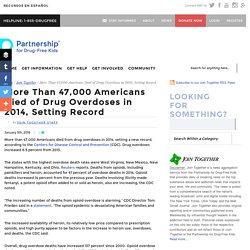 Drug overdoses increased 6.5 percent from 2013. The states with the highest overdose death rates were West Virginia, New Mexico, New Hampshire, Kentucky, and Ohio, Reuters reports. Deaths from opioids, including painkillers and heroin, accounted for 61 percent of overdose deaths in 2014. Opioid deaths increased 14 percent from the previous year. High cocaine doses 'can cause brain to eat itself' High doses of cocaine can cause the brain to eat itself, research suggests. 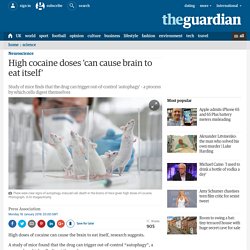 A study of mice found that the drug can trigger out-of-control “autophagy”, a process by which cells digest themselves. I raised an addict – what could I have done differently? It has been a very interesting month. 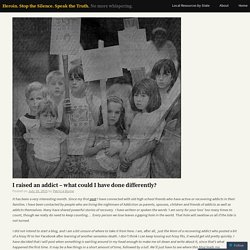 Since my first post I have connected with old high school friends who have active or recovering addicts in their families. I have been contacted by people who are living the nightmare of Addiction as parents, spouses, children and friends of addicts as well as addicts themselves. Many have shared powerful stories of recovery. 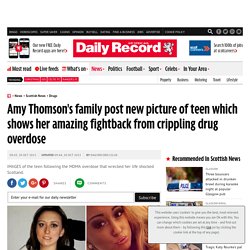 Images of the teen following the MDMA overdose that wrecked her life shocked Scotland. But a picture posted to the Support For Amy Facebook page shows her fighting back. The 16-year-old was left fighting for her life after taking MDMA at a friend’s house in Glasgow in June. She spent weeks in a coma and her brain and body were ravaged by the drug. Father in La. murder-suicide slit his wife and kids' throats. A twisted father slit his wife and two children's throats on Sunday morning, before he died of a drug overdose in a murder-suicide. David Mata, 46, killed his family and then took his own life in a suspected drug overdose, the Jefferson Parish coroner's office said.

The dad turned the knife on himself several times, cutting his wrist, forearms and throat, but did not die from the wounds, Dr. Gerry Cvitanovich said. In a horrific display arranged by the father, the two boys, 2-year-old Liam and 4-year-old Caden were found in their beds, with covers pulled up to their necks and children's toys and dolls surrounding them. Facebook. Scott Weiland died after cardiac arrest, coke found in room. Rock star Scott Weiland died of cardiac arrest as his bandmate was busted for cocaine possession, according to reports. The 48-year-old former Stone Temple Pilots frontman wasn’t breathing and appeared to have suffered from cardiac arrest when he was found unresponsive on his tour bus Thursday evening, a dispatcher said in an emergency dispatch call.

TMZ obtained a recording of the exchange between Minnesota’s Bloomington Police Department and the Hennepin County Sheriff’s Department. Retna Ltd. Documentary Out Now. Amend the RAVE Act! Complete Set of All 4 Testing Kits. All four testing kits in one convenient and cheaper package! Includes 1 each of the Mandelin, Mecke, Marquis, and Folin Reagents (4 kits / 5 bottles total). Each bottle contains enough reagent for approximately 50 tests. This kit contains everything below. Who Controls You? Upload abovetheinfluence.com Above the Influence Loading... Working... ► Play all.

The New York City Medical Examiner has found that Dr. L.I. doctor died of severe use of booze, cocaine. Family Structure Influences Whether Letting Teens Drink at Home Leads to Problems. A teen’s family structure influences whether allowing them to drink at home leads to alcohol problems later on, a new study suggests. Teens living with both biological parents who were allowed to drink at home had the lowest levels of alcohol use and problems later on.

Those living with either a single parent or in a blended family (such as a biological parent and a stepparent) who were allowed to drink at home had the highest levels of alcohol use and problems, according to The Boston Globe. The study appears in the Journal of Studies on Alcohol and Drugs. It included 772 children ages 12 to 17, along with their parents. Oregon and the normalization of marijuana legalization. Oregon recently became the third state to legalize the sale of recreational marijuana. Crack-cocaine and opiates 'found in Lamar Odom's system' These Shameless Cocaine Ads Prove the '70s Were a Hell of a Time to Be Alive. Survey Data Highlight The Tenuous Relationship Between Drug Panics And Reality. INEBRI-NATION by Les Baker V - Exposure. Cocaine. Cocaine is a powerfully addictive stimulant drug made from the leaves of the coca plant native to South America.