Ashley Hurley Teaches about @voxer in Education PLN's. Social Media Activities for Libraries. Introduction I'm often asked 'What can we use social media tools for within the library? 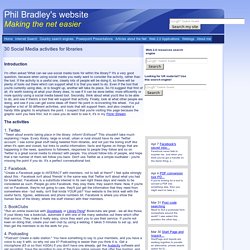 ' It's a very good question, because when using social media you really want to consider the activity, rather than the tool. If the activity is a useful one, clearly lots of people will be doing it, so there will be plenty of tools out there which can support what it is that you want to do. Even if the tool that you're currently using dies, or is bought up, another will take its place. 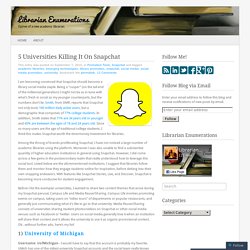 Being a “cusper” (on the tail end of the millennial generation) I might not be as in-tune with what’s fresh in social as my younger counterparts, but the numbers don’t lie. Smith, from DMR, reports that Snapchat not only touts 100 million daily active users, but a demographic that comprises of 77% college students. In addition, Smith states that 71% are 34 years old or younger and 45% are between the ages of 18 and 24 years old. Since so many users are the age of traditional college students, I think this makes Snapchat worth the time/money investment for libraries. Among the throng of brands proliferating Snapchat, I have not noticed a large number of academic libraries using the platform. Before I list the exemplar universities, I wanted to share two content themes that arose during my Snapchat perusal, Campus Life and Media Reuse/Sharing. 1) University of Michigan. We’ve Reddit, have you? What librarians can learn from a site full of memes Reddit dubs itself “the front page of the Internet,” and it often lives up to this claim; if something has gone viral on the Web, its rise to popularity is very likely due to it being linked to on Reddit.com and then subsequently spreading like wildfire from there. 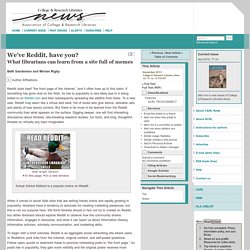 To a new user, Reddit may seem like a virtual wild west, full of ducks who give advice, adorable cats, and plenty of less savory content. But there is far more to be learned from the Reddit community than what appears on the surface. Digging deeper, one will find interesting discussions about libraries, late-breaking research studies, fun facts, and long, thoughtful threads on virtually any topic imaginable. Actual Advice Mallard is a popular meme on Reddit. When it comes to social Web sites that are setting trends online and rapidly growing in popularity, librarians have a tendency to advocate for creating marketing presences, but this is not our purpose here.