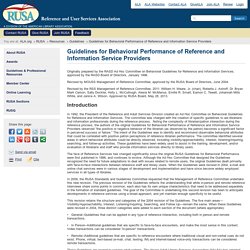 Revised by MOUSS Management of Reference Committee; approved by the RUSA Board of Directors, June 2004. Revised by the RSS Management of Reference Committee, 2011: William H. Weare, Jr. (chair), Roberta J. Astroff, Dr. Introduction. $8 million dollar rare book collection donated to the State Library of Victoria. State Library Vic sur Twitter : "Today we received one of the world's great rare book collections. When Google is your librarian and Starbucks your WiFi, do we still need public libraries? (bigstock) BiblioTech: Why Libraries Matter More Than Ever in the Age of Google By John Palfrey Basic Books. 280 pp. $26.99 Libraries are repositories of books, music and documents, but above all of nostalgia: the musty stacks, the unexpected finds, the safety and pleasure of a place that welcomes and shelters unconditionally. 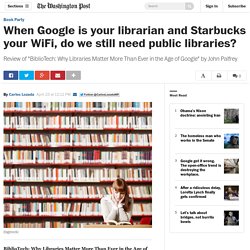 John Palfrey shares these memories, but he is also wary of them. Palfrey, the former head of the Harvard Law School Library and the founding chairman of the Digital Public Library of America, wants a library revolution, one that remakes the institution’s technology, goals and training. You don’t really have to believe that the fate of the republic hangs in the balance to recognize that libraries are facing unique challenges wrought by changing technology and consumer habits. But when Google is America’s reference librarian and Starbucks its WiFi, what role for your local library?

(Basic Books) But Palfrey is somewhat vague about how to get there. I tried to use the Internet to do historical research. It was nearly impossible. By Gareth MillwardFebruary 17 Gareth Millward is a research fellow at the Centre for History in Public Health at the London School of Hygiene and Tropical Medicine. 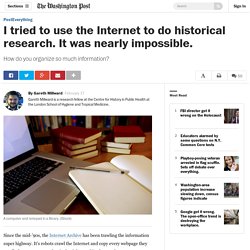 A computer and notepad in a library. (iStock) Since the mid-’90s, the Internet Archive has been trawling the information super highway. It’s robots crawl the Internet and copy every webpage they can find, every two months. It’s a rich and fantastic resource for historians of the near-past. History relies on evidence. Until very recently, this was just a curiosity, a theoretical possibility. I was part of a research project organized by the British Library and Institute of Historical Research.

Very. Let’s take my own research as an example. If I put “RNIB” into the British Library’s prototype search engine, I get half a million results, spread across three decades. Creating and Using File Plans. Knowledge infrastructures: intellectual frameworks and research challenges. The Knowledge Infrastructures research group convened a workshop in May 2012, sponsored by the U.S. 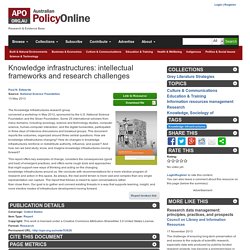 National Science Foundation and the Sloan Foundation. Some 25 international scholars from many domains, including sociology, science and technology studies, computer science, human-computer interaction, and the digital humanities, participated in three days of intensive discussions and breakout groups. This document reports the outcomes, organized around three central questions: How are knowledge infrastructures changing? How a New Dutch Library Smashed Attendance Records. Facing declining visitors and uncertainty about what to do about it, library administrators in the new town of Almere in the Netherlands did something extraordinary. 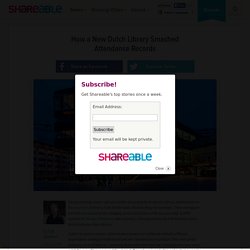 They redesigned their libraries based on the changing needs and desires of library users and, in 2010, opened the Nieuwe Bibliotheek (New Library), a thriving community hub that looks more like a bookstore than a library. Guided by patron surveys, administrators tossed out traditional methods of library organization, turning to retail design and merchandising for inspiration. They now group books by areas of interest, combining fiction and nonfiction; they display books face-out to catch the eye of browsers; and they train staff members in marketing and customer service techniques. The library is also a Seats2meet (S2M) location where patrons are empowered to help one another in exchange for free, permanent, coworking space, and they utilize the S2M Serendipity Machine to connect library users in real-time. Thousands of early English books released online to public by Bodleian Libraries and partners.

27 January 2015 More than 25,000 early English texts from 1473-1700 have been released online to members of the public as part of a collaborative initiative led by the University of Oxford's Bodleian Libraries and the University of Michigan Library. 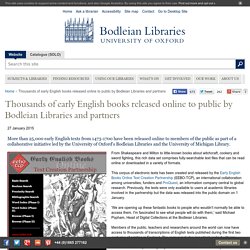 From Shakespeare and Milton to little-known books about witchcraft, cookery and sword fighting, this rich data set comprises fully-searchable text files that can be read online or downloaded in a variety of formats. This corpus of electronic texts has been created and released by the Early English Books Online Text Creation Partnership (EEBO-TCP), an international collaboration among universities, funders and ProQuest, an information company central to global research. Previously, the texts were only available to users at academic libraries involved in the partnership but the data was released into the public domain on 1 January. 'We are opening up these fantastic books to people who wouldn't normally be able to access them.