Acervo do Conhecimento Histórico. Lost, Forgotten Books and Ancient Sacred Texts. Although not considered canon, these ancient texts are part of the heritage of Judaism and Christianity. 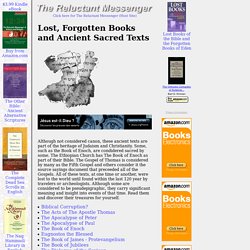 Some, such as the Book of Enoch, are condidered sacred by some. The Ethiopian Church has The Book of Enoch as part of their Bible. The Gospel of Thomas is considered by many as the Fifth Gospel and others consider it the source sayings document that preceeded all of the Gospels. All of these texts, at one time or another, were lost to the world until found within the last 120 year by travelers or archeologists. Although some are considered to be pseudepigraphic, they carry significant meaning and insight into events of that time.

5 Books the Secret Government Hopes You'll Never Read. Melissa Melton The Daily Sheeple March 10th, 2015 Reader Views: 8,519 There are books that get heavily promoted, wind up on bestseller lists everywhere before the ink has even dried on the pages, and you randomly see everyone at the airport carrying a copy under their arm as if they are being handed out for free with the plane tickets… And then there are books like the ones on this list that, if the establishment gets its way, you will never so much as lay eyes on. 1. 63 Documents the Government Doesn’t Want You to Read Sure, the title makes it seem pretty obvious, but I’ve got to wonder if people passed this one up largely based on the polarizing conspiracy figure that Jesse Ventura has become. 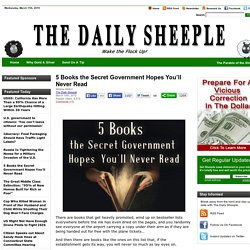 The book itself is filled with an eye-opening array (a primer if you will) of actual government documents that paint a picture of who our government does and does not represent. And speaking of the CIA… 2. To put it bluntly, the Central Intelligence Agency did not want this book to come out. 3. 4. Redes de publicaciones y bibliotecas digitales.

The Literary United States: A Map of the Best Book for Every State. Maps. Literatura Brasileira. PDFs. 100 Extensive University Libraries from Around the World that Anyone Can Access. Universities house an enormous amount of information and their libraries are often the center of it all. 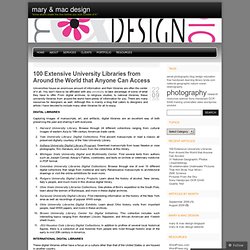 You don’t have to be affiliated with any university to take advantage of some of what they have to offer. From digital archives, to religious studies, to national libraries, these university libraries from around the world have plenty of information for you. There are many resources for designers as well. Although this is mainly a blog that caters to designers and artists I have decided to include many other libraries for all to enjoy. Capturing images of manuscripts, art, and artifacts, digital libraries are an excellent way of both preserving the past and sharing it with everyone. Harvard University Library. These digital libraries either have a focus on a culture other than that of the United States or are housed in another country. The Digital South Asia Library. These libraries offer books or texts for you to read online and free of charge.