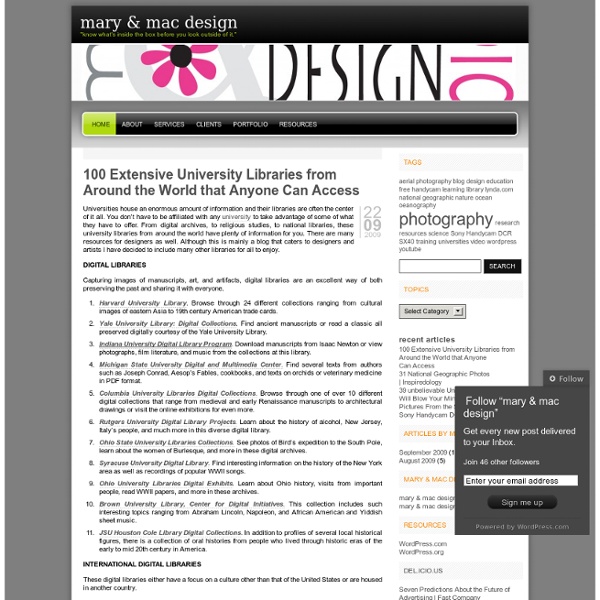 Universities house an enormous amount of information and their libraries are often the center of it all. You don’t have to be affiliated with any university to take advantage of some of what they have to offer. From digital archives, to religious studies, to national libraries, these university libraries from around the world have plenty of information for you. There are many resources for designers as well. Although this is mainly a blog that caters to designers and artists I have decided to include many other libraries for all to enjoy. Capturing images of manuscripts, art, and artifacts, digital libraries are an excellent way of both preserving the past and sharing it with everyone.

Libraries in Second Life By 2007, there were more than 40 libraries in Second Life and the number is increasing.[1] Many of those libraries can be found in Cybrary City,[2] part of the information archipelago on Second Life. This place was built for libraries to set up their virtual services and for displaying their resources. Libraries can provide their services while also learning new skills for 21st-century librarianship. Second Life libraries[edit] Library services in Second Life can be found at the following SL locations: Video // Current To Our Faithful Current.com Users: Current's run has ended after eight exciting years on air and online. The Current TV staff has appreciated your interest, support, participation and unflagging loyalty over the years.

The Online Learning Blog from Study2U Supposedly browsing the internet requires more brain power than watching television. Although judging from some of the websites we’ve come across that assumption is cast into doubt. Here’s some of the sites we like that might get your brain to sit up and listen. 100 Incredible Lectures from the World’s Top Scientists Posted on Thursday June 18, 2009 by Staff Writers By Sarah Russel Unless you’re enrolled at one of the best online colleges or are an elite member of the science and engineering inner circle, you’re probably left out of most of the exciting research explored by the world’s greatest scientists. But thanks to the Internet and the generosity of many universities and online colleges, you’ve now got access to the cutting edge theories and projects that are changing the world in this list below. If you’re looking for even more amazing lectures, check out our updated list for 2012 with more talks from great minds. General

40 Belief-Shaking Remarks From a Ruthless Nonconformist If there’s one thing Friedrich Nietzsche did well, it’s obliterate feel-good beliefs people have about themselves. He has been criticized for being a misanthrope, a subvert, a cynic and a pessimist, but I think these assessments are off the mark. I believe he only wanted human beings to be more honest with themselves. He did have a remarkable gift for aphorism — he once declared, “It is my ambition to say in ten sentences what others say in a whole book.” The Great Geek Manual » The World’s Most Beautiful Libraries I make no secret of the fact that I’m a hardcore bibliophile, but we’re a common enough lot these day. And the one sight that always makes me linger over a webpage is rows and rows of neatly organized books. So, in an effort to draw more like-minded read here to my little blog, I decided to round-up a gallery of photos of some of the most beautiful libraries I’ve ever seen photos of. Enjoy. If you enjoy this gallery, make sure you check out our other list of The United States’ Most Beautiful Libraries!

Channel N: Brain and behavior videos All About World Bipolar Day By Sandra Kiume For World Bipolar Day on March 30, 2014, Matthew McKenzie of London, England created a video to celebrate and inform. Continue reading… » High Tech Suicide Prevention Two suicide prevention advocates from Grassroots Suicide Prevention talk about developments in e-health, including search engines, smartphones, and social media. 45 Free Online Computer Science Courses Missed lectures or hate teachers? Or want to study computer science courses without going to university? … You can study anytime anywhere because there are number of free online computer science courses available on internet that are very interactive. Here is the list of 45 free online computer science courses that are designed by teaching experts from best universities of the world (almost the whole graduation!).

Top 10 Universities With Free Courses Online #1 UC Berkeley Ranked as the #1 public school in the United States, Berkeley offers podcasts and webcasts of amazing professors lecturing. Each course has an RSS feed so you can track each new lecture. A WikiLeaks Clone Takes On Higher Education - Wired Campus Dear University Leaders: You might want to think twice before clicking “send” on your next e-mail. WikiLeaks, scourge of governments worldwide, now has a copycat for academe. And the new group is itching to publish your university’s deepest secrets. Its Web site, UniLeaks, debuted this month with a pair of open letters to university leaders in Australia and Britain.