NEIGHBORS: Housing project board game has message that isn’t playing around. “You must either pay $100 to the bank immediately and go ahead two or move to public housing.” 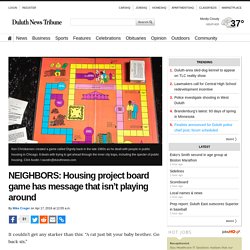 “A policeman stops you on the corner for looking suspicious. Go back two.” This isn’t your father’s Uncle Wiggily game. It’s a game with an objective of surviving public housing. The pitfalls are numerous as one draws cards to move along the board path, trying to reach “Dignity.” The “Homes” were 28 16-story apartment buildings built on 95 acres two miles long and two blocks wide — next to an expressway. Packing that many people into such a small space created problems.

Most of all, Ken Christiansen said, it kept poor people in a cycle they could scarcely be expected to break out of. I tracked Christiansen down in Jacksonville, Fla., where he is retired from 34 years of teaching at Defiance College in Ohio. “It’s not so out of date,” he told me of the social ills found in the game. His volunteer mission was to help people find ways out of poverty. 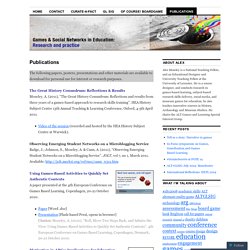 I am happy today to be introducing Aaron Delwiche and Jennifer Jacobs Henderson, the editors of an important new anthology, The Participatory Cultures Handbook. 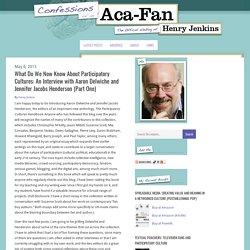 Anyone who has followed this blog over the years will recognize the names of many of the contributors to this collection, which includes Christopher M Kelty, Jason Mittell, Suzanne Scott, Mia Consalvo, Benjamin Stokes, Owen Gallagher, Pierre Levy, Daren Brabham, Howard Rheingold, Barry Joseph, and Paul Taylor, among many others, each represented by an original essay which expands their earlier writings on this topic and seeks to contribute to a larger conversation about the nature of participation (cultural, political, educational) in the early 21st century. Origins of serious games. 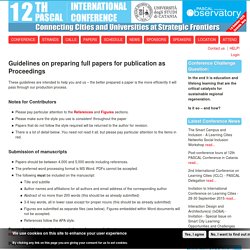 Notes for Contributors Please pay particular attention to the References and Figures sections.Please make sure the style you use is consistent throughout the paperPapers that do not follow the style required will be returned to the author for revision.There is a lot of detail below. You need not read it all, but please pay particular attention to the items in red. Submission of manuscripts Papers should be between 4,000 and 5,000 words including references.The preferred word processing format is MS Word. Papers should be submitted through the conference website at Paper style points Quotations Use single quote marks for quotations integrated within the text, and double quote marks for quotes within these quotes. Numbers Abbreviations/punctuation/spacing Italic/bold Job titles/affiliations/subjects Institutions/organisations/places References Books Report. Mascaro-Goggins-2011.pdf. Sign In. 03003930.2013. 402330898.pdf. 549823b20cf2c5a7e3429e2a.pdf. 10. Radu%20-%20Augmented%20reality%20in%20education%20-%202014.pdf.