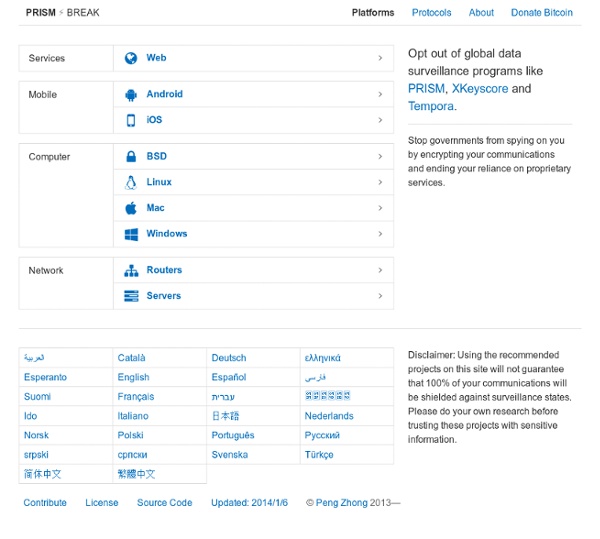 A/I :: Home Ghostery Ghosterians! We have a new release ready for the masses. We found a few issues and made some updates. You all have been awesome sending us some quirky behaviour as well. So to you.. we say "Thanks!" Before we get to the details. PLEASE NOTE: The version # for Firefox is 5.4.10. Here are the notes: Defects: A fix for multiple bugs related to the e10s Electrolysis build.Blank options menu in the old Panel > unable to revert to new panelConflict with Adblock Plus in FFX 43 Features: Capping the wizard setup reinitiation at 3, which should prevent people from getting stuck in the setup wizard loop.Purplebox off by defaultUpdated language in extension stores for Chrome, Opera, and SafariRelease note link has been updated to new siteRemoved an extra step from the Safari setup wizard Your current version should auto-update unless you have turned that off from your browser’s menu, but if not, you can get the new version HERE. ~Happy browsing!

NSA slides explain the PRISM data-collection program AccountKiller Spring Financial is a finance company based in Canada. The company was founded in 2014. Spring Financial is a subsidiary of Canada Drives, which is a leading auto financing company in Canada. The Chief Executive Officer is Michael Galpin. The Director is Cody Green. The Customer Relations Manager is Laura Marchand. Upon loan approval, the funds will go into a secure trust account. Canceling your loan is simple. #Exclusive: Syrian Electronic Army hijacks Microsoft Xbox Instagram and twitter accounts Just few days after, hacking the official twitter account of Skype, Syrian Electronic Army once again has attacked Microsoft. Today, they have hijacked the Official Twitter and Instagram accounts. It appears support twitter have been compromised in the attack. At the time of writing, Microsoft regained the access to both Twitter and Instagram accounts. It is still unknown how hackers managed to compromise these accounts. Sponsored Links We are trying to reach the group for further statement. *Exclusive -Update: One of the member of SEA group told E Hacking News that they have compromised the info by sending an email containing malware file to Microsoft's staff. Hackers told us that "another hack will come soon with publishing the documents of monitoring email accounts by Microsoft".

A Declaration of the Independence of Cyberspace by John Perry Barlow <barlow@eff.org> Governments of the Industrial World, you weary giants of flesh and steel, I come from Cyberspace, the new home of Mind. On behalf of the future, I ask you of the past to leave us alone. You are not welcome among us. You have no sovereignty where we gather. We have no elected government, nor are we likely to have one, so I address you with no greater authority than that with which liberty itself always speaks. Governments derive their just powers from the consent of the governed. You have not engaged in our great and gathering conversation, nor did you create the wealth of our marketplaces. You claim there are problems among us that you need to solve. Cyberspace consists of transactions, relationships, and thought itself, arrayed like a standing wave in the web of our communications. We are creating a world that all may enter without privilege or prejudice accorded by race, economic power, military force, or station of birth. Davos, Switzerland

Ghostery The CIA and Acid | Carpe Noctem - Seize the NightCarpe Noctem – Seize the Night LSD was invented in Switzerland by Albert Hofmann, a researcher for Sandoz pharmaceuticals. The CIA was on to acid long before the flower children. It did not spontaneously appear among the youth of the Western world as a gift from the God of Getting’ High. So, for that matter, were upstanding citizens like Time-Life magnate Henry Luce and his wife, Clare Boothe Luce, who openly sang the praises of their magical mystery tours during the early sixties. While the cognoscenti had the benefit of tuned-in physicians, other psychedelic pioneers took their first trips as part of CIA-controlled research studies. At least one person committed suicide after becoming an unwitting subject of a CIA LSD test, crashing through a high-story plate-glass window in a New York hotel as his Agency guardian watched. MK-ULTRA was the code name the CIA used for its program directed at gaining control over human behavior through “covert use of chemical and biological materials,” as proposed by Richard Helms.

Mozilla Lightbeam Shows Who's Watching You Online In the spirit of online transparency, and for those paranoid about organizations watching your every move, a new tool from Mozilla lets you monitor who is following your digital footprint. Lightbeam is a free extension available for download on Mozilla's Firefox browser that promises to "illuminate the inner workings of the web." It uncovers which third-party companies are watching your online activity — most likely brands and advertisers looking to share your data or directly target ads. "As a part of Lightbeam, we're creating a big-picture view of how tracking works on the Internet, and how third-party sites are connected to multiple other sites," Mozilla said in a statement. The company aims to give web users control of their data and privacy by using interactive visualizations in the form of graphs, clocks and lists. "The visualization grows with every site you visit and every request made from your browser," Mozilla said in the statement. Have something to add to this story?

The Tin Hat | Simple Online Privacy Guides and Tutorials FEBE How the NSA's Domestic Spying Program Works The NSA’s domestic spying program, known in official government documents as the “President’s Surveillance Program,” ("The Program") was implemented by President George W. Bush shortly after the attacks on September 11, 2001. The US Government still considers the Program officially classified, but a tremendous amount of information has been exposed by various whistleblowers, admitted to by government officials during Congressional hearings and with public statements, and reported on in investigations by major newspaper across the country. Our NSA Domestic Spying Timeline has a full list of important dates, events, and reports, but we also want to explain—to the extent we understand it—the full scope of the Program and how the government has implemented it. In the weeks after 9/11, President Bush authorized the National Security Agency (NSA) to conduct a range of surveillance activities inside the United States, which had been barred by law and agency policy for decades.