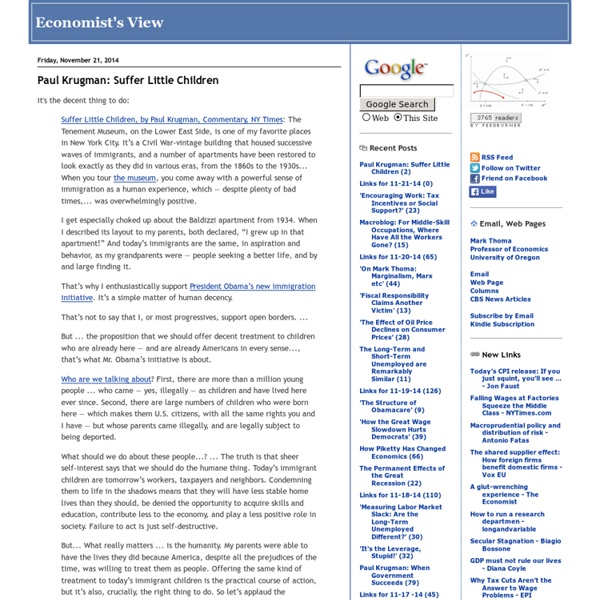 When Will The Fed Change Its Reaction Function?, by Tim Duy: The March FOMC minutes were generally interpretted as having a dovish tenor, contrasting with the generally hawkish reception for the statement and ensuing press conference. Overall, the Fed appears committed to a long period of low interest rates and I continue to think this should be the baseline view. But actually policy seems to remain hawkish relative to the Fed's rhetoric. By its own admission, the Fed is missing badly on both its mandates. Why then the push to reduce accommodation by ending asset purchases and laying the groundwork for the first rate hike?

Vickrey, William. 1996. 15 Fatal Fallacies of Financial Fundamentalism Fifteen Fatal Fallacies of Financial Fundamentalism A Disquisition on Demand Side Economics William Vickrey October 5, 1996 Much of the conventional economic wisdom prevailing in financial circles, largely subscribed to as a basis for governmental policy, and widely accepted by the media and the public, is based on incomplete analysis, contrafactual assumptions, and false analogy. For instance, encouragement to saving is advocated without attention to the fact that for most people encouraging saving is equivalent to discouraging consumption and reducing market demand, and a purchase by a consumer or a government is also income to vendors and suppliers, and government debt is also an asset.

David Leonhardt - Economix Blog Julian Simon, frustrated by the huge attention that Paul Ehrlich was receiving for his apocalyptic warnings about overpopulation, offered Mr. Ehrlich a bet in 1980. If a selected basket of commodities became more expensive over the coming decade — which would signal scarcity caused by a crowded planet — Mr. Ehrlich, an ecologist, would win the bet. Economics Roundtable January 2014 Payroll Employment We are getting closer to the previous peak. Click on the image to get a bigger version. Jobs Real Time Economics China’s GDP growth fell in the first quarter to its slowest pace since September of 2012, slipping to 7.4% on-year growth from 7.7% the in the fourth quarter. The increase was slightly higher than economists’ expectations of a 7.3% gain. Authorities released other data that suggested continuing weakness, but not at a quickening pace. Industrial production grew 8.8% on year in March below expectations of 9% but up from an average 8.6% expansion in January and February, combined to limit distortions from the Lunar New Year holidays.

Budget and Economic Outlook: Fiscal Years 2011 to 2021 The United States faces daunting economic and budgetary challenges. The economy has struggled to recover from the recent recession, which was triggered by a large decline in house prices and a financial crisis—events unlike anything this country has seen since the Great Depression. During the recovery, the pace of growth in the nation's output has been anemic compared with that during most other recoveries since World War II, and the unemployment rate has remained quite high. For the federal government, the sharply lower revenues and elevated spending deriving from the financial turmoil and severe drop in economic activity—combined with the costs of various policies implemented in response to those conditions and an imbalance between revenues and spending that predated the recession—have caused budget deficits to surge in the past two years.

The 1% are the very best destroyers of wealth the world has ever seen If wealth was the inevitable result of hard work and enterprise, every woman in Africa would be a millionaire. The claims that the ultra-rich 1% make for themselves – that they are possessed of unique intelligence or creativity or drive – are examples of the self-attribution fallacy. This means crediting yourself with outcomes for which you weren't responsible. Many of those who are rich today got there because they were able to capture certain jobs. The RAND Journal of Economics Winter 2014 Volume 45, Issue 4, Pages 675–917 In This Issue Back Issues of the RAND Journal of Economics Individual articles and issues from 2006 to present are available either with a subscription or for a fee from Wiley-Blackwell Publishing.

Brave New World Today’s Financial Times articles: Swiss central bank discord provides a warning bell (Feb 24), Sovereigns turn to pre-crisis financial wizardry (Feb 24) On facing pages in the print version of the FT, the reader is invited to consider the encounter of the modern state with the modern market. On the left hand page the story is about the central bank, on the right hand page the story is about the Treasury, and on both pages the story is about the continuing reverberations of the Global Financial Crisis and the changing role of both central banks and Treasuries as a consequence of financial globalization. In a piece ostensibly about the political trials of the Swiss National Bank in the face of losses after failed intervention to stem currency appreciation, Gillian Tett includes the following paragraph:

United States federal budget Fiscal Year 2013 U.S. Federal Spending – Cash or Budget Basis. Fiscal Year 2013 U.S. The Neuroeconomics Revolution - Robert J. Shiller Exit from comment view mode. Click to hide this space NEW HAVEN – Economics is at the start of a revolution that is traceable to an unexpected source: medical schools and their research facilities. Economics blog from the Financial Times Global economic recovery stuck below takeoff speed By Eswar Prasad and Karim Foda The global economic recovery remains stuck below takeoff speed, unable to achieve liftoff and facing the risk of stalling. Half-hearted fiscal austerity measures are proving to be a drag on growth and doing little to rebuild investor and consumer confidence. Monetary policy continues to shoulder the burden of limiting downside risks and has kept financial markets buoyant even in the face of weak growth prospects.

ataxingmatter In Part I, I outlined some of the many ways in which the U.S. provides favorable treatment to religious institutions and/or their representatives, including income exclusions from the federal income tax for ministers that are unavailable to any other occupation. In this Part II, I want to consider how the corporatization of religion relates to increased politicization of religious fundamentalism in recent decades and the religious right's incessant push to influence public policies. Then in Part III I will return to the uneasy juncture of religious freedom claims and taxation.