The Hammock Fallacy. Hypocrisy is the tribute vice pays to virtue. 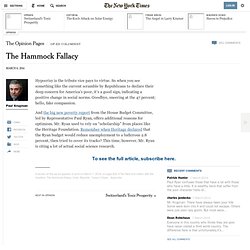 So when you see something like the current scramble by Republicans to declare their deep concern for America’s poor, it’s a good sign, indicating a positive change in social norms. Goodbye, sneering at the 47 percent; hello, fake compassion. And the big new poverty report from the House Budget Committee, led by Representative Paul Ryan, offers additional reasons for optimism. Mr. Ryan used to rely on “scholarship” from places like the Heritage Foundation. Unfortunately, the research he cites doesn’t actually support his assertions. Don’t Blink! The Hazards of Confidence.

Is Islam Compatible with Capitalism? by Guy Sorman, City Journal Summer 2011. The Middle East’s future depends on the answer. 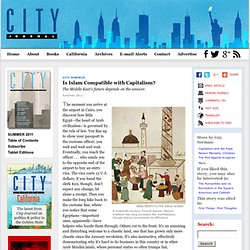 BeBa/Iberfoto/The Image Works A sixteenth-century Turkish bazaar. Muslim tradition has long accepted the marketplace, though sharia constrained its efficiency. The moment you arrive at the airport in Cairo, you discover how little Egypt—the heart of Arab civilization—is governed by the rule of law. You line up to show your passport to the customs officer; you wait and wait and wait. The airport experience, had he been able to undergo it, would have been drearily familiar to Rifaa al-Tahtawi, a brilliant young imam sent to France in 1829 by the pasha of Egypt.

It's Still the Economy, Stupid. More Than 1 Billion People Are Hungry in the World - By Abhijit Banerjee and Esther Duflo. For many in the West, poverty is almost synonymous with hunger. 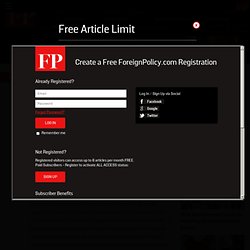 Indeed, the announcement by the United Nations Food and Agriculture Organization in 2009 that more than 1 billion people are suffering from hunger grabbed headlines in a way that any number of World Bank estimates of how many poor people live on less than a dollar a day never did. But is it really true? Are there really more than a billion people going to bed hungry each night? Our research on this question has taken us to rural villages and teeming urban slums around the world, collecting data and speaking with poor people about what they eat and what else they buy, from Morocco to Kenya, Indonesia to India. We've also tapped into a wealth of insights from our academic colleagues. But unfortunately, this is not always the world as the experts view it. Jeffrey Sachs, an advisor to the United Nations and director of Columbia University's Earth Institute, is one such expert.

This debate cannot be solved in the abstract. Why? Matt Taibbi on Deluded Tea Partiers, Ayn Rand and How the U.S. Is Like the Soviet Union. November 21, 2010 | Like this article? 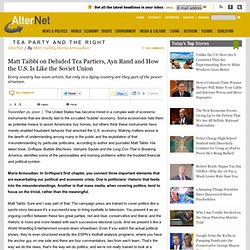 Join our email list: Stay up to date with the latest headlines via email. The United States has become mired in a complex web of economic instruments that are directly tied to the so-called “bubble” economy. Some economists held them as potential means to assist Americans buy homes, but others think these instruments have merely enabled fraudulent behavior that wrecked the U.S. economy. Maria Armoudian: In Griftopia’s first chapter, you connect three important elements that are exacerbating our political and economic crisis. Matt Taibbi: Sure and I was part of that. MA: And the rhetoric that you find that has been used over and over from politicians.

MT: Right. MA: How does the Tea Party fit in with your overall assessment of our economic disasters? The Crisis of Credit Visualized. State Capitalism: Ian Bremmer. Game changers: Five opportunities for US growth and renewal. The US economy is struggling to find a new formula for vigorous growth. 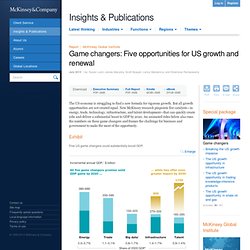 But all growth opportunities are not created equal. New McKinsey research pinpoints five catalysts—in energy, trade, technology, infrastructure, and talent development—that can quickly create jobs and deliver a substantial boost to GDP by 2020. An animated video below also runs the numbers on these game changers and frames the challenge for business and government to make the most of the opportunity.