The Three Best Times To Ask For A Raise. The country losing out in the breakfast juice battle. Image copyright Rural Producers Union of Taquaritinga. 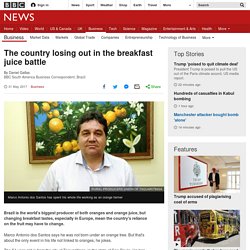 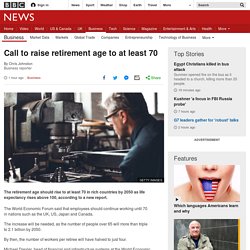 The World Economic Forum said that employees should continue working until 70 in nations such as the UK, US, Japan and Canada. The increase will be needed, as the number of people over 65 will more than triple to 2.1 billion by 2050. By then, the number of workers per retiree will have halved to just four. Michael Drexler, head of financial and infrastructure systems at the World Economic Forum, said the expected rise in longevity was the financial equivalent of climate change. Why a $1.6bn car plant has been left to decay. Mexico is currently the world's fourth largest car exporter, but could US President Donald Trump's plans to renegotiate the North American Free Trade Agreement (Nafta) between the US, Canada and Mexico bring this to an end? 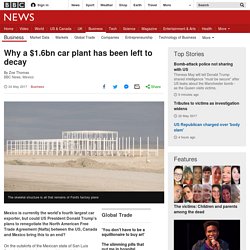 On the outskirts of the Mexican state of San Luis Potosi, the skeletal remains of the partially constructed Ford plant loom over the desert. Election 2017: What jobs do UK workers actually do? Image copyright Getty Images Politicians of all parties spend election campaigns fighting for the votes of what they call "ordinary" or "hard-working" people. 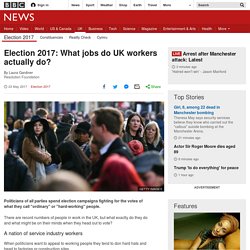 There are record numbers of people in work in the UK, but what exactly do they do and what might be on their minds when they head out to vote? A nation of service industry workers. The Economist - Graphic detail. The Biggest Non-Government Employer in Each State. Robots to affect up to 30% of UK jobs, says PwC. Image copyright AFP Robotics and artificial intelligence could affect almost a third of UK jobs by the 2030s, according to a study. 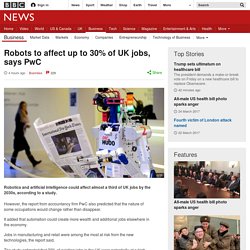 However, the report from accountancy firm PwC also predicted that the nature of some occupations would change rather than disappear. It added that automation could create more wealth and additional jobs elsewhere in the economy. Jobs in manufacturing and retail were among the most at risk from the new technologies, the report said. The guy running Trump's trade policy just wrote a seriously troubling op-ed in The Wall Street Journal. Reuters Peter Navarro writes like a man ready to start a trade war. 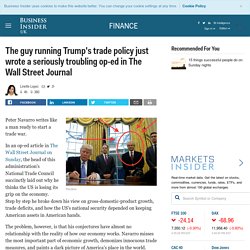 In an op-ed article in The Wall Street Journal on Sunday, the head of this administration's National Trade Council succinctly laid out why he thinks the US is losing its grip on the economy. Step by step he broke down his view on gross-domestic-product growth, trade deficits, and how the US's national security depended on keeping American assets in American hands.

The problem, however, is that his conjectures have almost no relationship with the reality of how our economy works. What is Trumpenomics, according to Peter Navarro? Arrows around Peter Navarro, the head of Trump's National Trade Council. 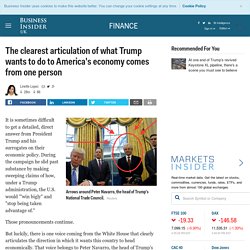 Reuters It is sometimes difficult to get a detailed, direct answer from President Trump and his surrogates on their economic policy. During the campaign he slid past substance by making sweeping claims of how, under a Trump administration, the U.S. would '"win bigly" and "stop being taken advantage of. " In ‘Brexit’ Speech, Theresa May Outlines a Clean Break for U.K. Ffee shops on the march as pubs decline, town centre data shows. Image copyright Getty Images The great British pub continues to make way for coffee shops and eateries on our High Streets, but it remains the most popular leisure venue in the UK. 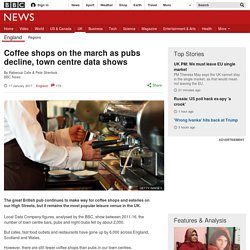 Local Data Company figures, analysed by the BBC, show between 2011-16, the number of town centre bars, pubs and night clubs fell by about 2,000. But cafes, fast food outlets and restaurants have gone up by 6,000 across England, Scotland and Wales. Instead of immigrants, automation may take away more jobs. Japan firm considers 3-day weekends as nation rethinks culture of long work hours. TOKYO — Japan is stepping up its drive to pressure companies into abandoning a culture of long working hours. 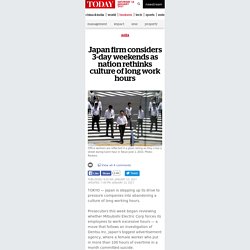 Prosecutors this week began reviewing whether Mitsubishi Electric Corp forces its employees to work excessive hours — a move that follows an investigation of Dentsu Inc, Japan’s biggest advertisement agency, where a female worker who put in more than 100 hours of overtime in a month committed suicide. Mitsubishi Electric said in a statement that it will “deal sincerely with the matter” and will monitor work hours closely and educate managers and employees on the issue. The labour ministry will continue to take a firm stance against long work hours, according to a spokesman who asked not to be named due to ministry policy. Soaring childlessness among southern European women - report. Image copyright AFP Women in Europe are having fewer children, particularly in southern Europe, a French report has found. 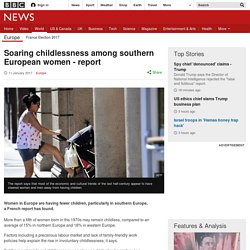 More than a fifth of women born in the 1970s may remain childless, compared to an average of 15% in northern Europe and 18% in western Europe. Rich and poor teenagers use the web differently – here's what this is doing to inequality. In many countries, young people from wealthy and poor backgrounds spend roughly the same amount of time online. But it’s how they’re using the internet, not how long they’re using it that really matters. This is according to new research from the OECD, which found that richer teenagers were more likely to use the internet to search for information or to read news rather than to chat or play video games.

What’s Up With That: Building Bigger Roads Actually Makes Traffic Worse. More Americans choosing to retire outside US. Newly widowed, Kay McCowen quit her job, sold her house, applied for Social Security and retired to Mexico. It was a move she and her husband, Mel, had discussed before he passed away in 2012. "I wanted to find a place where I could afford to live off my Social Security," she said. "The weather here is so perfect, and it's a beautiful place. " She is among a growing number of Americans who are retiring outside the United States. The number grew 17 percent between 2010 and 2015 and is expected to increase over the next 10 years as more baby boomers retire. Just under 400,000 American retirees are now living abroad, according to the Social Security Administration. City's annual cost per inmate is nearly $168,000 study says. New York City is an expensive place to live for just about everyone, including prisoners.

The city paid $167,731 to feed, house and guard each inmate last year, according to a study the Independent Budget Office released this week. “It is troubling in both human terms and financial terms,” Doug Turetsky, the chief of staff for the budget office, said on Friday. With 12,287 inmates shuffling through city jails last year, he said, “it is a significant cost to the city.” Mr. 38% of US Households Spend More Than Income - Shnugi. Elon Musk: “There’s a Pretty Good Chance We’ll End Up With Universal Basic Income” Universal and basic Elon Musk just joined a number of other financial experts who are suggesting that universal basic income (UBI) may be the solution to the looming problem of unemployment, which stands to arise due to the large-scale automation of jobs as a result of artificial intelligence (AI).

How we became more than 7 billion – humanity’s population explosion, visualised. Free to Choose: Part 1 of 10 The Power of the Market (Featuring Milton Friedman) The International Role of the Dollar: Theory and Prospect by Paul krugman. Euro founding father Otmar Issing warns about project's future. Image copyright AFP A founding father of monetary union has given a damning assessment of the euro bloc, saying that not incorporating an exit strategy was a mistake. Prof Otmar Issing told the BBC's Wake up to Money that faultlines across the eurozone remain, citing economic weakness in Greece, Portugal and Italy. The European Central Bank's first chief economist also warned about the impact of negative interest rates. And he said political pressures threatened central banks' independence. Prof Issing told the BBC that structural problems in the eurozone and dwindling public support in some countries were still major problems. The euro currency was "stable and performing much better than expected", he said.

Countries that tipped the bloc into recession during the global financial meltdown were still in serious economic trouble. Audio shows Theresa May is pushing for a Brexit deal she knows will fail the country. Reuters/Pool Prime Minister Theresa May is pushing Britain into a "hard Brexit," which will see the UK leaves the European Union without a trade deal. World population living in extreme poverty, 1820-2015 - Our World In Data. 'Hard Brexit' or 'no Brexit' for Britain - Tusk. Image copyright AP. Ethics for an Age of Commerce. Flash crash sees the pound gyrate in Asian trading. Image copyright Bloomberg. Hard Brexit 'could cost financial sector £38bn'

Image copyright ODD ANDERSEN The financial industry could lose £38bn if the UK quits the single market, a report commissioned by a group lobbying on behalf of the City has said. Chinese billionaire Wang Jianlin warns of 'biggest bubble in history' - Sep. 28, 2016. It's the "biggest bubble in history," he told CNNMoney in an exclusive interview Wednesday. Bubble is a sensitive word in China after the dramatic rise and spectacular crash in the country's stock market last year, which wiped out the savings of millions of small investors who thought Beijing wouldn't allow the market to drop. Everybody Thinks They’re Middle-Class. Population by age.

Interactive: Here’s why men on earth outnumber women by 60 million. Why the former USSR has far fewer men than women. In our map above, countries depicted in the darkest blues have far fewer men than women – and the former Soviet Union stands out from the rest of the world. This region has been predominantly female since at least World War II, when many Soviet men died in battle or left the country to fight. In 1950, there were just 76.6 men per 100 women in the territory that is now Russia. That number rose steadily in subsequent decades, climbing to 88.4 by 1995 before declining again. The gender ratio in Russia is currently 86.8 men per 100 women, and the ratios in Latvia (84.8), Ukraine (86.3), Armenia (86.5), Belarus (86.8) and other former Soviet nations are similarly low.

The real reason this elephant chart is terrifying – NewCo Shift. The Real World After Brexit. A deal on Brexit was never going to be easy  Germans should have to work until 69, says Bundesbank. Return on UK government bonds turns negative. Helicopter Money. The Search for the Elusive Natural Interest Rate. Millennials 'set to earn less than Generation X' 'Two lost decades' for Italy's economy. HSBC avoided US money laundering charges 'because of market risk' Alvin Toffler: What he got right - and wrong. 76 million Americans are struggling financially or just getting by - Jun. 10, 2016.