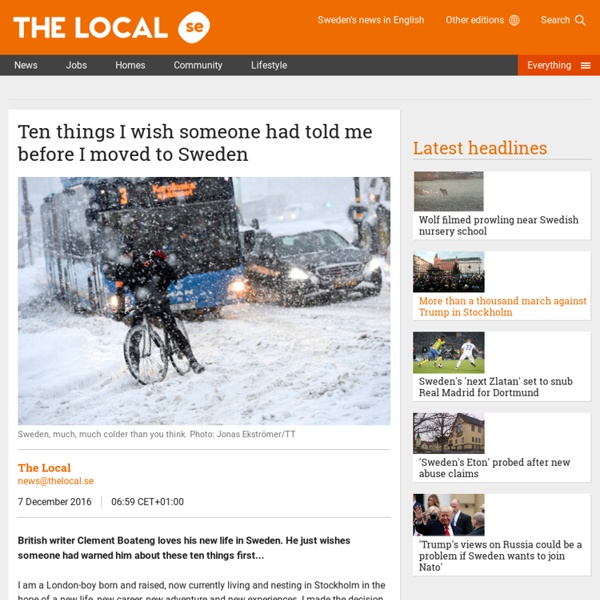 Sweden, much, much colder than you think. Photo: Jonas Ekströmer/TT British writer Clement Boateng loves his new life in Sweden. He just wishes someone had warned him about these ten things first... I am a London-boy born and raised, now currently living and nesting in Stockholm in the hope of a new life, new career, new adventure and new experiences. I made the decision to relocate to Sweden after experiencing Midsummer and was happy about that as I feel Stockholm suits my personality. 1. I previously thought London was cold. 2. It really is tough if you do not speak Swedish. 3. Black seems to be the uniform colour here for everything. 4. There is another unspoken rule that says one must never be within an arm's reach of each other. 5. For a while now, the Swedish have been mislabelled as quite forward, blunt or even harsh with their use of English. 6. Completely off topic but still important nonetheless, is the topic of pizza. 7. Not five minutes late or five minutes early. 8. 9. 10.

Related:  Reading • Around the world • esl

The man who cycled from India to Europe for love Image copyright PK Mahanandia Indian artist PK Mahanandia met Charlotte Von Schedvin on a winter evening in Delhi in 1975 when she asked him to draw her portrait. What eventually followed was an epic bicycle journey from India to Europe - all for love. Electing US President, year 5-6 – WebEnglish.se Background These materials have been chosen to suit at least stronger students in year 5-6. Warm-up “I’ll Be the President” (3:06) A fun rap about the process of becoming a presidentWhat do kids want in a president? (1:20) Kids talk about what kind of person they think the next president should be like.

10 Innovative Learning Stations That Get Students Reading Whenever I would introduce a new novel to my students, I always got the same reaction: Students moaned and groaned about the storyline, expressed their lack of interest in the author’s writing style, and proclaimed their everlasting boredom with the class as a whole. In order to avoid student complaints, I decided to implement book clubs in my classroom—students now have the opportunity to work in groups and choose what book they as a group want to read for a given unit. In order to make this work, there are a few things you should do. Have the students work together in groups of three or four, and offer the groups their choice of books—you should select options that ensure that students are still following Common Core standards.

India We've got Indian flag printables for your classroom projects or to decorate your home, perfect... Have a go at some of our Indian-themed crafts for children for a real flavour of India! We've... We've got a lovely colouring page of two Indian children in traditional costume for the kids to... We've posters, story paper and learn to draw tutorials to print for an India project. India is a country of stories and vivid colours. 21 Actual Analogies Used By High School Students in English Essays. 1. When she tried to sing, it sounded like a walrus giving birth to farm equipment. 2. Her eyes twinkled, like the moustache of a man with a cold. 3. She was like a magnet: Attractive from the back, repulsive from the front.

British Council by Julie Bray Question: Where do pyjamas, yoga, curry, gurus and Bollywood films come from? Answer: India, of course! The Most Read Book Among High School Seniors From Each State, in One Surprising Map Native Americans living in the Northeast, like Game of Thrones fans, knew one thing at this time of year: Winter is coming. As such, now was the time for one last glut of food before a four-month-at-least period of traveling along with migrating prey in order to hunt for fresh food. In that sense, yes, Native American harvest feasts are a clear primogenitor to today's Thanksgiving. But the truth is more complex. As Thanksgiving matured as a holiday in the Americas, many of the inhabitants in the United States — Native Americans, settlers and enslaved Africans — contributed elements of our modern Thanksgiving meal to the table. If Thanksgiving is an American tradition, then its roots are as varied and widespread as America, as well.

Read Dating: A Fun Way to Motivate Struggling Readers “I hate reading.” No three words frustrate me more than these. What enrages me about this phrase is that it is a lie. Students love reading. They read hundreds of texts and newsfeeds every day. They just hate boring reading. ndla Canada - The Tale of the Inuit and Their Land Update Required To play the media you will need to either update your browser to a recent version or update your Flash plugin. Canada - The Tale of the Inuit and Their Land Inuit Art on display in Jordan, Ontario The Inuits belonged to nomadic tribes that moved over large arctic areas, hunting caribou, seals, fish and polar bears.