The future of the internet: A virtual counter-revolution 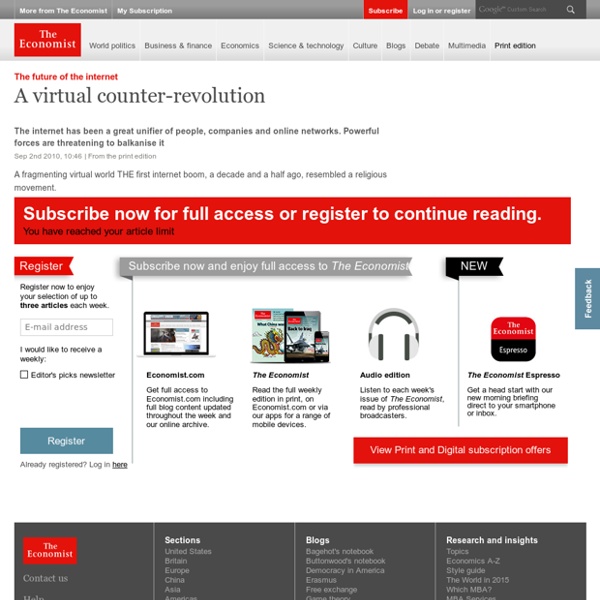 Are we on information overload? The last two decades have completely transformed the way we know. Thanks to the rise of the Internet, information is far more accessible than ever before. It’s more connected to other pieces of information and more open to debate. Organizations — and even governmental projects like Data.gov — are putting more previously inaccessible data on the Web than people in the pre-Internet age could possibly have imagined. But this change raises another, more ominous question: Is this deluge overwhelming our brains? In his new book, “Too Big to Know,” David Weinberger, a senior researcher at Harvard’s Berkman Center for Internet and Society, attempts to answer that question by looking at the ways our newly interconnected society is transforming the media, science and our everyday lives. Salon spoke to Weinberger over the phone about the rise of the information cloud, the demise of expert knowledge, and why this is the greatest time in human history. Yes. Yes, exactly. OK. It’s both good and bad.

Texas Launches Antitrust Investigation of Google It has been revealed that the office of Texas Attorney General Greg Abbott is conducting an investigation of Google over complaints of antitrust and anti-competitive behavior, and the search giant is responding. According to Search Engine Land, the state of Texas' investigation is focused on whether Google manipulates its search results to the detriment of its competition. The investigation was sparked by complaints from vertical search engines Foundem, SourceTool/TradeComet and myTriggers. Google has since responded to the report via a blog post from Deputy General Counsel Don Harrison. "We look forward to answering their questions because we’re confident that Google operates in the best interests of our users," Harrison said in the company's response. Google is facing a similar investigation from the European Commission over whether it manipulates search results to stifle competition. What do you think of the investigation?

Do We Need Doctors Or Algorithms? Editor’s note: This is Part II of a guest series written by legendary Silicon Valley investor Vinod Khosla, the founder of Khosla Ventures. In Part I, he laid the groundwork by describing how artificial intelligence is a combination of human and computer capabilities. In Part III, he will talk about how technology will sweep through education. I was asked about a year ago at a talk about energy what I was doing about the other large social problems, namely health care and education. Later, I got to cogitating about what I had said and why, and how embarrassingly wrong that might be. Assessing Current Healthcare Let’s start with healthcare (or sickcare, as many knowledgeable people call it). The entire encounter should take no more than 15 minutes and usually takes probably less than that. So what’s wrong with this situation? Looking at this, I cannot help but think that this is a completely antiquated system (regardless of whether it is healthcare or not)! Envisioning Future Healthcare

The Case for the Commons: Reclaiming our Shared Resources Divided We Fall When politicians talk about getting the country "back on track," what does that mean? When did we ... This article is part of a series of articles on the commons. For more, read The Science of Cooperation and A New Political Dawn. For more writing on the commons from the alternative press, visit utne.com/Commons. The first three times I heard the word commons, I had no idea what it meant. Although it is often associated with Britain and its colonies, the commons as place and process can be found in societies from Central America to South Asia and, most recently, cyberspace. The term “tragedy of the commons” was coined by microbiologist Garrett Hardin in a 1968 Science article, in which he asked what happens when individuals compete for a scarce resource. In many ways, Hardin’s world looks a lot like our own, as we destroy it at a pace made more frantic by the recession. Scratch the surface, though, and Hardin’s arguments blame the victim. The barons rebelled.

The Surprising Path Of Artificial Intelligence Editor’s note: This is Part I of a three-part guest post written by legendary Silicon Valley investor Vinod Khosla, the founder of Khosla Ventures. In Part II, he will describe how software and mobile technologies can augment and even replace doctors. In Part III, he will talk about how technology will sweep through education. Forty years ago this December, President Nixon declared a war on cancer, pledging a “total national commitment” to conquering the disease. Fifty years ago this spring, President Kennedy declared a space race, promising to land a man safely on the moon before the end of the decade. And 54 years ago, Artificial Intelligence pioneer Herbert Simon declared “there are now in the world machines that think” and predicted that a computer would be world chess champion within 10 years. Though we made it to the moon the efforts in cancer and artificial intelligence have failed in their larger ambitions but have made progress. Quoting another writer:

Texas Attorney General Investigating Google &amp; Antitrust Issues Texas Attorney General Greg Abbott is conducting an investigation into Google’s business practices as they relate to search listings, in particular whether Google is manipulating its paid and editorial results in a way that violates antitrust laws. We received a tip about the investigation this week, and Google confirmed today that an investigation started in July. The company plans to post to its blog later today about the matter. According to Google, the Texas Attorney General’s office is seeking more information about allegations that have been levied against Google by: UK-based FoundemNew York-based SourceTool & TradeCometOhio-based myTriggers Why an attorney general based out of Texas is investigating allegations made by non-Texas companies is unclear. As for the Texas AG’s office itself, it had no comment when I asked today about the investigation. Our long-standing policy is that we do not acknowledge investigations of any kind. My view is the arguments are generally absurd.

Intel tries to help Stephen Hawking keep talking - latimes.com Intel Corp. is trying to help physicist Stephen Hawking keep speaking. Intel chief technology officer Justin Rattner told the Associated Press that the tech giant has a research team in Britain that is trying to come up with a new speech system for Hawking, who is severely diasabled by Lou Gehrig's disease. The goal is to keep Hawking's speech from continuing to slow. It's a tedious process for Hawking to speak. Rattner was to introduce Hawking on Sunday at the 70th birthday celebration for the renowned theoretical astrophysicist, but Hawking was too ill to attend. Hawking, author of the bestseller "A Brief History of Time" in 1988, has been honored for his breakthroughs in theories about time and relativity. Intel has a long history with Hawking. "Intel's newest Pentium processor technology keeps me connected to the world," Hawking said at the time. Book review: 'Stephen Hawking: An Unfettered Mind' 'Fabric of the Cosmos' review: time, space and string theory -- Pat Benson

10 Reading Revolutions Before E-Books - Science and Tech 1. The phrase "reading revolution" was probably coined by German historian Rolf Engelsing. He certainly made it popular. Engelsing was trying to describe something he saw in the 18th century: a shift from "intensive" reading and re-reading of very few texts to "extensive" reading of many, often only once. Think of reading the Bible vs reading the newspaper. History, of course, is rarely so neat, and other historians quickly found counterexamples of extensive premodern reading (Cicero and his letters) and intensive reading today (the way the Romantics brooded over The Sorrows of Young Werther, or our contemporaries over that very different contemporary Werther, Harry Potter). 2. But first, let's apply a clean explanatory schema or three to the print revolution to see how each one fits. 3. This fusion of orality and literacy helps explain the potency of classical Hellenic culture. 4. 5. 6. 7 & 8. 9. And that's the common thread to all of these revolutions. 10. Images: 1.