Stop! Hammertime With Hammer for Mac. Looking for the best way to make static HTML sites on your Mac? 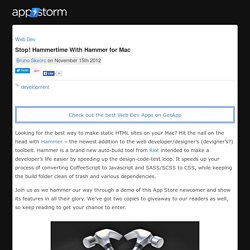 Hit the nail on the head with Hammer – the newest addition to the web developer/designer’s (devigner’s?) Toolbelt. Hammer is a brand new auto-build tool from Riot intended to make a developer’s life easier by speeding up the design-code-test loop. It speeds up your process of converting CoffeeScript to Javascript and SASS/SCSS to CSS, while keeping the build folder clean of trash and various dependencies. Join us as we hammer our way through a demo of this App Store newcomer and show its features in all their glory. When we compare the olden days of web design and development in the early 1990s and the web today, the leap we’ve made as a technologically obsessed species becomes staggeringly apparent.

Note: this review is done with a pre-release version of Hammer, and some options may differ slightly in look and functionality in the final release. Let’s see what it can do Installing is, of course, as simple as ever. Includes. Hammer on the Mac App Store. Hammer for Mac 1.7 - Available Now. Hammer & Anvil: Two Unbelievably Awesome New Web Development Tools. Hammer First up is Hammer, a real leap forward in the area of static site development. 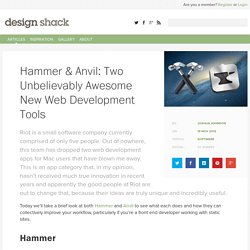 If you love the kind of stuff that PHP does, but either don’t know PHP or simply don’t want to mess with it in your small projects, you’ll love Hammer. Hammer for Mac lets you build static HTML sites, minus the fuss. If there’s a team with an insane attention to detail and a style of design that’s almost akin to that of Apple’s, then that team would be the same creators of one of the most beautiful web development tools on the market. 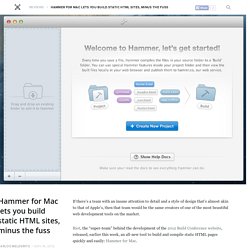 Riot, the “super-team” behind the development of the 2012 Build Conference website, released, earlier this week, an all-new tool to build and compile static HTML pages quickly and easily: Hammer for Mac. So, what’s Hammer for? Most web designers and developers often have folders and folders of webpage design drafts full of HTML files, image assets, stylesheets, scripts and even uncompiled SASS and Coffeescript documents. Because of that, it’s more than a hassle to sort them out and edit links to match the correct file path of an individual asset. Even more so, when you’re working with a client and you’ve got to quickly convert your HTML files into PHP files (and this is where it becomes messy) just so you can preview them locally. Hammer for Mac 1.7 - Getting Started. What is Hammer? 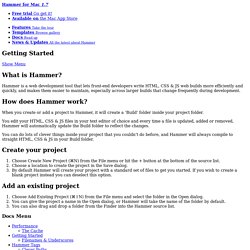 Hammer is a web development tool that lets front-end developers write HTML, CSS & JS web builds more efficiently and quickly, and makes them easier to maintain, especially across larger builds that change frequently during development. How does Hammer work? When you create or add a project to Hammer, it will create a ‘Build’ folder inside your project folder. You edit your HTML, CSS & JS files in your text editor of choice and every time a file is updated, added or removed, Hammer will automatically update the Build folder to reflect the changes.

You can do lots of clever things inside your project that you couldn’t do before, and Hammer will always compile to straight HTML, CSS & JS in your Build folder. Create your project Choose Create New Project (⌘N) from the File menu or hit the + button at the bottom of the source list. Add an existing project Choose Add Existing Project (⌘⇧N) from the File menu and select the folder in the Open dialog.