Chicago's vertical farm and food business incubator. GoSun Grill: A Breakthrough Solar Oven that Cooks at Night by Patrick Sherwin. Risks and challenges Timeline: We refuse to compromise on the quality of our products. 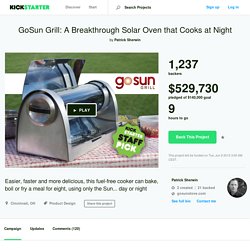 During the manufacturing process of the GoSun Sport in early 2014, we established an extensive quality assurance plan, which caught some mistakes, and in turn, delayed the fulfillment of our product for months. We’ve learned to be extremely accurate and completely transparent with our backers regarding the latest developments. Shipping: The GoGun Grill is going to need additional package design and engineering to ensure safe transport to your home. This is entirely GoSun's concern since you’re covered with a Two-Year No Questions Asked Warranty on the evacuated tube.

Battery Costs: We have not fully defined our costs on the Thermal Battery encapsulation vessel and production costs. Social Media Sharing: As a small start-up business, we depend heavily on the word-of-mouth and enthusiasm of our customers. Learn about accountability on Kickstarter. Amazon. Human-Powered Gyms: For Your Health—and the Earth's. As we desperately search for alternative energy resources, one market has managed to capitalize on perhaps the most available and efficient source of energy around—humans. 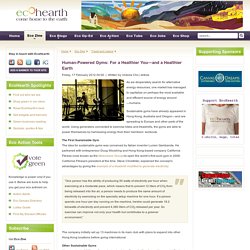 Sustainable gyms have already appeared in Hong Kong, Australia and Oregon—and are spreading to Europe and other parts of the world. Using generators connected to exercise bikes and treadmills, the gyms are able to power themselves by harnessing energy from their members’ workouts. The First Sustainable Gym The idea for sustainable gyms was conceived by Italian inventor Lucien Gambarota.

He partnered with entrepreneur Doug Woodring and Hong Kong-based company California Fitness (now known as the Motorwave Group) to open the world’s first such gym in 2008. California Fitness's president at the time, Steve Clinefelter, explained the concept’s advantages by giving the example of a treadmill modified to generate electricity:

Recipes. Oprah's Maui Farm Photos - Pictures of Oprah's Hawaii Land. Can Do—Even in a Condo: How to Go Solar. My husband and I never thought we could heat our Chicago condominium unit with solar energy—we don’t even own exclusive roof rights on our building. 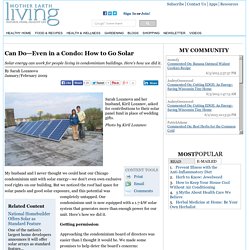 But we noticed the roof had space for solar panels and good solar exposure, and this potential was completely untapped. Our condominium unit is now equipped with a 1.7-kW solar system that generates more than enough power for our unit. Here’s how we did it. Getting permission Approaching the condominium board of directors was easier than I thought it would be. . ■ We wouldn't penetrate the roof membrane. . ■ All wiring runs down the back of the building and follows existing conduits whenever possible, so it doesn’t change the building exterior’s aesthetics. ■ Only the AC disconnect was mounted on the building exterior. System components The interior solar components had to feed into our electric panel, which is in our kitchen.

Ecomobile: A Green Mobile Home In A Spiritual Trailer Park. Images unless noted: Findhorn Foundation While following the development of small green prefabs, It has become increasingly clear that you cannot separate the home from the context, and that what we really need is a sort of green trailer park, where people can own their unit but share common resources. 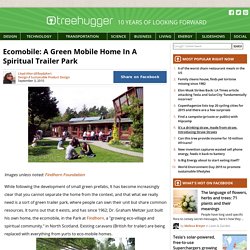 It turns out that it exists, and has since 1962; Dr. Graham Meltzer just built his own home, the ecomobile, in the Park at Findhorn, a "growing eco-village and spiritual community. " in North Scotland. Existing caravans (British for trailer) are being replaced with everything from yurts to eco-mobile homes. Image: The Blended Lifestyle Graham Meltzer's ecomobile is designed to legally be classed as a mobile home under the 1983 Mobile Homes Act; by doing so it comes under the existing zoning for the property and doesn't need new permissions. Among the virtues of the mobile home is a very light footprint, as it just has a couple of pads as foundations.

Click on plans to enlarge. A nonprofit organization to develop and teach sustainable ways to grow food. Solar-powered Ecocapsule lets you live off-the-grid anywhere in the world. Is your dream to live off-grid in any place of your choosing? 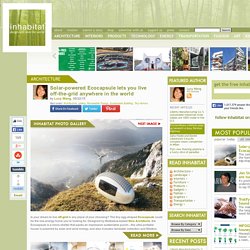 The tiny egg-shaped Ecocapsule could be the low-energy home you’re looking for. Designed by Bratislava-based Nice Architects, the Ecocapsule is a micro-shelter that packs an impressive sustainable punch—the ultra-portable house is powered by solar and wind energy, and also includes rainwater collection and filtration. The compact Ecocapsule fits all the home necessities within an egg-shaped space measuring 4.5 meters (14.6 feet) in length, 2.4 meters (7.9 feet) in width, and 2.5 meters in height (8.2 feet). The total usable floor space is eight square meters (86 square feet).

Despite its small footprint, the designers say the micro-shelter can comfortably fit two adults. A built-in 750W wind turbine and a 2.6-square-meter array of high-efficiency solar cells (600W output) power the Ecocapsule. Amazon.