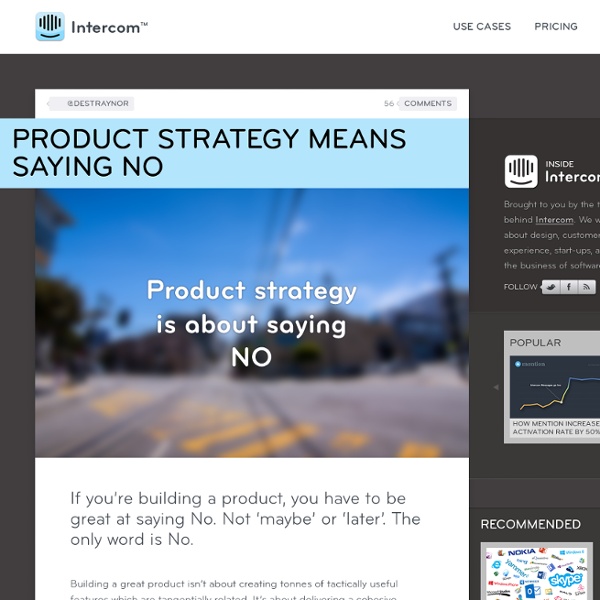 If you’re building a product, you have to be great at saying No. Not ‘maybe’ or ‘later’. The only word is No. Building a great product isn’t about creating tonnes of tactically useful features which are tangentially related. It’s about delivering a cohesive product with well defined parameters. As Apple’s latest advert points out, there are literally tens of thousands of permutations of your product based on every addition, both minor and major. So many reasons to say yes When your product gets traction, you’ll find yourself inundated with good ideas for features. But The Data Looks Good “We’ve tried this feature with a small group and engagement is off the charts.” But It’ll Only Take A Few Minutes The main problem with this argument is that the scope of work should never be a reason to include a feature in a product. Lots of bad ideas can be built quickly. But this customer is about to quit This is feature blackmail. But we can just make it optional This leads to death by preferences.

A Product Manager’s Musings A Product Manager’s Musings A Product Manager is a strange occupation in Silicon Valley. You’re the mini CEO. What Does Feature Creep Look Like? When you think about feature creep and bloated products what comes to mind? Endless tabs, toolbars, settings, and preferences, right? For a 5 year period you couldn’t sit through a UX talk without seeing some variation of this infamous Microsoft Word screenshot as example of the need for simplicity… Poor UI such as that above highlights the cost of feature creep.

Pearltrees: 3 years and €8.5 million later, there's finally talk of a business model In Europe, as many of you may already know, people tend to talk about business models much earlier in the game than they do in the US. In fact, it’s a widely-held belief that European investors don’t tend to invest in companies that aren’t generating cash (which many believe explains the French VCs’ love for e-commerce). While US companies like Instagram, Pinterest, Quora and the likes are busy amassing millions upon millions of non-paying users prior to even talking about their business models (oh wait, Pinterest actually does make money?), European companies are more often than not approaching things from the opposite end. In fact, it is so engrained into European startups’ brains to talk about business from the get-go that Ohai’s Susan Wu shocked the Paris tech scene at Le Camping’s Fest event last year when she told a startup that their business model wasn’t important at their current stage and they could worry about it later.

Designing products for single and multiplayer modes The first million people who bought VCRs bought them before there were any movies available to watch on them. They just wanted to “time shift” TV shows – what we use DVRs for today. Once there were millions of VCR owners it became worthwhile for Hollywood to start selling and renting movies to watch on them. Rarely say yes to feature requests - Inside Intercom Here’s a simple set of Yes/No questions that you can quickly answer before you add another item to your product roadmap. Saying yes to a feature request – whether it’s a to an existing customer, a product enquiry, a teammate, or a manager – is immediately rewarding. It’s an unspoken transaction where you barter long term product focus in exchange for short term satisfaction. Buying short term joy for the cost of long term pain is the human condition. Previously we’ve written about how product strategy means saying no, but a list of reasons to reject a feature isn’t as immediately useful as a test that any new feature must pass. Lots of our readers made that exact point to us too:

What Drives Consumer Adoption Of New Technologies? I'm participating in a panel discussion this morning during the offsite of a major media company. They sent me a list of questions in preparation of the event. One of the questions was the title of this post; "What drives consumer adoption of new technologies?". It's an interesting question and one I've never tried to answer directly in writing. But it's also a question we attempt to answer every day in our firm as we evaluate thousands of new startups every year. PAD_0 : PT pas content Connected. This pad seems to be opened in more than one browser window on this computer. Reconnect to use this window instead. Your permissions have changed while viewing this page. Try to reconnect.

Screw the Power Users I designed HomeSite and TopStyle for power users. Only power users would want to edit HTML & CSS by hand, so I made sure to cater to them. Those products were filled with features and tool buttons, and their settings dialogs contained dozens of geeky options. Customers liked them that way. I liked them that way, too. But then I made FeedDemon. PAD_2 suggestions PT2 Connected. This pad seems to be opened in more than one browser window on this computer. Reconnect to use this window instead. Your permissions have changed while viewing this page.

@ Aroman I was thinking to my proper thinking about "democratizing PT". It's maybe too radical. ^^ by alwen Jun 9

@aroman: Yeah, that's why we all do understand team team PT's decision to replace v1 by v2 without considering any user complaints. The second point is that PT's users might say "no" as well to PT's product stategy and use something else instead. by deuxpont Jun 8

"Lots of bad ideas can be built quickly. Don’t be seduced. There are no small changes. Also, even the tiniest additions add hidden complexity that isn’t accounted for in the “but it’s just 5 minutes” estimate." -this is a real good article by aroman Jun 8

Oh I guess I have understand what is "democratize" then for PT, essentialy lower-leveled. Make branchs require some sapiens / some intelligence and usual users don't need them ? It's not a great idea, I agree ! :/ by alwen Jun 8

Nice POV, I agree with you. Thank you for that summary. by pascalwicht Jun 8

I found this pearl in the collection of two important members of the Pearltrees' management. I guess this article explains the behavior of Pearltrees' community management and the managers: (1) You have to say "no" (2) No customer can be more important than a good product. (3) The try to associate v1 with v2 leads to death by preferences. So, guys. don't get no false expectations about agreements and compromises with team team Pearltrees: There's no use in playing for time. Either you have to admit that Pearltrees' rudimentary v2 abilities still are powerful enough to use them or you should move your stuff to a good mind managing app asap. by deuxpont Jun 8