Gululu, The Interactive Water Bottle. Not-a-Cat Cat. Hatchimals - Who will you hatch? How To Play With Your Hatchimals. The Beebo - A better way to bottlefeed. Popupplaytoy. A vibrating mat for soothing crying and colicky babies. Collections – Toymail. The Smart Changing Pad. Welcome to AltSchool. Buzzy® Helps. 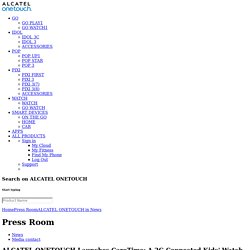 “Connected objects are part of the daily experience of young children today, so CareTime can fit in easily with their needs and parents’ needs,” said Vittorio Di Mauro, General Manager of Smart Connectivity at ALCATEL ONETOUCH. Simple Enough for a Child to Use Designed for children from 5 to 9 years old, the CareTime 2G connected watch allows parents to call or send voice messages to their kids. Using the simple user interface, children can reply to calls from up to 10 pre-set contacts and make calls to 5 registered numbers. The Smart Changing Pad. Prima-Temp. Owlet Vitals Monitor. MonBaby a Smart Breathing Movement Monitor for Babies with Mobile App. The hereO Family. Sproutling Baby Monitor. Child Locator Device, Kids Tracking Watch. Milk Nanny, The World's first Smart Home Baby Formula Milk Maker. Box of OMG! Box of Awesome! Box Of Awesome, The ‘Free Birchbox For Kids’, Targets Girls With Box Of OMG! Having proven the concept, Dylan Collins’ Box Of Awesome, which we previously described as a “free Birchbox for kids“, is launching a new box targeting 8-14 year-old girls only — a move that feels like a very logical next step. 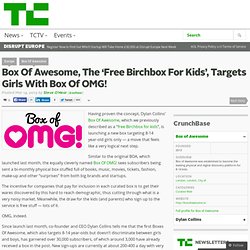 Similar to the original BOA, which launched last month, the equally cleverly named Box Of OMG! Sees subscribers being sent a bi-monthly physical box stuffed full of books, music, movies, tickets, fashion, make-up and other “surprises” from both big brands and startups. The incentive for companies that pay for inclusion in each curated box is to get their wares discovered by this hard to reach demographic, thus cutting through what is a very noisy market.

Meanwhile, the draw for the kids (and parents) who sign up to the service is free stuff — lots of it. OMG, indeed. In fact, managing demand has been one of the biggest challenges. “We introduced the concept of a paid subscription/guaranteed box for kids to relieve this pressure a little,” say Collins. TuTu: iPhone-powered stuffed animal combining apps and toys. by Jason Warren. Imagine a world where bunnies talk, the sun is always smiling, and teddy bears are made of stars. 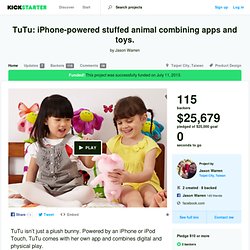 This is the land of Roam & Wander, a world of the fantastic and wonderful, where daydreams spring to life and imaginations run free. Meet TuTu, a pink, plush bunny rabbit meant to inspire your child to creativity and wonder. We had the initial ideas to "bring toys to life through apps" in 2010-2011, and the concepts for how to bring TuTu to life began to come together in the summer and fall of 2012 as we were getting ready to publish Sticker Games - our first major game, where TuTu made her first appearance. We're excited to reintroduce TuTu as a real-life, iPhone or iPod Touch-enabled toy, creating new and exciting experiences for children at play and bringing apps and toys together—fostering play with purpose.

Play is important—especially for kids At Roam & Wander, we believe in play with purpose. TuTu inspires real life play, the kind that unleashes a lifetime of imagination for your child. Roam & Wander: Get Tutu Today! By Wrapping Sensors In A Plushie, “Teddy The Guardian” Aims To Sell Medical Tech For Kids. In only a few months, the founders of IDerma, a medical technology start-up based out of Zagreb, Croatia, have developed and launched what they’re marketing as medical sensor technology for children. 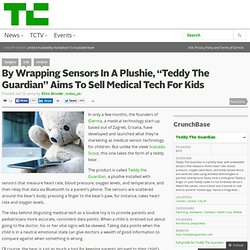 But unlike the sleek Scanadu Scout, this one takes the form of a teddy bear. The product is called Teddy the Guardian, a plushie installed with sensors that measure heart rate, blood pressure, oxygen levels, and temperature, and then relay that data via Bluetooth to a parent’s phone. The sensors are scattered around the bear’s body; pressing a finger to the bear’s paw, for instance, takes heart rate and oxygen levels. The idea behind disguising medical tech as a lovable toy is to provide parents and pediatricians more accurate, consistent data points. When a child is stressed out about going to the doctor, his or her vital signs will be skewed. Of course, the bear is just as much a tool for keeping parents attuned to their child’s general well-being as it is a medical device. Teddy The Guardian. The Wireless iPhone Baby Breathing Monitor. Sproutling - Grow Happy Families. SEP Solutions. The Wireless iPhone Baby Breathing Monitor.