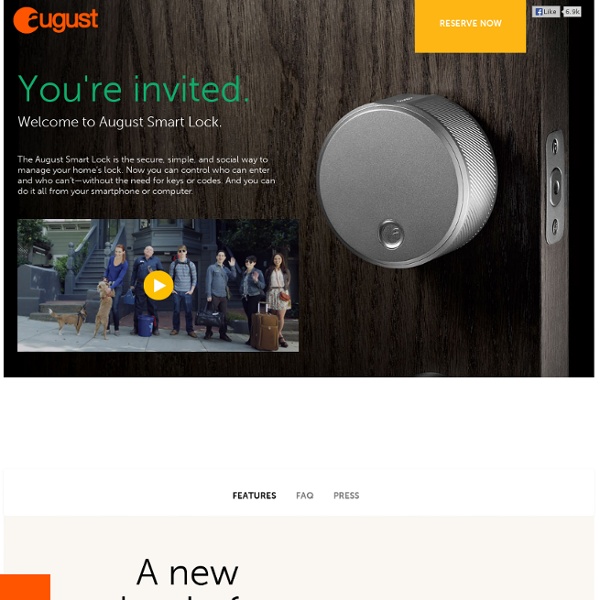 Design Enjoy beautiful, discreet design with an intuitive interface. Durable anodized aluminum, a clever use of LEDs and your choice of color and finish make August both elegant and discreet. Bluetooth August works independently of your home internet service. Reliable Bluetooth technology syncs your phone directly with your August lock.

The Double Robotics iPad-Equipped Teleconferencing Robot Is Shipping It’s impossible to be in two places at once. But Double Robotics, a wheel-equipped robot with an iPad for a face, has finally made that possible. The company has begun shipping units of the Double to customers who pre-ordered and coughed up the $2,000 to get one. In fact, the first hundred are already safely in the homes and lives of their new owners. Goji Smart Lock At Goji, we have developed a technologically advanced, beautifully designed smart lock that gives you complete control over access to your home using your mobile phone. Our Goji Smart Lock is distinguished by its sleek, sophisticated design and its unique ability to send you real-time picture alerts via text or email of the individuals accessing your home. The Goji Smart Lock presents a contemporary new look for a deadbolt lock: a sleek, modern disc in brushed metal with a subtle blue-text LED display that welcomes users by name when the lock is activated. The display also shows the lock/unlock status, and dates and times of all entries and exits. Its elegant simplicity fits with any home décor. The Goji Smart Lock is UL listed.

Smoke Detectors The NFPA (National Fire Protection Agency) recommend that every home have a smoke detector outside each sleeping area (inside as well if household members sleep with the door closed) and on every level of the home, including basements. Floors without bedrooms should have detectors in or near living areas, such as dens, living rooms or family rooms. TIP: Even though we may believe the kitchen and bathrooms should have detectors, in fact these rooms can be a source of numerous false alarms. Depending on the age of the house, smoke alarms may have been installed as part of a security system, or they may be stand-alone. StickNFind - Home of the StickNFind, StickNFind Pro, and MeterPlug Discover How Beacons Deliver Innovation by adding new and simple contextually aware beacons to your retail store solutions and enterprise applications Drive Marketing Campaigns in New Ways

Brominated Fire Retardants by Nick Gromicko Brominated flame or fire retardants (BFRs) include a wide range of chemicals added to household furnishings and products to inhibit their ignition and reduce the chance of fire. In recent years, concern surrounding the toxicity of this class of chemicals has risen due to the widespread accumulation of several types of BFRs in humans and in the natural environment. There are more than 175 different types of flame retardants, which are generally divided into classes that include brominated, chlorinated, phosphorus-containing, nitrogen-containing, and inorganic flame retardants. Producing BFRs, at a rate of 5 million metric tons annually, is a $2 billion business, and this particular arm of consumer fire safety is currently the industry leader.

Audioair Wants To Unlock Audio From Muted TVs Everywhere And Give Your Local Bar A New Way To Advertise If you’ve ever been in a sports bar with your friends to watch a big game, you’ve likely run into the “muting” problem. While the bar may have two dozen TVs, each might be playing a different game, and there’s either too much sound or none at all. At most local restaurants, bars, airports and health clubs, you’ll find TVs muted for this very reason. Some have opted to, say, put speakers on tables in their bars to project sound more directly, but the problem is that this puts a damper on any socializing you planned to do with your friends and fellow bar mates. Might just be me, but repeatedly yelling “WHAT DID YOU SAY?!” over the audio can detract from the viewing experience.

How Smart Homes Work" When you're not home, nagging little doubts can start to crowd your mind. Did I turn the coffee maker off? Did I set the security alarm? HAPI.com : Enjoy Your Food with HAPIfork by Jacques L&eacute;pine Eating too fast leads to poor digestion and poor weight control. The HAPIfork, powered by Slow Control, is an electronic fork that helps you monitor and track your eating habits. It also alerts you with the help of indicator lights and gentle vibrations when you are eating too fast.