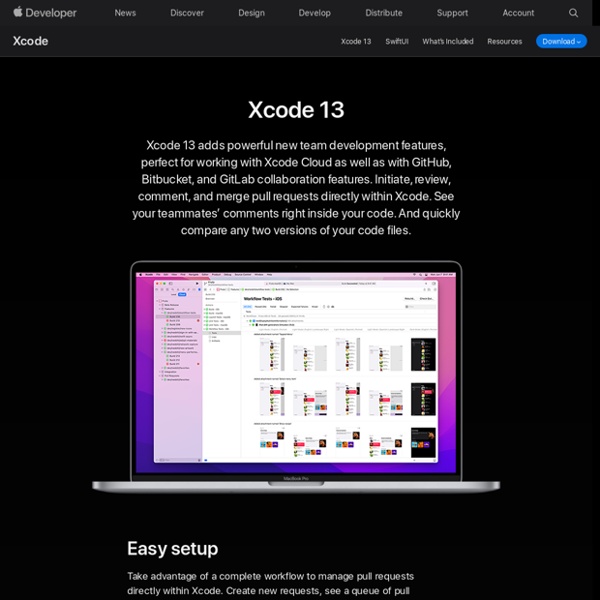 Playgrounds Playgrounds have been thoroughly updated so you can author gorgeous documentation, easy to follow experiments, and interactive educational content. You can add playgrounds to your project that show how to use your own APIs, demonstrate how you solved a problem, or even demo your code’s features. Code comments are static in comparison. New playground features include: Results are displayed in-line beside the code that generated them. Interface Builder Interface Builder gives you incredible control over the latest features in iOS, OS X, watchOS, and tvOS. Testing Xcode is already an amazing environment for test driven development, and Xcode 7 makes it even better with user interface testing and code coverage. User Interface Testing Xcode 7 introduces user interface testing, ensuring that changes you make in code don’t show up as unwanted changes to your users. Code Coverage

Android Studio Before downloading, you must agree to the following terms and conditions. This is the Android Software Development Kit License Agreement 1. Installing Python on Mac OS X The latest version of Mac OS X, El Capitan, comes with Python 2.7 out of the box. You do not need to install or configure anything else to use Python. Having said that, I would strongly recommend that you install the tools and libraries described in the next section before you start building Python applications for real-world use. In particular, you should always install Setuptools, as it makes it much easier for you to use other third-party Python libraries. The version of Python that ships with OS X is great for learning but it’s not good for development.

Installing / Updating Python on OS X While Python comes pre-installed on OS X, Apple doesn’t do a good job on keeping the Python runtime environment up to date. Currently, on Mac OS X 10.7.4 “Lion”, entering python -V returns Python 2.7.1. Even worse, Mac OS X 10.6 “Snow Leopard” is still on a Python 2.6 release. While the latest Python releases are always available on updating a Mac isn’t a simple, straight forward process. BASIC-256 Introduction BASIC-256 is an easy to use version of BASIC designed to teach anybody (especially middle and high-school students) the basics of computer programming. It uses traditional control structures like gosub, for/next, and goto, which helps kids easily see how program flow-control works. It has a built-in graphics mode which lets them draw pictures on screen in minutes, and a set of detailed, easy-to-follow tutorials that introduce programming concepts through fun exercises.

maXbox maXbox Starter and maXbox Starter 2 and StartScript for Linux maXbox is license free, and a self contained ready to run scripting machine. The App is "out of the box" and needs no installation or registration. A prebuild (Subset) has a large CodeBase of Industry, Education and Research. Precompiled Object Based Scripting Tool maXbox is a free scripter tool with an inbuilt delphi engine in one exe! Cppcheck Portable C/C++ analysis tool Cppcheck is an analysis tool for C/C++ code. Unlike C/C++ compilers and many other analysis tools, we don't detect syntax errors. Cppcheck only detects the types of bugs that the compilers normally fail to detect. Version 1.75 for Windows, Multilingual 7MB download / 12MB installed (Details)

Free HTML Editor Download any website from the server using the Open From Web option 21 Days Drag-n-drop to add structured data with our Schema Resource Tab HTML and CSS Validation tools to keep your pages compliant Geany Portable text editor and basic IDE Geany Portable is cross-platform, GTK based Integrated Development Platform. You can work on simple text files, html, perl, python, NSIS and more with Geany. By using Geany Portable's built path-additions support, you can even configure Geany Portable so that Geany can use the compilers located locally on your flash drive. Bundled with a PortableApps.com Launcher as a portable app, you can take Geany with you. Version 1.28 for Windows, Multilingual 12MB download / 62MB installed (Details)

BowPad BowPad BowPad is a small and fast text editor with a ribbon user interface and syntax highlighting. A few notable features of BowPad: syntax highlighting for over 100 file types and languageshandling of many different encodings, including UTF-8, UTF-16 and even UTF-32easy ribbon user interfacenavigation hints in the vertical scrollbarcoloring of open tabs according to their pathextendable with plugins written in JScript or VBScript Kodable Kodable – Programming Curriculum for ElementaryThis award winning game and accompanying curriculum, is designed to teach the basics of computer coding to kids 5 and up. The furry aliens, known as Fuzzes were exploring space when their ship unexpectedly crashed on the maze-covered planet Smeeborg. The naturally curious fuzzes need kids to program them to explore all the colorful Technomazes on the planet’s surface. ----Coding basics for kids----Kids learn the fundamentals of every modern programming language in a fun and inviting way. Kids Learn:Sequence/ Order of operationsAlgorithmic operationsConditional logic statementsProblem solving skillsHigher level thinking skillsCollaboration skillsCommunication skillsCritical thinking skills