Alternate Layouts in Adobe InDesign - Liquid Layout. Many documents created today need to be re-purposed for use in different ways. 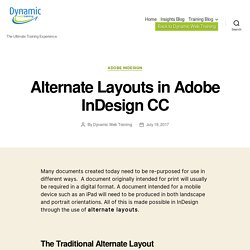 A document originally intended for print will usually be required in a digital format. A document intended for a mobile device such as an iPad will need to be produced in both landscape and portrait orientations. All of this is made possible in InDesign through the use of alternate layouts. The Traditional Alternate Layout The need to create alternate layouts for a document is not an issue that only affects digital documents.

In the past designers achieved this by creating the main document, then using File and Save commands to create duplicate copies. While there is nothing wrong with this approach, it is time consuming. InDesign’s Alternate Layout Concept In Adobe InDesign an alternate layout is actually created within the original document. The need for this has become necessary through the fact that documents are now created for multiple platforms. Liquid Layout – The Key to Successful Alternate Layouts. InDesign Scripts by Keith Gilbert. I provide custom script development for Adobe InDesign. 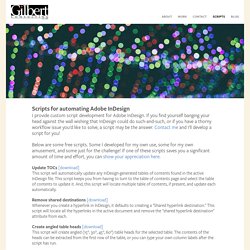 If you find yourself banging your head against the wall wishing that InDesign could do such-and-such, or if you have a thorny workflow issue you'd like to solve, a script may be the answer. Indesign Tutorial - How to Export Indesign file into HTML (Read the description please) Exporting from InDesign to HTML5: Amazing Free Script. Oh, if I only had a dollar for each time someone asked me: How do I export my InDesign document as HTML, keeping the page geometry (how the page looks), animations, interactive features, and everything! 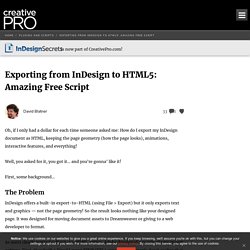 Well, you asked for it, you got it… and you’re gonna’ like it! First, some background… The Problem InDesign offers a built-in export-to-HTML (using File > Export) but it only exports text and graphics — not the page geometry! So the result looks nothing like your designed page. As users clearly wanted a direct-to-HTML option, Adobe developed a couple of new export options. More after the jump! Free and Premium members see fewer ads! Then Adobe created a tool called Publish Online. Third Party Solutions A few years ago, Justin Putney of Ajar Productions developed an InDesign plug-in called in5 which exports HTML5 from InDesign, with not just page geometry, but interactive elements, and far more. Diseños flotantes y alternativos de InDesign. 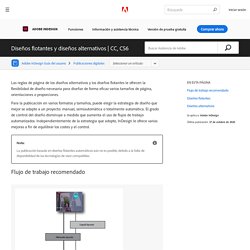 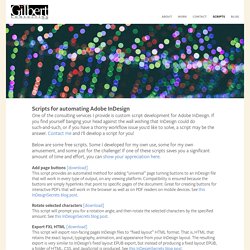 If you find yourself banging your head against the wall wishing that InDesign could do such-and-such, or if you have a thorny workflow issue you'd like to solve, a script may be the answer. Contact me and I'll develop a script for you! Below are some free scripts. Some I developed for my own use, some for my own amusement, and some just for the challenge! If one of these scripts saves you a significant amount of time and effort, you can show your appreciation here. Add page buttons [download] This script provides an automated method for adding “universal” page turning buttons to an InDesign file that will work in every type of output, on any viewing platform. Rotate selected characters [download] This script will prompt you for a rotation angle, and then rotate the selected characters by the specified amount. Export FXL HTML [download] Setup [download] Export JPG [download]

Interactive Shortcuts Guide for Adobe® InDesign® CS5 [by Marijan Tompa (tomaxxi)] The InDesigner. InDesign. InDesignSecrets. InDesign Scripts. By sselberg March 12, 2006 164,661 Downloads ** Note ** The Adobe Exchange has been very slow to allow me to publish updates to the zip file. 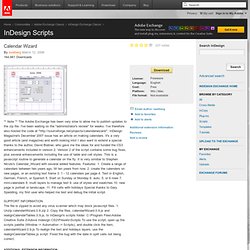 I've been waiting on the "administrator's review" for weeks. I've therefore also hosted the code at " InDesign Magazine's December 2007 issue has an article on making calendars. It's a very good article (and magazine) and worth looking into! I also want to extend a special thanks to the author, David Blatner, who gave me the ideas for and funded the CS3 enhancements included in version 2. SUPPORT INFORMATION The file is zipped to avoid any virus scanner which may block javascript files. 1. Additional extension information Reviews Haronf 16-Jan-13 Rating = 5 This is a brilliant product, a bit daunting to use at first with the interface but there is a clear walkthrough on his website that allows you to learn the functions quickly and efficiently!