How to Structure A Story: The Eight-Point Arc 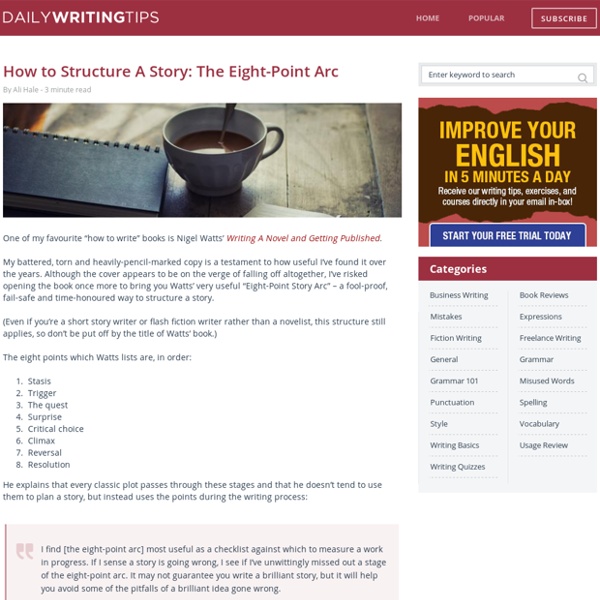 By Ali Hale - 3 minute read One of my favourite “how to write” books is Nigel Watts’ Writing A Novel and Getting Published. My battered, torn and heavily-pencil-marked copy is a testament to how useful I’ve found it over the years. (Even if you’re a short story writer or flash fiction writer rather than a novelist, this structure still applies, so don’t be put off by the title of Watts’ book.) The eight points which Watts lists are, in order: StasisTriggerThe questSurpriseCritical choiceClimaxReversalResolution He explains that every classic plot passes through these stages and that he doesn’t tend to use them to plan a story, but instead uses the points during the writing process: I find [the eight-point arc] most useful as a checklist against which to measure a work in progress. So, what do the eight points mean? Stasis This is the “every day life” in which the story is set. Trigger Something beyond the control of the protagonist (hero/heroine) is the trigger which sparks off the story.

13 Vital Reminders For Writers Writing is tough work. If I may be so bold as to attempt a simile, I’d say that it’s like walking through a dark forest, but with your legs tied together. So in actuality you’re not really walking at all. But sort of hopping. Oh yes, and there’s a little devil perched upon your shoulder whispering sweet doubts in your ear. To battle this devil, here are 13 punchy quotes that will help you remain focused as you hop through that dark forest. Guide for Writers: French Phrases When you want a character to sound pretentious, nothing beats a nice turn of French. Somehow, American writers (and readers) associate all things French with money, pretense, and culture. It’s quite the mix of responses, a “love-hate” relationship with France. If you want a character with class, or one completely without class, French is a wonderful tool. affaire de coeur - love affair au contraire - to the contrary au fait - possessing practical knowledge of a thing au revoir - until we meet again autre temps, autres moeurs - other times, other customs avec plaisir - with pleasure bête noire - a thing especially disliked bon jour - good day; hello bon soir - goodnight bourgeoisie - middle-class, materialistic c’est-à-dire - that is to say c’est la vie - such is life chacun à son goût - each to his own taste coup de grâce - death blow coûte que coûte - cost what it cost dégagé - without emotional links de trop - too much or too many dernier ressort - last option Dieu avec nous - God is with us

CALLIHOO Writing Helps--Feelings Table Character Feelings You can describe your character's feelings in more exact terms than just "happy" or "sad." Check these lists for the exact nuance to describe your character's intensity of feelings. SF Characters | SF Items | SF Descriptors | SF Places | SF EventsSF Jobs/Occupations | Random Emotions | Emotions List | Intensity of Feelings Learn How to Write Songs Kurt Vonnegut -- troubling.info Eight rules for writing fiction: 1. Use the time of a total stranger in such a way that he or she will not feel the time was wasted. 2. Give the reader at least one character he or she can root for. 3. 4. 5. 6. 7. 8. -- Vonnegut, Kurt Vonnegut, Bagombo Snuff Box: Uncollected Short Fiction (New York: G.P. Kurt Vonnegut: How to Write with Style

Novni How to Write a Book In Your Spare Time Many people say they would like to write a book. That statement is usually in the form of “I have this great book idea”, “I’ve always wanted to write a novel” or “I will write it when I have more time.” I used to say things like that. I kept promising myself that I would write a book someday. There are seven days in a week, but someday isn’t one of them. Do It Now I’ve had several friends who have told me they want to write a novel. The best advice I ever got from another writer was this: put your butt in the chair. Stephen King said, “The scariest moment is just before you start.” Making yourself sit down and start typing is something I fight with daily, even after having written two full-length novels. Just put your butt in the chair and start working. Finding Time The most common excuse I hear is “I don’t have time.” I wrote my first two novels by finding fifteen minutes, three times each day. In the morning, I woke up fifteen minutes early. Eventually, you will get used to it. Go img

100 Exquisite Adjectives By Mark Nichol Adjectives — descriptive words that modify nouns — often come under fire for their cluttering quality, but often it’s quality, not quantity, that is the issue. Plenty of tired adjectives are available to spoil a good sentence, but when you find just the right word for the job, enrichment ensues. Subscribe to Receive our Articles and Exercises via Email You will improve your English in only 5 minutes per day, guaranteed! 21 Responses to “100 Exquisite Adjectives” Rebecca Fantastic list! 25 Ways To Fuck With Your Characters As storyteller, you are god. And to be frank, you’re not a particularly nice god — at least, not if you want your story to resonate with readers. A good storyteller is a crass and callous deity who treats the characters under his watchful eye like a series of troubled butt-puppets. Put differently, as a storyteller it’s your job to be a dick. It’s your job to fuck endlessly with the characters twisting beneath your thumb. And here’s 25 ways for you to do just that. 1. Gods have avatars, mortal or semi-mortal beings that exist on earth to embody the deity’s agenda. 2. The audience and the character must know the stakes on the table — “If you don’t win this poker game, your grandmother will lose her beloved pet orangutan, Orange Julius.” 3. Impossible odds are a powerful way to fuck with a character. 4. Drop the character smack dab between two diametrically opposed choices. 5. Give the character an untenable secret life: a forbidden romance, a taboo, a transgression. 6. This one? 7. 8. 9.

How to Find Unique Names for Your Characters Steps Method 1 of 2: Finding Your Own Unique Names 1Use a first name as a last name. Since first and last names usually sound very different, breaking this tradition would make your character stand ever so slightly apart. (Ex. Anna Joey, Robert Gideon.) 8Look up names. Method 2 of 2: Starting with a Letter (or Letters) You Like 1List letters that you must/want to have in the name. 4Add a few more letters. Tips Don't make too many different or strangely spelled names or your readers could end up confused and have less motivation to finish the story.Make sure it's pronounceable. Ad Warnings Don't name your character after somebody who's already been invented, particularly if they have a similar personality.

Useful references for writers - WestSuburbanWriters Because there are HUGE misunderstandings about what a copyright is these days and I keep seeing them repeated over and over again. I thought I could help. There's a good start. So, yes fan fiction is a violation of copyright. Copyrights are made as soon as you make them into apparent form. This post will be invalid in its copyright after I'm dead for EIGHTY years. Also another thing to know is that an official copyright is EXPENSIVE, which is why most publishers will do it for you. Copyright info and Electronic publishing info from the Science Fiction Writers of America.