No to NoUI – Timo Arnall 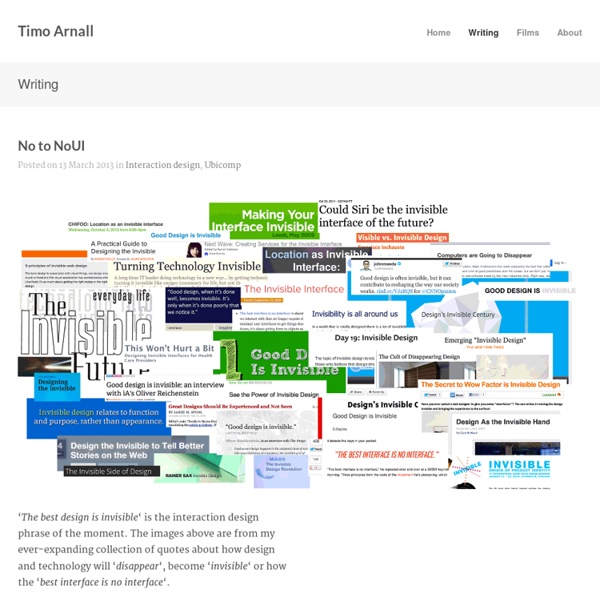 ‘The best design is invisible‘ is the interaction design phrase of the moment. The images above are from my ever-expanding collection of quotes about how design and technology will ‘disappear‘, become ‘invisible‘ or how the ‘best interface is no interface‘. The Verge has recently given both Oliver Reichenstein and Golden Krishna a platform to talk about this. I agree with some of the reasons driving this movement; that design’s current infatuation with touchscreens is really problematic. But I also take issue with much of the thinking for a few reasons that I’ll outline below. 1. We already have plenty of thinking that celebrates the invisibility and seamlessness of technology. Computing systems are suffused through and through with the constraints of their materiality. – Jean-François Blanchette As systems increasingly record our personal activity and data, invisibility is exactly the wrong model. 2. Invisible design leads us towards the horrors of Reality Clippy. 3. 4. Related:  Design for IoT

Branded Interactions | Matthew Moore Design One or two key functions. Well designed apps master their core interactions. The best are unique and become associated with the brand itself. You could even call them branded interactions. Clear Clear‘s primary interactions are adding and clearing to-do items. Mailbox Mailbox is the newest hyped mail client for iOS. Swiping right shows a green color with a check mark, which lets you archive the message. This is the big innovation of Mailbox: they’ve made it fun to sort your messages in four ways with a swipe and get down to inbox zero. Sunrise Sunrise is a calendar app combining your Google Calendar and Facebook events with daily info like birthdays and weather. Scrolling into the future through the agenda, you run into the problem of how you get back to ‘today’. Vine Video has always been a pain to create on smartphones. Based on the number of Vine videos showing up on Twitter, it seems they’ve solved this challenge. Path Path is for sharing your life with the people closest to you. Google+

8 Insights About The Coming Era Of Interactive Design It’s all moving so quickly. Just yesterday, we were amazed by the miracle of making calls from our cars. Now we’re furious when our 4G cuts out while streaming an HD video on a four-inch touch screen, just because we’re 50 feet underground riding the subway. Connecting is a short documentary by Bassett & Partners and Microsoft that explores how our lives (and our gadgets) have and will change in a more connected world. As you watch, you’ll see a general consensus on a few really important points. Our phones demand too much attention, detracting from our real experiences. When you mix all of these ideas into a blender, you definitely spot some dichotomies--how can we pull our attention from our phones when the Internet is a superorganism of all mankind’s thought? But that doesn’t make any of the ideas wrong. [Hat tip: The Creators Project]

Design and the Coming Iceberg By Mark Rolston - September 9, 2013 I am a product designer. I have been part of frog for nearly 20 years. In that time I have seen our industry change quite a bit—yet it is nothing like the changes I see coming. Our industry will have a choice to make: either change radically, or be relegated to decorating the surfaces of the world. Our challenge begins with our history. The first wave: Experience Design. The modern design challenge is to define a great experience for a consumer that is composed of a range of touch points, in various cases composed of interactions with several devices, retail experiences, personal contact points, software interfaces, physical mechanisms, data, and software intelligence. The second wave: The Iceberg. The third wave: Organic Products. There is a twist to these trends. We have to be prepared to recognize these trends as they evolve. “Design is how it works.” Design must grow and evolve.

Building iPhone apps for the ‘Internet of Things’? Here’s how to get prepared What exactly is the “Internet of Things”? It’s a popular phrase used to describe a category of physical devices like home-monitoring devices, lamps, watches and cars that now connect to PCs, tablets, and smartphones. It’s become so ubiquitous, that people sometimes refer to it as the “Internet of Everything.” You may have seen some examples in the Apple Store, or mentioned on technology websites, but few have explained how to build your own app for IoT. Home automation apps, such as Belkin’s WeMo Switch, or products sold on SmartThings, communicate with door locks or light switches to control your apartment or home from anywhere on a WiFi network. Entering the connected device space can seem like an attractive pursuit for a budding entrepreneur, but unless you have a background in electrical engineering, it may also be a daunting endeavor. Ryan Matzner is the Director of Strategy at Fueled, a development agency in New York City and London that builds mobile apps and web products.

Design's Next Big Frontier? Shaping Behavior In Real Time Other than Michael Bay's already legendary meltdown, the hottest topics of discussion at this year's Consumer Electronics Show are largely wearable and connected. In part, this is just an outcome of consumer expectations: a wearable device is the next step smaller than a smartphone, and we now have the tiny technology to make it work. But after a long morning examining smart bracelets, smart watches, smart headgear, and smart sporting goods on the CES show floor, it’s clear that there’s a much deeper potential hidden in the cracks. This is because small devices with embedded intelligence can do more than just measure; they’re showing their potential to change the way we act. The idea of using technology to change behavior is something we've been hearing about for a few years now, in articles talking about the surprising effectiveness of "Your Speed" radar boxes on the side of the road, or the subtle tricks video games and social networking sites use to encourage certain actions.

An Easy Internet of Things Interface With the advent of the Internet of things, potentially billions of devices will report data about themselves, making it possible to create new applications in areas as diverse as factory optimization, car maintenance, or simply keeping track of your stuff online. But doing this today requires at least some degree of programming knowledge. Now Bug Labs, a New York City company, is trying to make it as easy to create an Internet of things application as it is to put a file into Dropbox. With a new service called Freeboard, Bug Labs is giving people a simple one-click way to publish data from a “thing” to its own Web page (Bug Labs calls this “dweeting”). Freeboard, expected to be launched Tuesday, makes sense of such streams of data. Freeboard is not the most technically sophisticated Internet of things application platform. Prasad showed how Freeboard could quickly unlock the value of vehicle-generated data.

Slides for “Designing for the Internet of Things” at HOW Design Live 2014 By David Sherwin - May 14, 2014 Off the Page Into the Wild: Designing For the Internet of Things from frog We no longer live in a disconnected world. Ubiquitous, flexible communication has become the norm. At this year’s HOW Design Live, I was able share some of the tools we use to create design solutions for connected devices, in collaboration with Jennifer Dunnam, a senior interaction designer from our New York studio. In our talk, we underscored that the most valuable aspect of the IoT is the human element. For Wearable Tech Brands, a Lesson from EVs in Drive to Mass Adoption The discontinuation of Nike’s FuelBand hardware has posed new questions to the emerging category of wearable tech and how to make it a mass-market success. A hint was given by the recent Nielsen Connected Life report that explored the appeal of wearable tech among early adopters. According to the wearable tech users surveyed by Nielsen, the consumption of “wearable screens” is mainly driven by the desire to supplement their smartphone addiction and their self-monitoring ability. The same report also revealed the preferred features of respondents: functionality (81%), comfort (79%), accuracy (70%), battery life (64%), and durability (82% smartwatch and 63% fitness band owners). With the exception of comfort, however, utilitarianism does not favor brand loyalty. For mass-consumer goods, performance and cost are still crucial, but consumers are mainly favoring brands that reinforce a desired sense of identity. Dr.

Designing for Wearable Technology — User Experience Research Wearable technology is more than just crap on your wrist, and more than the typical rectangular screen. We are obsessed with the visual, but wearable technology is so much more than what you see. How do we design these objects, challenging the norms while still keeping the end user in mind? We’re starting to mash up user experience and industrial design to create new skill sets for this booming tech movement. So what are you talking about? How are we supposed to take what we know from websites and mobile apps and apply it to wearables? Close your eyes with your phone in your hand. What can you still do with your mobile device now that your vision is gone? You can talk to Siri, or maybe you can feel the vibrations of incoming messages. What is Wearable Tech? We know that strapping an iPhone to your wrist does not make it wearable technology. It’s not bad design, it’s just boring design. Designing Without the Visual Agreed Meanings Let’s try out an example of designing for wearables.