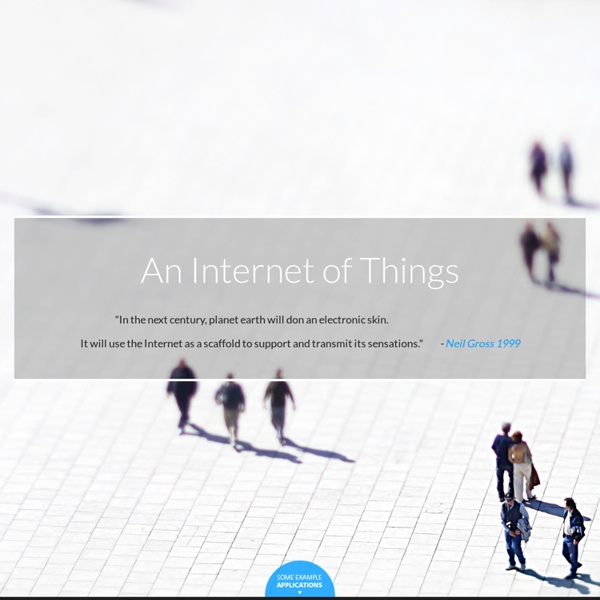 Check on the baby Aimed at helping to prevent SIDS, the Mimo monitor is a new kind of infant monitor that provides parents with real-time information about their baby's breathing, skin temperature, body position, and activity level on their smartphones. // Visit Remember to take your meds GlowCaps fit prescription bottles and via a wireless chip provide services that help people stick with their prescription regimen; from reminder messages, all the way to refill and doctor coordination. // Visit Track your activity levels Using your smartphone's range of sensors (Accelerometer, Gyro, Video, Proximity, Compass, GPS, etc) and connectivity options (Cell, WiFi, Bluetooth, NFC, etc) you have a well equipped Internet of Things device in your pocket that can automatically monitor your movements, location, and workouts throughout the day. Get the most out of your medication Monitor an aging family member Stay out of the doctor's office Related:  Internet of Things (IoT) • Internet of things

Internet of Things - Privacy and Security in a Connected World | Federal Trade Commission The Federal Trade Commission held a public workshop to explore consumer privacy and security issues posed by the growing connectivity of devices. The ability of everyday devices to communicate with each other and with people is becoming more prevalent and often is referred to as “The Internet of Things.” Connected devices can communicate with consumers, transmit data back to companies, and compile data for third parties such as researchers, health care providers, or even other consumers, who can measure how their product usage compares with that of their neighbors. The workshop brought together academics, business and industry representatives, and consumer advocacy groups to explore the security and privacy issues in this changing world. The workshop served to inform the Commission about the developments in this area. The workshop was held at the FTC’s satellite building conference center, located at 601 New Jersey Avenue, N.W., Washington, DC, and was free and open to the public.

2015-03-31 IBM Connects “Internet of Things” to the Enterprise ARMONK, NY - 31 Mar 2015: IBM (NYSE: IBM) today announced that it will invest $3 billion over the next four years to establish a new Internet of Things (IoT) unit, and that it is building a cloud-based open platform designed to help clients and ecosystem partners build IoT solutions. IBM’s pioneering work in Smarter Planet and Smarter Cities was based on practical applications of IoT in the enterprise and led to a broad set of solutions, ranging from water management to optimizing retail and customer loyalty to alleviating traffic congestion. IBM leads in enterprise IoT implementations that securely combine and analyze data from a wide variety of sources. With new industry-specific cloud data services and developer tools, IBM will build on that expertise to help clients and partners integrate data from an unprecedented number of IoT and traditional sources. The new unit will be led by Pat Toole as General Manager. Join the conversation #IoT Smarter Cities Smarter Buildings Smarter Water

What is Internet of Things (IoT)? - Definition from WhatIs.com The Internet of Things (IoT) is an environment in which objects, animals or people are provided with unique identifiers and the ability to transfer data over a network without requiring human-to-human or human-to-computer interaction. IoT has evolved from the convergence of wireless technologies, micro-electromechanical systems (MEMS) and the Internet. The concept may also be referred to as the Internet of Everything. In this Insider guide, InfoSec pros will learn about the risks related to the IoT and what they can do to mitigate them. A thing, in the Internet of Things, can be a person with a heart monitor implant, a farm animal with a biochip transponder, an automobile that has built-in sensors to alert the driver when tire pressure is low -- or any other natural or man-made object that can be assigned an IP address and provided with the ability to transfer data over a network. IPv6’s huge increase in address space is an important factor in the development of the Internet of Things.

We are building a UK network dedicated to the Internet of Things - Arqiva We are building and running a national Internet of Things (IoT) network, starting with 10 of the UK’s largest cities. To enable this we have partnered with SIGFOX, a pioneer in cost-effective, energy-efficient Internet of Things (IoT) connectivity.The new network, which will use SIGFOX technology and connect the UK to the SIGFOX global IoT network, will unlock substantial economic benefits and support innovative new services for smarter homes and cities. SIGFOX’s ultra-narrowband technology is particularly suited to connecting objects over long distances where a long battery life and low cost are required. By becoming the SIGFOX Network Operator in the UK, we have strengthened our position as a leading provider of machine-to-machine connectivity services. Our Managing Director of Smart Metering and Machine-to-Machine solutions, Wendy McMillan, said:“Arqiva has the unique breadth of capabilities needed to meet evolving machine-to-machine connectivity requirements across the UK.

Fujitsu and Microsoft collaborate to transform manufacturing processes through IoT innovation HANOVER, Germany and TOKYO, April 12, 2015 /PRNewswire/ -- At the Hannover Messe event, Fujitsu Limited and Microsoft Corp. announced their collaboration to bring innovative operational excellence to manufacturing with the help of Fujitsu devices powered by Windows 8.1 Pro, the Internet of Things (IoT) services of FUJITSU Cloud A5 for Microsoft Azure, and the Fujitsu IoT/M2M (machine-to-machine) platform. Having recognized a solution was needed to optimize processing by both machines and humans, Fujitsu brought together its Eco-Management Dashboard, the IoT/M2M platform, Microsoft cloud services and Windows tablets in a way that could enable managers, engineers and scientists to improve product quality, streamline systems and enhance functionality while reducing costs. This solution is based on the innovative work Fujitsu performed in Aizu-Wakamatsu, Japan. Fujitsu and Microsoft are on the leading edge of advancing the next generation of manufacturing. About Fujitsu About Microsoft