20 Interactive Whiteboard Resources for Teachers. Interactive whiteboards are a great way for teachers to engage classrooms in learning. 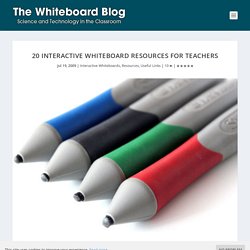 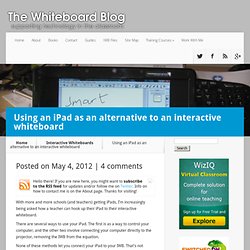 There are several ways to use your iPad. The first is as a way to control your computer, and the other two involve connecting your computer directly to the projector, removing the IWB from the equation. None of these methods let you connect your iPad to your IWB. That’s not possible right now. 1. I’ve written about Splashtop Remote in the past. Now!Board™ - now!Board™ - Learning Resources® Interactive White Boards. 6 Free Online Collaborative Interactive White Boards – 2012 Update November 4, 2012 3 of the original apps from our April 2010 post are no longer available, but here’s 4 more free online IWBs to check out, and they’re all collaborative! 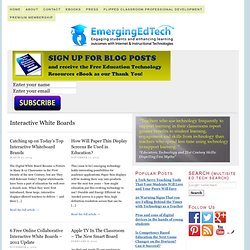 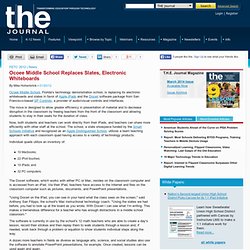 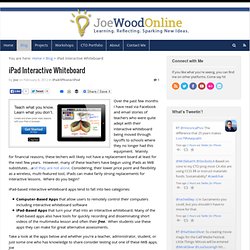 Mainily for financial reasons, these techers will likely not have a replacement board at least for the next few years. However, many of these teachers have begun using iPads as IWB substitutes…and they are not alone. Considering, their lower price point and flexibility as a wireless, multi-featured tool, iPads can make farily strong replacements for interactive lessons. Where do you begin? Alternatives to Interactive Whiteboards. SmartBoards, Promethean Boards and many other kinds of Interactive Whiteboards are a good tool, but not every room has them and, personally, I don’t think they are worth the money. 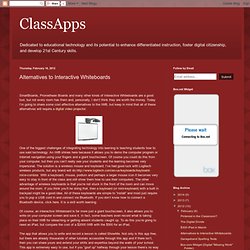 Today I’m going to share some cost effective alternatives to the IWB, but keep in mind that all of these alternatives will require a digital video projector. One of the biggest challenges of integrating technology into learning is teaching students how to use said technology. An IWB shines here because it allows you to demo the computer program or Internet navigation using your fingers and a giant touchscreen. Of course you could do this from your computer, but then you can’t really see your students and the learning becomes very impersonal. The solution is a wireless mouse and keyboard; I’ve had good luck with Logitech wireless products, but any brand will do. Of course, an Interactive Whiteboard is far more just a giant touchscreen, it also allows you to write on your computer screen and save it. Interactive Whiteboard Alternatives using Wii Remote or the iPad - ES 380 - Prindle. An interactive whiteboard or SmartBoard is a larger interactive display that connects to a computer and projector within the classroom. 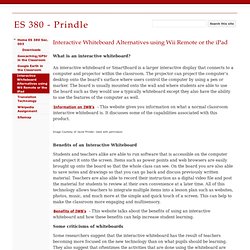 The projector can project the computer’s desktop onto the board’s surface where users control the computer by using a pen or marker. The board is usually mounted onto the wall and where students are able to use the board such as they would use a typically whiteboard except they also have the ability to use the features of the computer as well. Information on IWB's - This website gives you information on what a normal classroom interactive whiteboard is.

It discusses some of the capabilities associated with this product. Image Courtesy of Jacob Prindle- Used with permission. Apple TV In The Classroom – The New Smart Board. An iPad and Apple TV can combine to provide an advantageous alternative to more expensive, traditional interactive white boards. 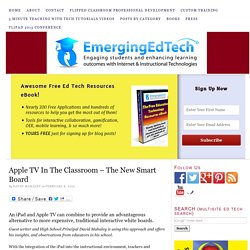 Guest writer and High School Principal David Mahaley is using this approach and offers his insights, and observations from educators in his school. With the integration of the iPad into the instructional environment, teachers and students have discovered many new ways in which the device can expand and enhance the learning environment. With the iPad, the Apple TV can offer a flexible, complete, and cost efficient alternative to the traditional interactive boards populating our classrooms.

As a school administrator and teacher, I have explored the Apple TV and its offerings as an alternative to one of the many types of interactive whiteboards currently available to instructors. We have committed our school to issuing every high school student and instructor an iPad. Image by K.Walsh, Apple TV logo source: www.apple.com/appletv Print This Post. Smart Boards VS Apple TV with iPads. ATReC: Interactive Whiteboards and Simulation Systems. Are Interactive White Boards Dead? By Robert J. 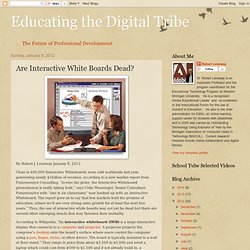 Leneway January 8, 2012 Close to 600,000 Interactive Whiteboards were sold worldwide last year, generating nearly $1billion of revenue, according to a new market report from Futuresource Consulting. “Across the globe, the Interactive Whiteboard phenomenon is really taking hold,” says Colin Messenger, Senior Consultant, Futuresource with “one in six classrooms” now hooked up with an Interactive Whiteboard. The report goes on to say that few markets hold the promise of education, where we’ll see very strong sales growth for at least the next five years.” Thus, the use of interactive white boards may not yet be dead but there are several other emerging trends that may threaten their mortality.

Related:  20 Interactive Whiteboard Resources for Teachers   -  The Whiteboard Blog - Supporting the use of technology in the classroom   -  Education   -  Enterprise