Practically off the grid! » How to Make Your Own High Efficiency Refrigerator. IcyBall Operations Manual. Steam Dome - The steam dome must be filled only when the unit is first put in operation or after cleaning. 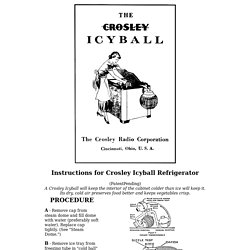 At other times it fills itself when the hot ball is placed in the tub of water, after heating. This operation will completely fill the dome. When the unit is placed in the draining position before the next heating, the excess water will drip out of the whistle until the water reaches the level for proper operation. Soft water should be used where available so that the continual boiling will not form scale, which has a tendency to stop up the whistle and vent. The steam dome should be flushed out occasionally, using sal soda to dissolve and remove scale. Draining - The unit must be placed in the draining position (Figure 1) before each heating. To test for complete draining, place your hand on the bottom of the cold ball - (which will feel warm from the hot water) - and tip unit slowly from draining position to its normal position on the floor. 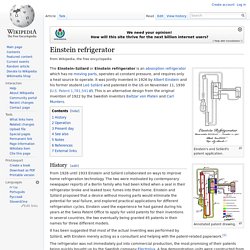 Annotated patent drawing. History[edit] From 1926 until 1933 Einstein and Szilárd collaborated on ways to improve home refrigeration technology. The two were motivated by contemporary newspaper reports of a Berlin family who had been killed when a seal in their refrigerator broke and leaked toxic fumes into their home. Einstein and Szilárd proposed that a device without moving parts would eliminate the potential for seal failure, and explored practical applications for different refrigeration cycles. It has been suggested that most of the actual inventing was performed by Szilárd, with Einstein merely acting as a consultant and helping with the patent-related paperwork.[1] The refrigerator was not immediately put into commercial production, the most promising of their patents being quickly bought up by the Swedish company Electrolux.

Operation[edit] The absorber works by removing ammonia vapor by dissolving it in water. Present day[edit] Crosley IcyBall. Crosley bought the rights to the Icyball refrigeration idea, and brought it to market. 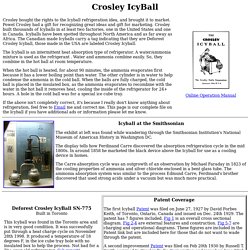 Powel Crosley had a gift for recognizing great ideas and gift for marketing. Crosley built thousands of Icyballs in at least two factories, one in the United States and one in Canada. Icyballs have been spotted throughout North America and as far away as Africa. The Canadian made Icyballs carry a tag indicating that they are Deforest Crosley Icyball, those made in the USA are labeled Crosley Icyball. The Icyball is an intermittent heat absorption type of refrigerator. When the hot ball is heated, for about 90 minutes, the ammonia evaporates first because it has a lower boiling point than water.

If the above isn't completely correct, it's because I really don't know anything about refrigeration, feel free to Email me and correct me. Building Your Own Larry Hall Icyball. DISCLAIMER: The following is information only on things I did. 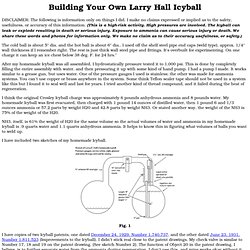 I make no claims expressed or implied as to the safety, usefulness, or accuracy of this information. (This is a high-risk activity. High pressures are involved. The Icyball can leak or explode resulting in death or serious injury. Exposure to ammonia can cause serious injury or death. The cold ball is about 5" dia. and the hot ball is about 6" dia.. After my homemade Icyball was all assembled, I hydrostatically pressure tested it to 1,000 psi. I think the original Crosley Icyball charge was approximately 6 pounds anhydrous ammonia and 8 pounds water.

NH3, itself, is 61% the weight of H20 for the same volume so the actual volumes of water and ammonia in my homemade Icyball is .9 quarts water and 1.1 quarts anhydrous ammonia. I have included two sketches of my homemade Icyball. Fig. 1 Fig. 2 I found that regenerating the system slowly is better than trying to regenerate it too fast (two hours is better than one hour).