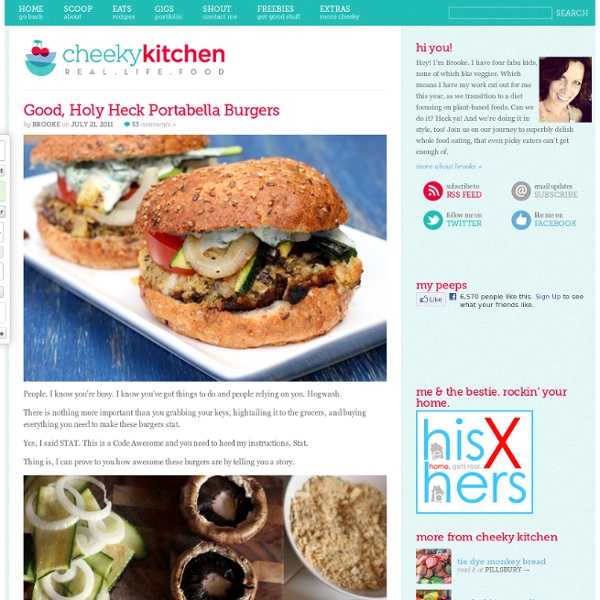 People. I know you’re busy. I know you’ve got things to do and people relying on you. Hogwash. There is nothing more important than you grabbing your keys, hightailing it to the grocers, and buying everything you need to make these burgers stat. Yes, I said STAT. Thing is, I can prove to you how awesome these burgers are by telling you a story. I was working on a bunch of freelance recipes this morning. Do you see where this is going? Hmmm. And then, good high and holy heck. Topped with tomatoes. Suddenly I realized…Tablespoon wasn’t getting this recipe. Yes, I just said Basil Mayonnaise. Hello? What?! Because I didn’t want to do this to you. These are seriously the best portabella burgers ever.

Sumac Ginger Tofu, Quinoa, Broccoli, Mushrooms Today I'm infusing some creative flavors into a basic plate of quinoa, tofu and veggies. I add the spicy sweet flavors of sumac, ginger, coconut, maple and tamari. Red quinoa is the perfect nutty grain to accent this sublime plate. I love this plate as a sturdy lunch. Spanish Mushrooms with Garlic and White Wine - Recipe for Setas con Ajo y Vino Blanco “Setas” or mushrooms are very popular in Spain. Many people drive or walk out to the countryside and spend the day picking them, especially after an autumn rain. The Autumn is a great time for mushrooms and this dish is easy and quite delicious served with bread as a “tapa,” as an accompaniment to a beef, lamb or pork roast, steak or chops.

Vegetarianism A variety of vegan and vegetarian deli foods. Vegetarianism is the practice of abstaining from the consumption of meat – red meat, poultry, seafood and the flesh of any other animal; it may also include abstention from by-products of animal slaughter.[2][3][5] Vegetarianism can be adopted for different reasons. What is the meaning of abracadabra in hebrew I took this from Wiki as it describes the words etymology best; Theories about the source of the word are: In latin based languages the word Abre or Abri means "To Open" and a Cadaver is a corpse. So the incantation that is used in these old movies and cartoons is a litteral Spell Phrase taken from the Occult practice of Necromancy...

Garlic Mushrooms Recipe Step 1 Heat a large frying pan over high heat. Add the oil and swirl to coat. Add the mushroom and garlic, and cook, stirring often, for 2 minutes. Semi A semi-vegetarian or flexitarian[1][2] diet is one that is plant-based with the occasional inclusion of meat products.[3][4][5][6][7] In 2003, the American Dialect Society voted flexitarian as the year's most useful word and defined it as "a vegetarian who occasionally eats meat".[8] In 2012, the term was listed for the first time in the mainstream Merriam-Webster's Collegiate Dictionary.[9] Difference between similar terms[edit] Vegetarianism is the practice of abstaining from the consumption of meat.

Turn Dead Batteries into Big Money – Seriously Here’s an awesome (legit) tutorial: “I just got paid $300 cash for two dozen old lead-acid batteries. Here’s how.” Learn how to find the best places to salvage old car batteries, check which day they’re worth the most, and (of course) get cold hard cash! “I’d accumulated them over the past year, experimented with desulfating them, using the good ones.” So basically this guy went around asking people for batteries, craigslist, freecycle, then turned them in for about $12.50 each.

Vegetarian Chili If you’ve ever tried to make a vegetarian chili, you know how wrong this stuff can go. Some versions call for up to six cans of beans – a recipe for solitary confinement if there ever was one. Others taste like someone dumped a shaker of cumin into a pot of vegetable soup. They just don’t taste like chili. Chili needs to be spicy, meaty (even when there’s not any meat) and thick enough to hold a tortilla chip in place like the Sword in the Stone.