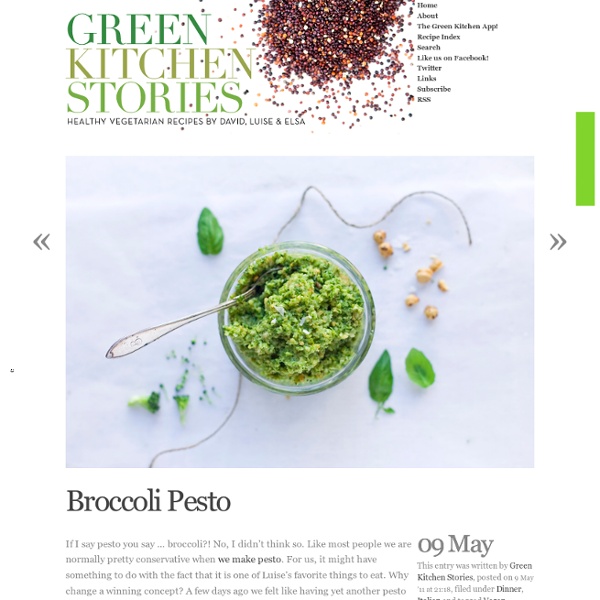 © 2011 Green Kitchen Stories If I say pesto you say … broccoli?! No, I didn’t think so. Like most people we are normally pretty conservative when we make pesto. For us, it might have something to do with the fact that it is one of Luise’s favorite things to eat. Why change a winning concept? Raw broccoli might sound repulsive to some of you, but it is in fact very good in salads. Broccoli Pesto2 cups of pesto We left out cheese to keep it vegan. 1 large broccoli (around 2 cups)A couple of stems fresh basil or sage1/2 lemon, juice1/2 cup hazelnuts (roasted chickpeas if you’re allergic) 2 cloves garlic1/2 cup olive oil2 tbsp watersalt & pepper Throw all the ingredients in a blender or food processor. Luckily Elsa loves vegetables (she always makes her ahmmmm sound whenever we pass the vegetable department), but if you are having problems getting your child to eat greens, pesto is a good trick.

Vegetarian Chili If you’ve ever tried to make a vegetarian chili, you know how wrong this stuff can go. Some versions call for up to six cans of beans – a recipe for solitary confinement if there ever was one. Others taste like someone dumped a shaker of cumin into a pot of vegetable soup. Zucchini Agrodolce I suspect we've talked about this before. I fight a losing battle to keep my kitchen under control. Looking at the counter tops this morning I see - Corsican honey, clary sage-blackberry honey, also olive blossom honey. There are voatsiperifery peppercorns I picked up in Paris months ago, preserved kumquats from the Saturday farmers' market here in San Francisco, dried candy cap mushrooms, dried celery blossoms in a small bowl, camu and wheat grass powders, midnight beans, and a lavender thyme za'atar blend I made over the weekend with dried rose petals and black sesame. The sprawl extends to the refrigerator, cupboards above, and kitchen island behind me.

The Astounding Design Of Eixample, Barcelona Constructed in the early 20th century, Eixample is a district of the Spanish city of Barcelona known for the urban planning that divided the district into octagonal blocks. Influenced by a range of schools of architecture, Eixample Barcelona was designed in a grid pattern with long streets, wide avenues, and rounded street corners. Despite being in the center of a thriving European metropolis, the district provides improved living conditions for inhabitants including extensive sun light, improved ventilation, and more open green space for public use. And of course, the result from the grid-like structure is astounding from above: Worknight Dinner: Creamy Avocado Pasta This post is one that’s long overdue. It’s long overdue because there are few things easier and more delicious than this pasta. I am obsessed with it. Of course, my obsession with avocados is nothing new but the idea of blending avocados into pasta was new to me when Angie made it for dinner one Friday night. The fact that avocados are healthy for you is a delightful bonus. They’re rich, creamy and indulgent – all words that are usually associated with the phrase “need to go to the gym.”

Sumac Ginger Tofu, Quinoa, Broccoli, Mushrooms Today I'm infusing some creative flavors into a basic plate of quinoa, tofu and veggies. I add the spicy sweet flavors of sumac, ginger, coconut, maple and tamari. Red quinoa is the perfect nutty grain to accent this sublime plate. I love this plate as a sturdy lunch. Or to accent a hefty dinner salad. Serve with some sumac-speckled hummus dip and lemon olive oil grilled pita bread for a complete, cravable meal.

40 Creative Food Hacks That Will Change The Way You Cook Who doesn't like something that can make your life easier? Use these cooking hacks to make cooking food a lot easier and enjoyable! We all have our favorite recipes, add these cooking hacks to your everyday recipes! 1. Finds: Awesome Cake Designs Posted by C on Wednesday, June 13, 2012 · [via thisisnthappiness.com] I’m not really that big fan of cakes. The other day, I found these really amusing cake designs that make me want to taste one! Cheeky Kitchen & Good, Holy Heck Portabella Burgers People. I know you’re busy. I know you’ve got things to do and people relying on you. Hogwash. There is nothing more important than you grabbing your keys, hightailing it to the grocers, and buying everything you need to make these burgers stat.

Skinny Spaghetti There is no denying that a delicious bowl of pasta is satisfying and delicious...but did you know that you can still have "pasta" without the carb overload? Spaghetti squash is a delicious and healthy alternative that is high in fiber and low in calories. Once cooked the inside of a spaghetti squash looks just like pasta and you can make it however you would normally make a pasta dish. There are several ways to cook a spaghetti squash. You can microwave it, bake it, boil it or crock pot it.

Best 40 Desserts From Around The World. #1 Had Me Drooling. Share on Facebook After an awesome meal, there is nothing better than a delicious dessert or two… #1. Chocolate Soufflé with Grand Marnier (France) Brown Butter Double Fudge Chocolate Chip Cookie Dough Cookies Little bit of a mouthful there. But it’s like a cookie on top of another cookie! Yeah. Like total dirty cookie on cookie action. Except these ones down below wanted to try a few different positions. I dunno… they’re all mixed up. 365 Days of Pure Vegetarian © Not your usual upma ~ Quinoa Upma Quinoa Quinoa pronounced as Keen-wah protein is a seed that has a crunchy texture and a somewhat nutty flavor when cooked. It is an ancient grain native to South America. It gives great stamina and used in ancient times by warriors.

Zucchini Noodles with Pesto This dish is a play on pesto spaghetti! I used a spirooli to make thin zucchini noodles and tossed it in a creamy pesto sauce. Pesto is usually made exclusively from pine nuts but holy cow they were really expensive at my local store! so I only managed to use part pine nut and added cashews as their poorer alternative.