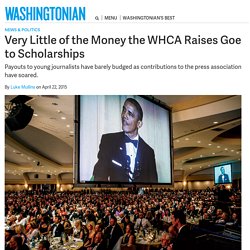 This feel-good segment is one of the ways the WHCA gets to call itself a 501(c)(3) charitable organization, as it was officially designated in 2004- that’s after Ozzy Osbourne first showed at the Washington Hilton but before Stephen Colbert’s roast of George W. Bush made the dinner a traffic-paralyzing national spectacle. Pardon us for a moment, however, while we make like journalists and follow the money. As the event’s profile has risen, contributions to the association have jumped- from 2009 to 2013, the take increased by 162 percent, to $532,555- but scholarship payouts have inched only 10 percent higher, according to the WHCA’s tax filings. When such things are said about other charities, they risk alienating donors.

The WHCA Gave Even Less Money to Scholarships in 2014 and 2015. As political and media hot shots ready their formal wear for DC’s glitziest weekend, it’s time for Washingtonian’s (now) annual audit of the organization behind the White House Correspondents’ Association dinner. 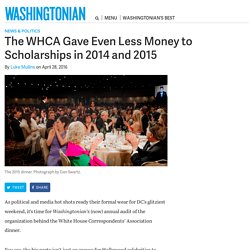 You see, the big party isn’t just an excuse for Hollywood celebrities to swarm Washington and take selfies with West Wing staffers, it’s a fundraising event for the WHCA, a group of hundreds of journalists that, according to its website, works “to ensure a strong free press and robust coverage of the presidency by advocating for access to the president, White House events and administration officials.” The IRS originally designated the association a 501(c)(3) charitable organization in 2004, and the organization has for years funded college scholarships for journalism students. 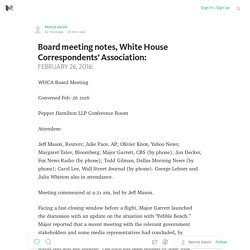 Meeting commenced at 9:21 am, led by Jeff Mason. Facing a fast-closing window before a flight, Major Garrett launchedthe discussion with an update on the situation with “Pebble Beach.”Major reported that a recent meeting with the relevant governmentstakeholders and some media representatives had concluded, byconsensus, that the June 2017 deadline for a design to replace thestatus quo was not feasible. Board meeting notes, White House Correspondents’ Association: — Medium. "Slow Jam the News" with President Obama. President Obama Roasts Donald Trump At White House Correspondents' Dinner! Seth Meyers Destroys Donald Trump @ White House Correspondents Dinner 16 11 2015. Donald Trump was the butt of the joke at the 2011 WHCA dinner. Six years later, he’ll be there as President of the United States. On Tuesday President-elect Trump went out for dinner in New York without a pool of journalists in his ... Whca: On Tuesday Pre. Tmi.me - whca: On Tuesday Pre.

As @maggieNYT pointed out: Part of Trump's motivation to run was the public humiliation of the WHCA dinner; bigger ones happening daily now. Trump ditches reporters goes to dinner, WHCA calls it 'unacceptable' The president-elect has been unusual in the lack of access and notice he's given to his press pool. 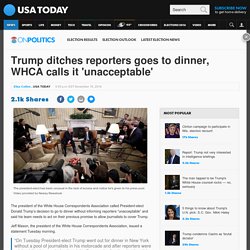 Video provided by Newsy Newslook The president of the White House Correspondents Association called President-elect Donald Trump’s decision to go to dinner without informing reporters “unacceptable” and said his team needs to act on their previous promise to allow journalists to cover Trump. Jeff Mason, the president of the White House Correspondents Association, issued a statement Tuesday morning. “On Tuesday President-elect Trump went out for dinner in New York without a pool of journalists in his motorcade and after reporters were advised that he was in for the night. "Get used to the end of access as you know it." Outstanding advice to US journalists from a South African editor. @jayrosen_nyu Do you think the exercise in sycophancy known as the WHCA dinner should be retained? @eamonn Hell no. But I have thought that for years, putting me in the category savvy journalists call the "humorless scold."