6 Foods To Eat If You're Skipping Meat 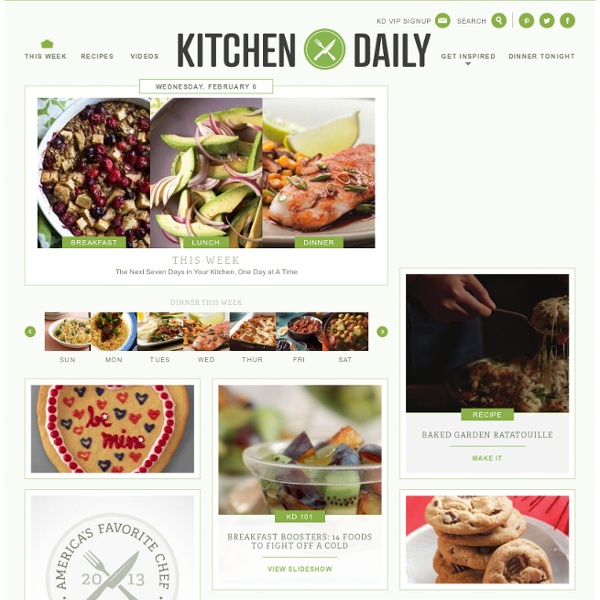 White chocolate lime pudding in a jar Mason jars can turn any dessert into a special occasion treat. This is especially true for this white chocolate lime pudding. This vegan dessert will be sure to satisfy your sweet and tangy side. This amazing vegetarian dessert recipe is from the amazing cookbook Desserts in Jars: 50 Treats that Shine (Harvard Common Press, 2012) by Shaina Olmanson. Mason jars can turn any dessert into a special occasion treat. Petite Lasagnas recipe slightly adapted from Hungry Girl (makes 12) 12 oz raw ground turkey ¼ tsp salt, divided ¼ tsp pepper Greek cuisine Traditional Greek taverna, integral part of Greek culture and cuisine. History[edit] Fresh fish, one of the favourite dishes of the Greeks; platter with red figures, c. 350–325 BC, Louvre. Greek cuisine has a long tradition and its flavors change with the season and its geography.[2] Greek cookery, historically a forerunner of Western cuisine, spread its culinary influence - via ancient Rome - throughout Europe and beyond.[3] It has influences from the different people's cuisine the Greeks have interacted with over the centuries, as evidenced by several types of sweets and cooked foods. It was Archestratos in 320 B.C. who wrote the first cookbook in history. The Byzantine cuisine was similar to the classical cuisine including however new ingredients that were not available before, like caviar, nutmeg and lemons, basil, with fish continuing to be an integral part of the diet.

Portobello Mushroom Burgers (in the oven) I have somewhat been neglecting my 2012 kitchen creation bucket list. Looking for quick and healthy ideas for supper tonight, I went back to the list. How great to cheer up this rainy day than portobello mushroom burgers! I’m not dedicated enough to flip these babies on the BBQ so I’m grilling the burgers in the oven. image source: cleananddelicious.com 4 portobello mushrooms 1/4 cup balsamic vinegar 2 tbsp olive oil 1 tsp dried parsley 1 tbsp minced garlic salt/pepper

Molecular recipies Home » Blog » Gelification New Ocean and Mountain Chef Digilio improvises a new potential dish for his new menu based on an idea he had in mind. A large raviolo made with porcini ... CONTINUE Hot Baileys Ice Cream Strawberry & Chocolate Nachos I’ve said it once and I’ll say it again: sometimes the best creations are the ones you don’t set out to create! This might be my new favorite thing. It’s the perfect easy, throw-together, family style dessert for summer. Beer style Beer style is a term used to differentiate and categorize beers by factors such as colour, flavour, strength, ingredients, production method, recipe, history, or origin. The study of what constitutes a beer's style may involve provenance,[3] local tradition,[4] ingredients,[5] and/or empirical impression, which is conventionally broken down into several elements; typically - aroma, appearance, flavour and mouthfeel.[6] The flavour may include the degree of bitterness of a beer due to bittering agents such as hops, roasted barley, or herbs; and the sweetness from the sugar present in the beer. Types

The Best Grilled Portobello Mushroom Burgers I set out to make a great tasting grilled portobello mushroom burger that even a meat lover would love. The mushrooms are marinated then grilled and topped with melted Swiss Cheese, grilled red onion, tomatoes, spinach, and avocado – yum!! The only thing my husband said would make these burgers better is adding bacon... maybe next time. I wanted to give the mushrooms a meaty flavor, so I marinated them with balsamic, soy sauce and Montreal steak seasoning. These were so good, perfect for meatless Mondays or any night of the week. Grilled Portobello Mushroom BurgersSkinnytaste.com Servings: 4 • Size: 1 loaded burger • Old Points: 6 • Weight Watcher Points+: 8 pt Calories: 295 • Fat: 13 g • Carb: 31 g • Fiber: 11 g • Protein: 21 g • Sugar: 6 g Sodium: 594 mg (without salt) • Cholest: 0 mg