Baked Cheese Appetizer with Mushrooms and Balsamic Butter. Mushroom Stuffed Cabbage Rolls - Vanilla And Bean. Soba Noodle Soup with Mushrooms & Chard — Weeknight Dinner Recipes from The Kitchn. I inevitably eat too much during the holidays, especially when I travel back home to Illinois. 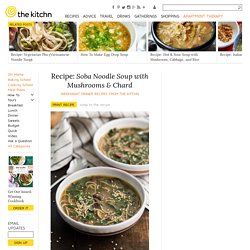 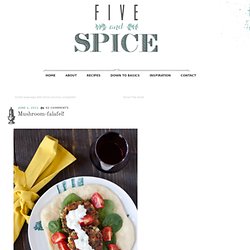 (Yes, the exclamation point is necessary there.) It doesn’t exactly roll off the tongue, I’ll admit. But, what was I supposed to call it? Mushlafel? Portobello Burgers With Collard Greens and Guacamole [Vegan, Raw, Gluten-Free] This is fast food, and it's real good food too. 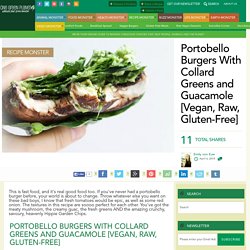 If you've never had a portobello burger before, your world is about to change. Throw whatever else you want on these bad boys, I know that fresh tomatoes would be epic, as well as some red onion. The textures in this recipe are soooo perfect for each other. You've got the meaty mushroom, the creamy guac, the fresh greens AND the amazing crunchy, savoury, heavenly Hippie Garden Chips. Portobello Burgers With Collard Greens and Guacamole [Vegan, Raw, Gluten-Free] Ingredients. Sauteed Mushroom Gouda and Kale Potato Skins. The other night I was discussing reality television with a friend of mine.We both agreed that reality TV was somehow interesting at first, but the fact that it's gotten so over-abused proves that its 15 minutes have largely passed. 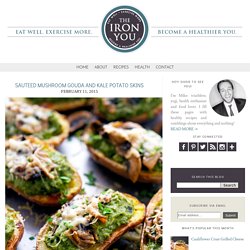 Nowadays, every channel has a reality show about pretty much everything: drive a truck on ice -> get a show; have a bunch of kids -> get a show; have an embarrassing complaint/lump -> get a show; make your daughter a star -> get a show; be a complete idiot -> get a show.It’s not even interesting anymore.Even cooking shows are getting boring and old to watch. There are too many of them: Top Chef, Master Chef, Chopped, Hell’s Kitchen, The Taste, The Kitchen, The Next Food Network Star, the list goes on forever. Don’t get me wrong, I most certainly appreciate the creative input. Vegetarian Lentil and Mushroom Meatballs. MUSHROOM BURGERS WITH ASIAN SLAW. Caroline, I remember when I first got your email. 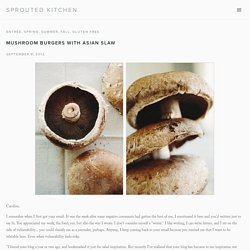 It was the week after some negative comments had gotten the best of me, I mentioned it here and you'd written just to say hi. Portabella and Halloumi "Burgers" from Food for My Family. May 2nd, 2011 Shaina Olmanson is the food writer, home cook and photographer behind Food for My Family and Olmanson Photography. 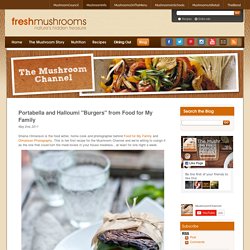 This is her first recipe for the Mushroom Channel and we’re willing to cosign it as the one that could turn the meat-lovers in your house meatless…at least for one night a week. I spent several years as a vegetarian, and it’s a lifestyle that still sings to me, calls me even. Contrast that to my husband’s classic Midwestern meat-and-potatoes upbringing, sandwich them together and you’ll find us today where navigating the landscape of real food, and seeking to fuel our four children’s bodies with the best nutrition available, settled quite happily into omnivore status.

With an effort to change the way we think of food and the way we eat our food comes giving and taking, and sometimes it also means exploring those meatless meals for my husband, who loves vegetables but prefers to pair them with a side of meat (to help fill him up). Makes 2 servings. Of note: Massaged Kale Salad with Lentils and Buttery Mushrooms. This week has been pretty rough. 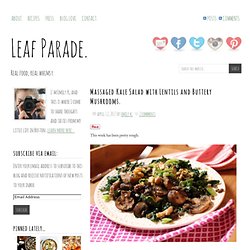 Since Monday morning, I have had the feeling that something has been, oh, just a little bit off. Mushroom and farro soup. Barely two weeks ago, I used the following phrases to describe soup: “vegetables boiled to death,” “assaulted with too much cream,” “whatever healthy things in there cannot be tasted,” and even “what must have been a practical joke” about an especially awful one I’d ordered recently. 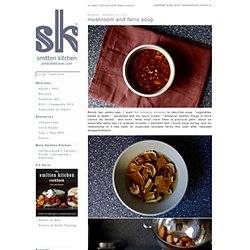 I admitted that I found soup boring, and my relationship to it has been on especially unstable terms this year after repeated disappointments. We then proceeded to eat soup for dinner for the next 14 days. What happened? It turns out that baked potato soup is a gateway drug, in that when we finished it, we wanted more soup. Different soup. Ayocote Bean & Mushroom Salad Recipe. Steve Sando of Rancho Gordo writes one of my favorite newsletters. 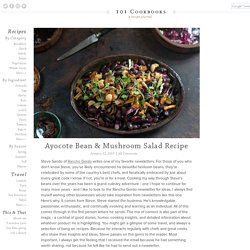 For those of you who don't know Steve, you've likely encountered his beautiful heirloom beans, they're celebrated by some of the country's best chefs, and fanatically embraced by just about every great cook I know. If not, you're in for a treat. Cooking my way through Steve's beans over the years has been a grand culinary adventure - one I hope to continue for many more years - and I like to look to the Rancho Gordo newsletter for ideas. I always find myself wishing other businesses would take inspiration from newsletters like this one.

Here's why. Portabella Mushrooms stuffed with Herbed Chickpeas. Vegan Recipe. Mushroom Casserole Recipe. I had one favorite thing to eat when I was a kid. 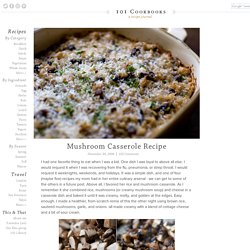 Mushroom + stout pot pies with sweet potato crusts. I decided that I wanted this year to be challenging and adventurous. Those are the only concepts/freeform goals that I’m taping up in the most visible spot of my mind for the time. Nothing quantifiable. Meg's Marinated Mushrooms recipe on Food52. Author Notes: This recipe is inspired by my sister. She loves mushrooms and she recently gave me some fennel pollen. I thought fennel pollen would add a nice flavor to marinated mushrooms. Mushroom & Hazelnut Loaf. © 2010 Green Kitchen Stories We all need a good loaf recipe. Especially in the winter when you are starting to get tired of all those soups, stews and pastas, but still feel like making something special. We’ve tried a couple of different ones and this is by far our favorite. Mushrooms on Toast recipe on Food52. Quinoa Mushroom Pilaf.

New Queen on the Block. Mushroom-falafel! Portobello Fries. Not sure if you all recall, but a few months ago a reporter asked Kate Moss what one of her favorite quotes was. Smoked Portobello and Gruyere Reuben recipe on Food52.com. Cooking is more fun with friends. Find your friends who are already on Food52, and invite others who aren't to join.