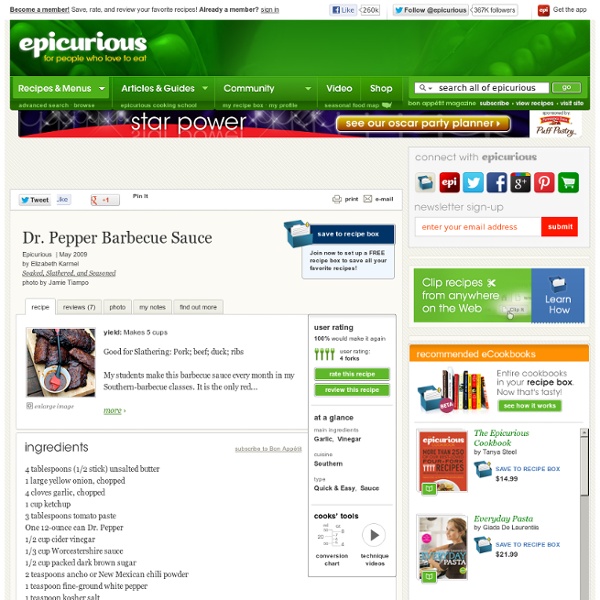 I too love this bbq sauce but have added my own twists. I only had salted butter so I omitted the salt, then melted the butter and skimmed the butter fats before adding the onions and garlic, so it was essentially clarified butter. I also like a nice cherry flavor so I used a mix of half dr pepper half black cherry soda, but I bet cherry dr pepper would also do the trick. I also didn't have the ancho chili powders, but I did have some scotch bonnet sauce which I used about a teaspoon. My wife doesn't like the spicy bbq sauces, so I gotta keep it on the low, for me, I would probably triple that amount or more.

Peter Clifford Online [tweetthis] TIMELINE – 18th JULY 2012 10.14 GMT: In Libya’s first elections since 1965 (but no political parties allowed) and first totally free elections since 1952, a liberal, secular union, the National Forces Alliance, won 39 out of the 80 seats reserved for political parties. A Happy Voter in Libya’s Elections The National Forces Alliance is led by Mahmoud Jibril, who acted as Libya’s first interim Prime Minister after the fall of Gaddafi.

Watermelonade Recipe at Epicurious photo by Roland Bello yield Makes 1 gallon (serves 16) active time 30 min total time 30 min You would be hard-pressed to find something more refreshing than watermelon. This cooler is easy to make, beautiful to behold, and not too sweet. Sticky Balsamic Ribs OK, Folks. No joke, these are the best ribs ever!! I always look at reader reviews when I choose a recipe. They help me decide whether a recipe is worth it, or not.

My Brother’s Chicken Tacos Before I share this recipe with you, let me warn you: it’s a royal mess. But as is the case with many messy dishes (cinnamon rolls, anyone?), it’s also darn delicious. These are my brother’s chicken tacos. He made them for dinner at our house last night. Favorite Recipes Classic and favorite recipes, including popular family recipes, regional recipes, light recipes, party fare, and more. Everyday Meals Main dish and side dish recipes for any day of the week, including delicious chicken recipes, beef recipes, vegetables, and more. Desserts and Sweet Treats A big variety of desserts, including cakes, pies, candy, cheesecakes, fruit recipes, cobblers, cookies, and brownies.

World powers rush in to rebuild Libya - Africa As the endgame of the Muammar Gaddafi regime plays out in Libya, members of the international community - from world powers to oil companies - are gathering to discuss their respective roles in the country's future. Decades of partial isolation imposed by Gaddafi have left the oil-rich country's economy reeling from a raft of sanctions and its government in a diplomatic no man's land. The rebel government, or National Transitional Council (NTC), has said it intends to change all that.

Ryan’s Bolognese Sauce The thing about my recent houseguest Ryan is that he’s an exceptional cook. Bottom line: the guy just flat knows what he’s doing in the kitchen, wrestling pretty much any ingredient to the ground with complete confidence. If he wasn’t a minister, I’d say he missed his calling.

Big Red Kitchen: More in the Freezer: Cheeseburgers In an effort to health up my family’s lunches, I am steering away from those frozen prepackaged sandwiches that saved me back in my busy December, to homemade frozen sandwiches, and so far so good. The Frozen Chicken Sandwich was a huge hit with my kids so I moved on to trying the Cheeseburger by simply increasing the size of my White Castle-like Sliders. Start by sprinkling a large 11×17 inch pan with dried minced onions and pressing 2.5 pounds of ground beef over top. Sprinkle with season salt (I use Penzey’s) and bake in a 375 degree oven for 18 minutes.

New York Style Chopped Salad I made a salad last Friday that was inspired by some scrumptious and enjoyable salad bar experiences I’ve had during recent trips to New York City…where my older daughter and I happen to be visiting this week. Here’s how the New York salad bars go, and maybe I need to get out more, but I just think it’s miraculous: There are different selections of greens, then basically any and every salad topping you can think of: kidney beans, avocado, mushrooms, olives, tomatoes, etc. Like, at least fifty toppings. Then the guy/gal behind the counter says “What greens do you want?” And you tell them the greens you want. And they grab some of those greens with tongs and throw them into a clean stainless bowl.

White Chocolate Key Lime Pie Is anyone else as giddy as me that today’s the first day of spring? I’m absolutely ecstatic! That means all this gorgeous weather we’ve been having here in New York isn’t just a cruel prank. Cinnamon Sugar Pull-Apart Bread — Joy the Baker - StumbleUpon I’m sorry. I know it’s Monday morning and you probably came here for some pretty pictures of food that you could glance at, and then move on with your day… and here I go thrusting warm, soft cinnamon sugar bread in your face. It’s not fair. I know it’s not fair.

Cherry Coke & Jalapeño Meatballs Well, they’re actually cherry coke & jalapeño glazed meatballs, but that didn’t fit into the excerpt title on my landing page. Shrugs. These are my go to snack meatballs, but don’t let me stop you from having them for dinner.