Mango Chutney Ginger Cucumber Cups. Lentil Mushroom Walnut Balls [Vegan, Gluten-Free] The students at Natural Epicurean Academy of Culinary Arts love crafting food that is not only tasty, but good for you too. 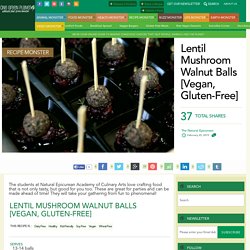 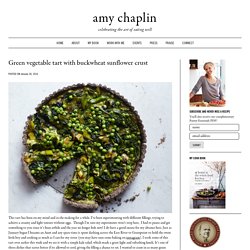 I’ve been experimenting with different fillings, trying to achieve a creamy and light texture without eggs. Though I’m sure my experiments won’t stop here, I had to pause and get something to you since it’s been awhile and the year no longer feels new! I do have a good excuse for my absence here. Just as January began I became an Aunt and any spare time is spent dashing across the East River to Greenpoint to hold the sweet little boy and cooking as much as I can for my sister (you may have seen some baking on instagram).

Not Just an Egg Salad. Whenever we visit Luise’s family in Denmark we also eat smørrebrød. 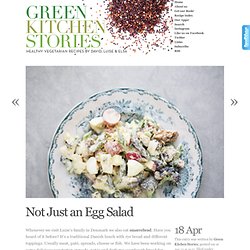 Half Baked Harvest - Made with Love. Hehe. 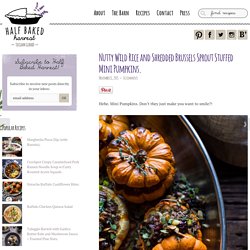 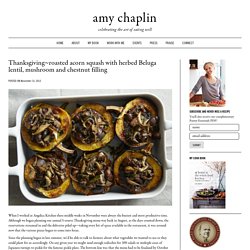 Although we began planning our annual 5-course Thanksgiving menu way back in August, as the days counted down, the reservations streamed in and the deliveries piled up—taking every bit of space available in the restaurant, it was around now that the various pieces began to come into focus. Since the planning began in late summer, we’d be able to talk to farmers about what vegetables we wanted to use so they could plant for us accordingly. Deciding on the two mains that would be offered on the menu was the first step and always the most involved. Swiss Chard, Sweet Potato, and Feta Tart in a Teff Crust. Make the crust Combine both flours and the salt in a food processor; pulse to combine. 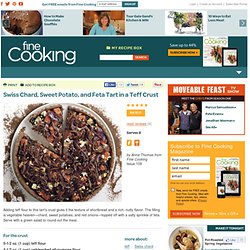 Add the butter and pulse until it breaks down to the size of small peas. Sprinkle 4 Tbs. of the ice water over the mixture and pulse again until the pastry just holds together (if it’s too dry to hold together, pulse in tiny amounts of the remaining water until it holds). Transfer the dough to a large sheet of plastic wrap, and using the plastic as an aid, shape it into a thick disk. Wrap the dough in the plastic and refrigerate for about 30 minutes. Meanwhile, position a rack in the center of the oven and heat the oven to 375°F.

The Bojon Gourmet: Gluten-Free Chocolate, Cherry, and Chèvre Cream Tarts. In addition to their awesome bulk section and farmer's market caliber produce, one of the reasons I prefer shopping at our local mega-co-op, Rainbow Grocery, is the tough love. 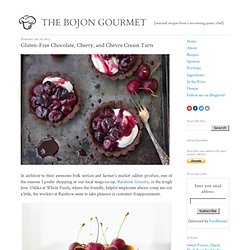 Unlike at Whole Foods, where the friendly, helpful employees always creep me out a little, the workers at Rainbow seem to take pleasure in customer disappointment. And yet, masochistically, I don't mind the bitchy workers. It's the annoying Rainbow customers that drive me crazy. The other day, I was at Rainbow pawing through peaches. They didn't look or smell that great, but I was prepared to overlook that fact, as well as their exorbitant price, in anticipation of the rhubarb peach pie they would become. When I shrugged, the man bustled over to the produce stocker and asked to be advised as to the best peaches. Raw Chocolate Bourbon Tartlets with Chocolate Hazelnut Crust - DOWNTOWN EPICURE. BROWNIE GANACHE TART WITH WHIPPED COCONUT CREME. WALNUT BROWNIE TART WITH GANACHE & WHIPPED COCONUT CREME (Gluten-free, Dairy-free) Adapted from David Lebovitz 4 tablespoons coconut oil 2 tablespoons walnut oil 6 oz. semisweet chocolate, chopped 3/4 cup natural cane sugar 1 teaspoon vanilla. 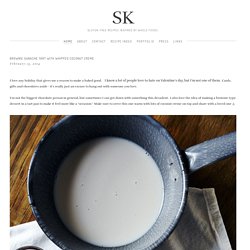