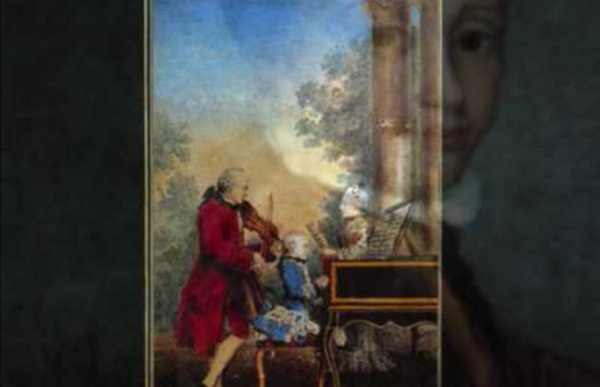 www.britannica Exsultate, Jubilate, K 165, (Latin: “Rejoice, Be Glad”) three-movement motet (short sacred composition for voice sung with or without an orchestra) written by Wolfgang Amadeus Mozart in 1773, when the composer was still in his teens. (A revision of the instrumentation and text followed in 1779 or 1780.) Britannica Quiz A Study of Music Samuel Barber (1910-1981) Biography[edit] Early years[edit] Childhood home of Samuel Barber in West Chester, Pennsylvania Barber was born in West Chester, Pennsylvania, the son of Marguerite McLeod (née Beatty) and Samuel Le Roy Barber.[2] He was born into a comfortable, educated, social, and distinguished American family. His father was a physician; his mother, called Daisy, was a pianist of English-Scottish-Irish descent whose family had lived in the United States since the time of the Revolutionary War.[3] His aunt, Louise Homer, was a leading contralto at the Metropolitan Opera; his uncle, Sidney Homer, was a composer of American art songs.

en.m.wikipedia Exsultate, jubilate (Exult, rejoice), K. 165, is a 1773 motet by Wolfgang Amadeus Mozart. History[edit] Structure[edit] Adagio for Strings History[edit] Barber's Adagio for Strings began as the second movement of his String Quartet, Op. 11, composed in 1936 while he was spending a summer in Europe with his partner Gian Carlo Menotti, an Italian composer who was a fellow student at the Curtis Institute of Music.[2] The inspiration came from Virgil's Georgics. In the quartet the Adagio follows a violently contrasting first movement (Molto allegro e appassionato) and is succeeded by music which opens with a brief reprise of the music from the first movement (marked Molto allegro (come prima) – Presto).[3] www.britannica Requiem in D Minor, K 626, requiem mass by Wolfgang Amadeus Mozart, left incomplete at his death on December 5, 1791. Until the late 20th century the work was most often heard as it had been completed by Mozart’s student Franz Xaver Süssmayr. Later completions have since been offered, and the most favourably received among these is one by American musicologist Robert D. Levin. Britannica Quiz

Religious music David playing his harp (unknown artist, c. 960). The book of Psalms, included in the Jewish and Christian scriptures, and said to have been written largely by David, is one of the earliest collections of sacred music, and still plays a role in the liturgies of the two religions. Religious music (also sacred music) is music performed or composed for religious use or through religious influence. Christian music[edit] The earliest music in the Christian Church came from Jewish worship music. It is believed that this music lay somewhere between singing and speaking, or speaking with an understood ritual cadence.[1]

www.redlandssymphony I. Allegro II. Andante ma adagio III. Rondo: Tempo di menuetto Composed 1774. The symphonies that bookend this evening’s program were two of the last works Mozart wrote in Salzburg before striking out on his own in Vienna. Church music Church music is music written for performance in church, or any musical setting of ecclesiastical liturgy, or music set to words expressing propositions of a sacred nature, such as a hymn. History[edit] Early Christian music[edit] Christianity began as a small, persecuted Jewish sect. At first there was no break with the Jewish faith; Christians still attended synagogues and the Temple in Jerusalem just as Christ had done, and presumably still carried on the same musical traditions in their separate Christian meetings. The only record of communal song in the Gospels is the last meeting of the disciples before the Crucifixion.[1] Outside the Gospels, there is a reference to St.

www.britannica Piano Sonata No. 11 in A Major, K 331, three-movement sonata for solo piano by Wolfgang Amadeus Mozart, written 1781–83. It is best known for its third movement, written “in the Turkish style,” which is often heard in transcriptions for instruments other than the piano. Britannica Quiz Lifting the Curtain on Composers: Fact or Fiction? Ludwig van Beethoven was married six times. Mozart composed about 20 solo piano sonatas, from roughly 1775 through the summer of 1789. www.britannica Symphony No. 40 in G Minor, K. 550, symphony by Wolfgang Amadeus Mozart. Composed in 1788, it is one of only two symphonies he wrote in minor keys and reflects his interest in the artistic movement known as Sturm und Drang (Storm and Stress), in which darker and stronger emotions were showcased. The year 1788 was a dark one for Mozart. Viennese audiences were proving less eager to hear his concerts and recitals, bills were piling up, and his infant daughter Theresia had just died. Letters to friends reveal that he was finding it difficult to look beyond the shadows, and some have suggested that this fact influenced this unusually anxious symphony. Yet there is more at work here than one man’s daily sorrows.