We’re not building skyscrapers in Stratford to protect the views from Richmond Park. Whenever I’ve suggested – sometimes gently, sometimes not – that London might soon need to build housing on its green belt, someone has almost instantly replied, “What about brownfield?” 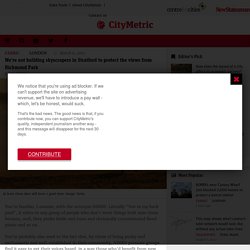 Brownfield, you see, is the label for any site which has already been built on: its redevelopment is thus seen as the cost free option, which won’t necessitate any hard choices about which fields we’re going to brick over. Never mind that no one seriously thinks there’s enough of this stuff to meet housing need: so long as there’s a square inch of brownfield left, the NIBMY lobby will say, we shouldn’t even think about looking at reviewing the green belt. Which is a problem. You've Had Your Fun, But Let's Put The Garden Bridge To Bed Now. Rachel Holdsworth has weighed up the arguments for and against the Garden Bridge and is left unimpressed. 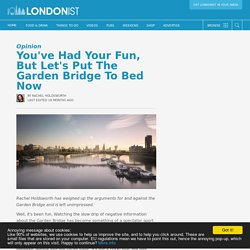 Well, it's been fun. Watching the slow drip of negative information about the Garden Bridge has become something of a spectator sport for some Londoners. But with a construction start date in less than six months, it's time to stop playing and put this thing back in its box. Heatherwick's secret Garden Bridge meetings revealed. London mayor Boris Johnson or senior members of his team held at least five meetings on the Garden Bridge with Thomas Heatherwick before the launch of the design contest for the bridge - a competition the designer went on to win. 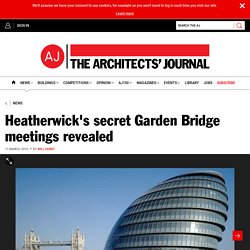 A Freedom of Information (FOI) response to the Architects’ Journal from the mayor’s office (see attachment) has revealed Heatherwick attended four official meetings at the highest levels of London government about the Garden Bridge ahead of the invited competition organised by Transport for London (TfL). As has previously been reported, Heatherwick also met Johnson in San Francisco in early February 2013 to discuss a possible sponsorship deal with Apple - a meeting which took place just days before TfL’s invited tender went out later that month.

London gentrification: Social media data provides 'warning' of Borough gentrification. The gentrification of London boroughs can be predicted from tweets and Foursquare check-ins, researchers at Cambridge University have found. 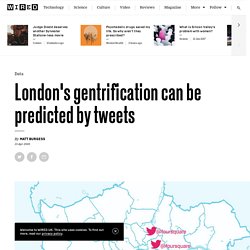 By combining social media data – indicating a more affluent visitor to an area – with statistics on rising house prices and dropping crime rates, the computer science researchers were able to show a link with gentrification. Rather unsurprisingly, Hackney was identified. Based on 2010 census data the borough had the highest social diversity but the second-highest deprivation, making it a prime candidate for gentrification.

This was supported by the UK Index of Multiple Deprivation in 2015 ranking Hackney as the highest climber. Tower Hamlets, Greenwich, Hammersmith and Lambeth are next on London's gentrification list, the researchers claimed. Mayor Says Garden Bridge Would Cost More To Cancel Than Go Ahead. Thames garden bridge scrapped by Sadiq Khan. Diesel drivers will have to pay extra to park in central London. Diesel car drivers are to be hit with a £2.45-an-hour “D-charge” to park in a swathe of central London to combat toxic air. 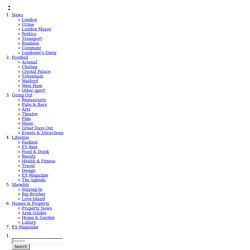 Westminster City Council is to become the first town hall in Britain to impose the surcharge for pay-to-park bays. The “D-charge” will be trialed at 1,424 parking bays in Marylebone, and parts of Fitzrovia and the Hyde Park area from April 3. Motorists driving diesel models will have to pay an extra 50 per cent on the normal charge, £4.90-an-hour, to park their car or van in a bay. The maximum stay is four hours, so the diesel levy could total £9.80. “Residents and visitors tell us all the time that air quality is a key concern in central London,” said Councillor David Harvey, Westminster’s Cabinet member for environment, sports and community. 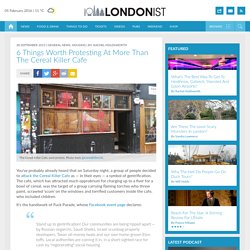 The cafe, which has attracted much opprobrium for charging up to a fiver for a bowl of cereal, was the target of a group carrying flaming torches who threw paint, scrawled 'scum' on the windows and terrified customers inside the cafe, who included children. It's the handiwork of Fuck Parade, whose Facebook event page declares: Stand up to gentrification! Our communities are being ripped apart — by Russian oligarchs, Saudi Sheiks, Israeli scumbag property developers, Texan oil-money twats and our own home-grown Eton toffs. Local authorities are coining it in, in a short-sighted race for cash by "regenerating" social housing.We don't want luxury flats that no one can afford, we want genuinely affordable housing. Thing is, we agree with much of this, but trashing an independent business is the wrong target. One Hyde Park. Wrong kind of sunlight delays Southeastern trains in London. Rail passengers have expressed their anger after being told trains were delayed due to “strong sunlight”. 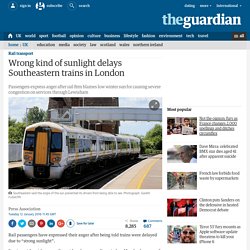 Services at Lewisham, south-east London, were disrupted on Monday because of the angle of the sun, the train operator Southeastern said. The rail firm tweeted: “We had severe congestion through Lewisham due to dispatching issues as a result of strong sunlight.” It added: “The low winter sun has been hitting the dispatch monitor which prevents the driver from being able to see.” But some travellers were unimpressed by the explanation. Julie Clarke asked Southeastern: “How do they go on in hot countries where they have sunshine all the time?” London has the most expensive public transport in the world, claims research. London mayoral hopeful Tessa Jowell has released research that reveals that London has the highest public transport fares in the world, when compared with other global cities. 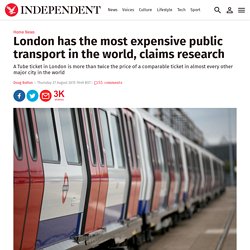 London beat the other top 20 cities in the world, such as New York, Paris and Hong Kong, to claim the dubious title. A Zone 1-6 Tube ticket in London at a peak time costs travellers £5.10. Using this long journey as a benchmark, the research found that tickets in London are more than twice the price of almost every city in the top 20 - excluding Washington DC, where the equivalent single fare is £3.79. Putting it in comparison, the research found that this London ticket is four times the cost of a comparable fare in Paris, three times more than New York, and ten times more expensive than Moscow. Six reasons Londoners should probably stop whining about the tube strike.

A canal cuts through an urban landscape. 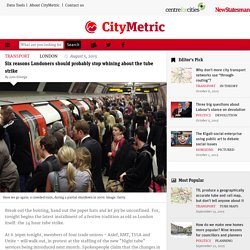 It’s overlooked by angular facade of a Grade II listed Victorian brewery. It’s been sympathetically converted into loft apartments, live-work spaces and artist studios. 'Vast social cleansing' pushes tens of thousands of families out of London. Tens of thousands of poor families have left inner London in the past five years, creating “social cleansing on a vast scale” and leaving large parts of the capital as the preserve of the rich, figures suggest. 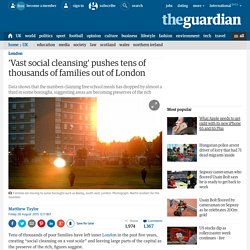 The extent of the problem is revealed in data that shows the number of children entitled to free school meals, a widely used indicator of deprivation, has dropped by almost a third in some London boroughs since 2010. The figures portray a mass shift of poorer families from inner London just when the government has introduced a raft of changes to the welfare system. Although there is no definite link between welfare reforms and the reduction in free school meal claimants, Sadiq Khan, the prospective London mayoral candidate who obtained the figures, said government policies were creating an increasingly segregated city. Overloaded London GPs cannot cope, warns report. GP surgeries in London are at “saturation point” and cannot provide any more care to patients, family doctors’ leaders in the capital have warned in a dossier of evidence sent to MPs. Representatives of 7,000 GPs at 1,300 practices claim they cannot cope with existing demand and that the situation will get worse as London’s population soars to 9.2 million by 2020.

Cuts to health visiting, community nursing, mental health and other services have turned surgeries into places where patients with nowhere else to go turn up but experience “a revolving door of consultations”, they say. Met police urged to investigate garden bridge contracts. Scotland Yard is to be asked to investigate misconduct allegations involving London mayor Boris Johnson and the Transport for London (TfL) procurement process behind the capital’s proposed garden bridge. Campaigners are to submit a formal complaint to the Metropolitan police over allegations of “malfeasance in public office” regarding the mayor and the decision to award designer Thomas Heatherwick and the engineering firm Arup lucrative contracts for work on the controversial bridge across the Thames.

London’s 24-hour Tube map revealed. How Joanna Lumley charmed ‘dear Boris’ to back her garden bridge dream. London Rental Opportunity of the Week: Sleep on a Single Bed in Someone’s Kitchen. (Photo via) Every week or so – the frequency varies but the bleakness stays the same – there will be an advert for a London property that plumbs new terrible depths of bad bastardry. Rent a bunkbed above a wardrobe, that sort of thing. Pay £1,500-a-month to sleep in someone's shed. You know: the sort of thing that only an estate agent with a ponytail and a thing for cheap gak can truly think is acceptable.

Anyway: we have decided to catalogue all of these in a big effort to worry your mum. What is it? Ever wanted to sleep in a shareflat kitchen? Now you can recapture that fleeting happiness thanks to Joe, an industrious young renter in Kingston, southwest London. London’s Earliest Cinema Set To Reopen. Kensington and Chelsea council says house stripes must go. Thames Baths Launches On Kickstarter. London Snow Pictures Flood The Internet... But Everyone Is Bitterly Underwhelmed. Stop everything. Snowmageddon has hit. A reversed version of the tube map, showing what it would be like if South London got as much love as the North.

Privatised London: the Thames Path walk that resembles a prison corridor. Forget the Hounds. As Foxes Creep In, Britons Call the Sniper. Diamond geezer. London through the eyes of illustrator and graphic designer Edward Bawden. London's garden bridge: the public park where groups and cyclists aren't welcome. “It will set hearts racing and calm troubled minds,” according to the garden bridge’s chief promoter, Joanna Lumley. “It will enchant everyone who uses it.” But not, it turns out, if you’re in a group of eight or more, or if you want to ride a bicycle, or visit Thomas Heatherwick’s bridge by night – and certainly not if you’re planning a protest. A lonely chair in North London: how urban skeuomorphs speak volumes about the city – SciencePunk. I live in Haringey, an as-yet-ungentrified part of North London, and there’s a small park near me with a very curious chair in it. Yes, London is an unfriendly city – and long may it stay that way.

76 thoughts I've had while commuting. 'Killer seagull' attacking pigeons in Hyde Park is caught on camera - UK - News. Visitors to the popular tourist spot said that the bird catches pigeons by the neck and then pulls them into the water, where they drown, after which it shares the remains with its mate. Amateur photographer Johanna van de Woestijne, 57, witnessed the aggressive behaviour when she was walking through the park. She told the Daily Mail that the bird was easy to spot because "he is fairly squat and looks muscular, like a bodybuilder". Bird experts have said that the behaviour is extremely unusual for lesser black-backed gulls, which normally survive on a diet of small fish, insects and crustaceans.